Aaron, possess the tendency to consistently bowl above the 140 kmph mark. 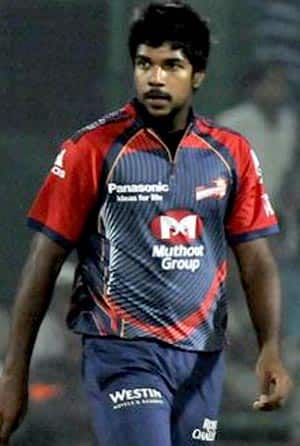 Varun Aaron should be a part of the bowling unit even if India plays only four frontline bowlers, as his inclusion will add a bit of variety to the bowling attack

After a disastrous Test series, a lot was expected of India in the shorter formats. However, England’s ruthless performance has ensured that the visitors’ victory drought continued. India was beaten comprehensively by the hosts in the only T-20 fixture at Old Trafford before victory eluded India, yet again, in the opening match of the one-day series, as persistent rain forced abandonment. The English openers then led their team to another comprehensive win after they made a mockery of India’s opening bowlers in the second One-Day International.

On the positive side, Ajinkya Rahane and Parthiv Patel’s impressive performances in the limited-overs format provide some cheer. Despite the absence of key batsmen due to injuries, India’s current batting department hasn’t failed to post challenging totals in damp conditions. India’s total of 165 at Old Trafford in the T20 fixture was huge, considering previous T20 scores at that venue, but the English batsmen made short work of it, as Munaf Patel was the lone Indian bowler who put up a fight. Thereafter, India posted a daunting 187 for eight in the second One-Day International as the match was reduced to 23 overs a side after a delayed start due to rain, but the bowling department failed to contain the English batsmen yet again.

This tour has exposed India’s deficiency in the bowling department. In the absence of Zaheer Khan and Ishant Sharma, the Praveen Kumar-spearheaded Indian bowling attack lacks teeth. Vinay Kumar has been fairly expensive thus far and Ravichandran Ashwin isn’t up to the mark. Munaf can nag the opposition batsmen with his line and length, but tends to be inconsistent at times. RP Singh, who was rushed into the Indian team as a replacement during the final Test against England without any match practice, appeared lackluster; if picked, he will have to bowl out of his skin to script a turnaround for himself and the team in this series.

If India takes the bold decision of playing five bowlers and six batsmen, the inclusion of Varun Aaron could prove to be handy. In fact, Aaron should be a part of the bowling unit even if India plays only four frontline bowlers, as his inclusion will add a bit of variety to the bowling attack. Bowlers like Praveen and Vinay predominantly depend on seam and swing rather than raw pace and struggle when conditions don’t favor them. Munaf’s primary focus is on maintaining a decent line and length. However, none of them, apart from Aaron, possess the tendency to consistently bowl above the 140 kmph mark.

Considering the fact that Zaheer can’t spearhead India’s bowling attack for long, it’s time for young fast bowlers to be groomed, and Aaron looks the most promising. Also, Ishant will undergo surgery on his injured ankle after the tour of Australia, and it could take six-eight months for him to completely recover thereafter. Keeping all this in mind, the selectors will have to look to the future and take necessary steps to avoid debacles such as the series against England. If Aaron is picked on a regular basis hereupon, he will get the much-needed exposure and confidence to be a force to reckon with in the coming years.

Bowling quick often helps and Aaron certainly has the raw pace to trouble batsmen. India’s current fast-bowling unit comprises of bowlers who bowl gentle medium-pace with a hint of movement, and hence it doesn’t take long for batsmen to get accustomed to it, as there isn’t much variety. Aaron’s pace can be testing, as the batsmen will have little time to react to his deliveries, and this increases the chances of him picking up wickets. He was India’s most successful bowler at the Emerging Players Tournament in Australia recently, picking 10 wickets in three matches with a best of 4 for 40.

India has three ODI matches left in this series and will host England for another T20 and five One-Day Internationals in October. Youngsters like Aaron must be given meaningful opportunities to prove their worth in the ODIs ahead.

(If cricket is a religion and has many devotees, Karthik Parimal would be a primary worshipper. This 23 year old graduate student, pursuing his Masters in Engineering, could be an appropriate example of how the layers of what inspires, motivates and keeps one happy run deeply in our daily lives. He, unlike others, is not too disappointed about not making it big by playing for the country, but believes that he plays the sport every day with his heart by watching and writing on it).