Varun Aaron: Memories of a teammate

Varun Aaron: Memories of a teammate

Varun was a lot like the West Indian greats of the yesteryears.

With Varun Aaron creating a huge impact Down Under in the ongoing Tests series against Australia, the wonderlid from Jamshedpur has grabbed eyeballs ever since he made his international debut and has terrorised most of the batsmen with his pace in any condition. Heading from one off the well known places in Jharkhand, Abhishek Ganguly gives an insight look and shares his experience with the young man.

It is evident that Jamshedpur’s favourite son Varun Aaron is a  true Loyolan to the core. His only dream was to bowl quick, quick and more quick. Varun Aaron is one of those names who have proved that India can also produce genuine fast bowlers. Ask him, and he will say that bowling quick excites him.

Those days are still vivid in my memory. Mr KVP Rao, our coach, used to hand over the brand new cherry to Varun during our daily net sessions at the JRD Tata Sports Complex. Batsman and wicketkeepers were scared of him in those days.

Aaron came from an affluent family, which surprised us: it was not a common sight to see someone of his background attending every net session even during the scorching heat of May and June. His father, who took keen interest in his child’s progress, used to drop him regularly at the ground. We also saw Varun’s grandfather come to the ground to watch Varun bowl.

Varun was a lot like the West Indian greats of the yesteryears. He ran in and bowled it as fast as he could. He tried to emulate Andy Roberts.

Keenan Stadium, where we used to practice, was once considered the fastest Indian wicket. Just imagine Varun bowling on it! I had never skipped my nets before Varun had started taking new ball but I was a notable absentee once he did!

He was promising from his early days. Mr Rao, his first coach, praised him: “He [Aaron] had all the attributes to become one of the greatest fast bowlers India has ever produced. His run-up was bit of a concern but he was quite aware of it and was regular to practice. His strength was his brain which he used pretty wisely when bowling. He could easily measure the weakness of the batsman and never used to bowl to his strengths. I wish him all the success he truly deserves”.

Varun was really penetrative. We all knew that he loved bowling fast, right above the off-stump, maintaining a tight line and length. He also loved hurling bouncers and was an asset to any team.

His teammates was in awe of his presence. I remember my Under-17 state team’s coach once tempting him before he took the field just to fire him up a little. Boy! Wasn’t he fired up. He bowled the fiercest spell I have seen! He bowled quick and took a five-for.

Since then every coach used the same technique of firing him up just before he took the field. The 12th man was always on his toes whenever Varun took field. Varun loved having chocolates while bowling; they gave him the extra energy.

He quickly graduated to the next level and within a year or so he was selected for the Ranji trophy team. Prior to that he was a regular to the MRF Pace Academy where his selection was strictly based on his ability to bowl fast during his Under-15 and Under-17 days. He was quickly spotted their as a promising talent and they wanted to nurture him.

His new-ball partner Rahul Shukla — who played for three Indian Premier League (IPL) teams — said: “Varun’s real transformation as a bowler happened when he was selected for the MRF Pace Academy. His interest to play for India grew and he took great care of his body. His physical fitness was at its peak and he put in a lot of effort to achieve it. Sharing the new ball with him is always a pleasure.”

A lesser-known aspect of Varun is his ability to hit the ball to a great distance. He was a fairly good batsman and had good batting sense. He took his batting quiet seriously and was a tremendous hitter of the ball. In all probability he does not have time to devote to his batting these days.

His quickest delivery came against Vidarbha in a limited-overs match. This single delivery got him in the reckoning for a berth in the national side as India was lacking a genuine fast bowler. MS Dhoni always wanted somebody around his armoury who could hit the bat hard and forced the batsman onto his backfoot.

Varun fitted the cause and was soon drafted into the national side. He had to battle a lot of injuries and two stress fractures on his back almost ruined his career. However, his zeal and passion for the sport made him return to bowling quick again after he put in hours of physical fitness and core strengthening at the National Cricket Academy (NCA).

Those were probably the most tasking days of his career, but he was so adamant and obsessed about making a comeback to the field that he cycled and came for his morning gym sessions in spite of having a fleet of cars at his disposal. His is one of most  remarkable comebacks one has seen or heard about.

“Varun was probably destined to play for India but his sheer love and the amount of dedication he showed towards the game along with the years of tiring practice sessions made him play for India quicker than he anticipated,” said his grandfather.

As for me, I am quiet privileged to have shared the dressing-room with him during my Under-15 and Under-17 days. His absence due to national duty is felt in the Jharkhand Ranji trophy team. Jharkhand is still in pursuit of producing a cricketer as promising since his arrival on the scenario.

(Abhishek Ganguly is a former Jharkhand cricketer who started his career with Varun Aaron and Saurabh Tiwary. He has played for Jharkhand Under-15s, Under-16s, and Under-17s) 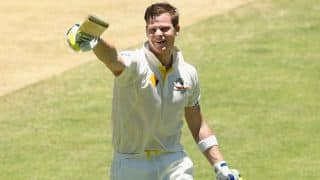