The last pair of Hyderabad — Ashish Reddy and Ravi Kiran — shared a partnership of 128.

The match between Hyderabad and Kerala in the Vijay Hazare Trophy produced a record tenth wicket partnership in List A cricket. The last pair of Hyderabad — Ashish Reddy and Ravi Kiran — shared a partnership of 128. They broke the long standing record of unbeaten 106 runs set by Viv Richards and Michael Holding in an ODI against England on May 31, 1984 at Old Trafford.

Hyderabad were chasing 322 against Kerala. Wickets kept falling and they were reduced to 60 for nine in the 24th over. Then the No. 11 batsman Ravi Kiran stood along with No.7 Reddy. Reddy dominated the partnership with Ravi Kiran holding one end up. Reddy brought up his fifty and then his hundred; they put on a century partnership and went on to break the 30-year old record between Richards and Holding. The pair finally stopped in the 44th over when Ravi Kiran was stumped for 27 runs off 60 balls. They added 128 runs for the last wicket. Reddy remained unbeaten on 119 off 107 balls with nine fours and eight sixes.

Richards and Holding had begun their partnership when the team’s score was 166 for nine. Richards had showed his class and smashed the bowlers. They remained unbeaten till the end and took team’s total to 272 for nine. Their record remained untouched for 30 years!

As the record for the last wicket has been broke, let us see the highest partnership for each wicket in List-A cricket.

Highest partnership for each wicket in List-A cricket

Only one from the above had taken place in an ODIs —the 331-run stand between Sachin Tendulkar and Rahul Dravid. Morne van Wyk and Cameron Delport recently broke the record of Tendulkar and Dravid for the highest List A partnerships for any wicket.

Let us also check the highest partnerships for each wicket in ODIs.

Highest partnership for each wicket in ODIs KL Rahul could well have been KL Rohan! 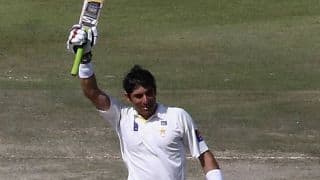