The Bangalore business tycoon has sensed that his franchisee would be shorn of the imported glamour in the form of dancing girls if they are subjected to the kind of slavery that they have been in recent times.

Vijay Mallya is a worried man.  Not merely on the corporate front but also as the owner of the Royal Challengers Bangalore (RCB). Though RCB has moved up to occupy the third spot in the Indian Premier League points table, Mallya’s latest worry is from the ground, but just beyond the boundary.

Little did the cheerleaders anticipate when signing the contract that they would hardly be able to get down from the ramp and rest their tired legs. “Forget dancing, even keeping the plastic smiles on our faces is a huge effort,” said one of the RCB cheerleaders while soaking her leg in a bucket of warm water after the RCB-KXIP game.

CricLife has learnt that the RCB cheerleaders would much rather work for KXIP, who are paid the same amount and for much lesser work, thanks to KXIP! A Kings XI Punjab recruiting official, who didn’t wish to be named, told the reporter, “We have received several applications from RCB cheerleaders. First we thought they got attracted by our sponsors — Manforce. I mean, don’t get me wrong here. People tend to think Man Force as HR firm too and I thought they got attracted by that, but that wasn’t the case. They were terribly stressed out working as RCB cheerleader and wanted life.”

A RCB official confirmed the same and said:  “We take pride in having the hottest of cheerleaders and are trying to keep them happy. We take pride in our glam. Glamour is something we never compromise on and as a result, we have called reinforcements from all around the world and even approached the F1 grid girls to work as back-up. We would also have some of the present cheerleaders as Kingfisher Calendar girls. That’s huge. So we are hopeful. ”

Maria, an exhausted cheerleader of Slovakian origin, who was on duty in Bangalore on Wednesday, told the writer, “Two boundaries an over at an average sounds still ok. But this isn’t fair when you someone is hitting 20-25 off an over. Imagine our workload! Last night, our girls had to virtually dance non-stop for three and half hours as 226 was scored and then the bowlers got 10 wickets!” 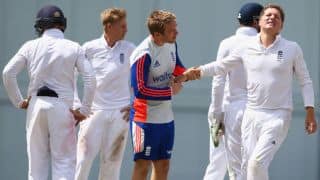