Vijay Mehra: A teenager drafted too early into Test cricket

Vijay Mehra: A teenager drafted too early into Test cricket

At 17 years 265 days, Vijay Mehra was, at one time, India s youngest debutant by a distance.

Vijay Mehra was born March 12, 1938. Abhishek Mukherjee looks at a teenage prodigy who was probably drafted in too early at the highest level.

Not everyone is a Sachin Tendulkar. Australians had got things wrong with Ian Craig an error they later rectified by making Michael Hussey and Adam Gilchrist a proper grinding at First-Class level before exposing them to the top level. They went onto become big names in the world of cricket.

Barring Tendulkar and Harbhajan Singh, none of the other Indian Test cricketers below 18 Laxman Sivaramakrishnan, Maninder Singh, Parthiv Patel, Piyush Chawla, have managed to make it big. Vijay Laxman Mehra a serious letdown of the name that had been lit up by the august presence of Merchant, Hazare, and Manjrekar (and years later, Murali) was one of them.

Despite his doggedness, Mehra clearly had his limitations, which were exposed at international level. Bishan Singh Bedi once told Rediff in an interview: As a player he was limited in talent but excelled within those limitations. He had probably been exposed at the top level too early.

Born with a small frame and aided by solid technique, Mehra went on to play 8 Tests, scoring 329 runs at 25.30 with 2 fifties. At First-Class level, he had scored 5,614 runs at 34.44 with 13 hundreds; his occasional bowling hardly used at Test level fetched him 26 wickets at 31 with a five-for.

Born in Amritsar, Mehra made his First-Class debut against the touring Commonwealth XI in his hometown at an age of 15: batting down the order against an attack that comprised of Peter Loader, Sam Loxton and Frank Worrell, Mehra scored 14 and 17*. He made his Ranji Trophy debut next month against Services and scored 54 and later he top-scored with 96 against Holkar.

Mehra had an overall good season, scoring 230 at 57.50. He played a solitary match next season against Services. The season after that had a surprise in store for him: with Lala Amarnath, then Chairman of Selectors, opting for a youth policy, Mehra was pulled out of nowhere to make his Test debut against New Zealand. At this stage, Mehra had played 5 First-Class matches, had scored 246 runs and had averaged 41 with 2 fifties.

The first Test of the series at Hyderabad had ended in a high-scoring draw with Polly Umrigar scoring 223 (the first double-hundred by an Indian), Vijay Manjrekar 118, and a debutant Kripal Singh 100 not out (Narain Swamy also made his debut); though Subhash Gupte ran through the Kiwis, getting them to follow-on, Bert Sutcliffe score a dazzling 137 not out and save the Test.

The next Test at Brabourne Stadium saw Mehra make his debut alongside Nari Contractor and Sadashiv Patil. At 17 years 265 days he was India s youngest debutant by a distance (Tendulkar currently holds the record at 16 years 205 days), going past Mushtaq Ali s erstwhile record of 19 years 19 days.

Mehra opened batting with Vinoo Mankad (who scored 223 to equal Umrigar s record for the highest Test score by an Indian) and added 36 for the first wicket before Johnny Hayes had him caught by Zinzan Harris for 10. Gupte then picked up 8 wickets and India won by an innings.

The third Test at Kotla saw two more debutants in Bapu Nadkarni and Gundibail Sunderam, but Mehra was given another chance on his home turf. New Zealand declared at 450 for 2 (Sutcliffe scored 230 and John Reid 119, both not out) before Mehra came out to open with Contractor.

This time he was not going to be a pushover: both batsmen put their heads down and saw off the opening overs from Tony MacGibbon and Harry Cave; Cave took MacGibbon and himself and got Hayes and Reid on; the score reached 50, and Mehra was eventually caught-behind off Hayes for 36. The openers had added 68.

Umrigar declared with an 81-run lead before the match petered out to a draw, with Mehra sending down 3 overs as the ninth bowler. He was dropped for the next two Tests at Eden Gardens (where Chandu Patankar made his debut and New Zealand almost lost despite a 204-run lead) and at Chepauk (where Pankaj Roy and Mankad added 413), Mankad went past Umrigar s and his record to score 231, and Gupte spun out New Zealand to help his side to an innings victory.

The axing came as a setback to Mehra. He averaged 12.33 next season and never reached 40; pitted against the touring West Indians, Mehra found Wes Hall and Roy Gilchrist too hot to handle: he was caught-behind off Hall for 4 and 0 as Indian Universities were routed for 49 and 167.

It took Mehra seven domestic seasons to come up with his maiden First-Class ton. By that time he had moved to a very strong Railways side; he lost Contractor early in the match against Jammu and Kashmir but added 283 with Budhi Kunderan for the second wicket before falling for 132. Railways won by an innings. Despite his long career till then, he was still a shade below 22.

Mehra toured Pakistani for Indian Starlets in 1959-60 and scored 161 against Pakistan Eaglets (he also picked up 2 for 0 in the match). With 334 runs at 37.11, he finished the tour next to only Milkha Singh and ML Jaisimha. On his return he followed his 161 with 107* and 9* against Jammu and Kashmir; 37 and 60 against Northern Punjab; 58 and 115 not out against Services and 75 against Delhi; and was selected for the Board President s XI, 133 against the touring Pakistanis.

With 755 runs from 9 innings at 125.83 and 4 hundreds, Mehra was suddenly back in the reckoning for a Test spot. Once again he ran into a purple patch, scoring 130 against Railways, and when picked for North Zone against the touring MCC, he scored 56 and 53, following it with 117 against Southern Punjab.

The amazing run earned him a place in the fourth Test against England at Eden Gardens. All three Tests had been drawn, and England drew first blood by removing Contractor and then Manjrekar, but Mehra hung on. He was hit on the left glove, but did not flinch. He knew that his job was to help build up a total as big as possible, and he battled out against the relentless Englishmen.

His 224-minute vigil eventually came to an end when he hit Tony Lock to Peter Parfitt for 62. It would remain his highest Test score. With the middle-order living up to their potential (nine batsmen reached double-figures) India managed 380 before Salim Durani and Chandu Borde bowled England out for 212.

Unfortunately for Mehra, the blow in the first innings had turned out to be a fractured left thumb. Jaisimha opened with Contractor, but Mehra eventually arrived at the fall of the ninth wicket to provide Borde with company: he hung on gamely for 34 minutes, scoring an unbeaten 7 as India added 19 for the last wicket. Chasing 421 England were bowled out for 233.

Mehra s injury kept him out of the last Test at Chepauk that India won to claim the series, but he made it to the abysmal tour of West Indies that followed. Not only were India blackwashed 0-5, they also lost each Test by a comprehensive margin. Mehra had a terrible start to the tour, scoring 0 and 8 at Queen s Park Oval where India lost by 10 wickets.

He was dropped for the next two Tests but was brought back for the fourth, also at Queen s Park Oval: it seemed to be an encore as West Indies amassed 444 for 9, and a demoralised India, now led by Mansur Ali Khan Pataudi, were reduced to 30 for 5. Opening batting Mehra (14) was the fifth batsman to fall, and though Umrigar and Pataudi fought back India were bowled out for 197.

Charlie Stayers removed Jaisimha early in the second innings, but Mehra and Durani were determined not to give up. They blunted out Hall, Stayers, Lance Gibbs and Garry Sobers; and added 144 for the second wicket before Mehra was bowled by Hall for 62, equalling his career-best. Durani scored 104, Umrigar followed his five for 107 with 172, but West Indies won comfortably by 7 wickets.

The last Test at Sabina Park was also a rout where West Indies won by a comfortable 123 runs. West Indies scored 253, India were reduced to 40 for 6 (Mehra was caught behind off Lester King for 8) and were set a target of 359; once again Mehra had a decent second outing, scoring 39 before Sobers had him caught-behind for 39. Despite not having a great outing, he was named an Indian Cricket Cricketer of the Year, mostly for his domestic performance.

India did not play another Test for close to two years, but when they did, Mehra was back for the Chepauk Test against England. Perhaps shell-shocked at the sight of a rampant Kunderan at the other end, Mehra was caught-behind off Fred Titmus for a 100-minute 17; Kunderan, meanwhile, had taken India s score to 85.

India led by 140 and once again Mehra and Kunderan did well, adding 59. Mehra was eventually run out for 26, Pataudi set England a target of 293, and England responded with 241 for 5.

Mehra was retained for the second Test at Brabourne Stadium, where he scored 9 and 35, being trapped leg-before by John Price and Titmus. The Test went on the same lines as the first Test: India took a 67-run lead and chasing 317 England finished on 206 for 3. Mehra never played a Test again.

By then Mehra had moved to Delhi. Earlier that season Mehra had scored 58 and a career-best 167 not out against Services. He continued with the good job that season, scoring 893 runs at 42.52 in the season. That season he also surprised everyone by routing Railways with a career-best 5 for 23.

However, he was never the same batsman again, and never went past the 40-mark in a season till retirement. He quit after Delhi were beaten by Bombay in the 1970-71 Ranji Trophy quarter-final (he top-scored with 52 in the first innings but fell for a duck in the second). He was not even 33.

After hanging up his boots, Mehra acted as a National Selector from 1975 to 1982 and played a crucial in Delhi Cricket during the late 1970s and early 1980s a phase in Indian cricket that Mihir Bose had referred to as The Rise of the North . He had also earned a reputation as commentator for All India Radio and Doordarshan for what Bedi had referred to as a tremendous sense of humour .

Mehra was married to Kusum, later a Professor at Lady Sriram College. His son Ajay, also a fine batsman, played for Punjab and Rajasthan but could never make it to the top level. He finished with a batting average of 34.61, eerily similar to his father s 34.44. He also runs the Vijay Mehra Cricket Academy near Kalkaji. 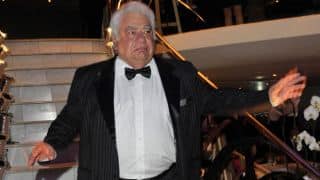