Virender Sehwag and Gautam Gambhir, a partnership that flourished for years, finds itself at the crossroads. 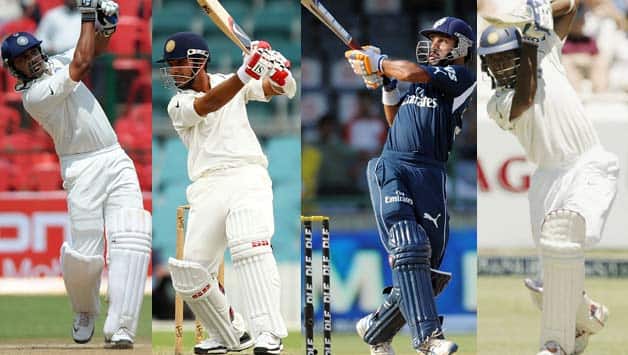 Virender Sehwag and Gautam Gambhir, a partnership that flourished for years, finds itself at the crossroads. A prolonged period of inconsistency has resulted in a shaky hold over their spots at the top of the order in the Indian Test line-up. While they did perform in patches during the Test series against England, it was no match to their previously set high standards. As the selectors sit to pick the Indian Test squad for the series against Australia, the Delhi duo will feel the heat, keeping in perspective the happenings in the ongoing Irani Trophy game.

Murali Vijay, Shikhar Dhawan, Wasim Jaffer and Ajinkya Rahane, all openers by trade, have been amongst the runs in the ongoing Irani Trophy game between Mumbai and the Rest of India. What this does is that it gives the selectors more options ahead of Sunday’s crucial meeting to pick the side. Sehwag and Gambhir should hold on to their spots, but the selectors might pick two back-up openers – similar to their move during the series against England. If the five wise men decide to pick two extra openers, it would certainly put pressure on the Delhi duo to perform and they cannot take it easy.

Vijay hasn’t had a very good Ranji Trophy as he averaged on 17.25 in five appearances. He couldn’t play all the games as he was away on national duty during the series against England. However, in the Irani Trophy game at the start of the season he scored a mammoth 266. He has now followed that up with another century against a formidable Mumbai side. It was a dominating knock as he looked in good touch and was playing his strokes without fear.

In the past, Vijay has been an understudy to Sehwag and Gambhir. His opportunities have only come when the two preferred options have been injured or opted for a rest. Vijay’s problem has been lack of consistency. If he gets another opportunity, he has to capitalise on it as there are other candidates posing a strong challenge.

Dhawan had a good season as he scored two hundreds and averaged over 50. In the tournaments before the Ranji Trophy, he showed fantastic form and was awarded with a call-up to the India A side to face England. With Vijay scoring a hundred, he may have to bide his time as the Tamil Nadu opener seems to enjoy the confidence of the selectors. Another major factor in Vijay’s favour is that he has already played Test cricket – which might help pip Dhawan in the race.

Rahane has been one of the most unfortunate players in recent times as his One-Day International (ODI) appearances have been few and far in between and a Test cap has been elusive. The team management’s reluctance in axing the more established players has cost Rahane a number of opportunities and that would have certainly dented his confidence. Along with Vijay, he was the back-up opener in the England Test series. At the time of writing, he is unbeaten on 55 in the Irani Trophy and is looking good for more. A three figure mark would certainly be a huge statement.

The dark horse in this race is the veteran Jaffer. He continues to reign supreme in domestic cricket and gets better with each passing season. It has been almost five years since he last played for India and the selectors haven’t gone back to him since. However, his prolific run-making does inspire confidence and ultimately age shouldn’t be the primary consideration.

Form should be the sole criteria for selection – something that isn’t always true in Indian cricket. But, Sehwag and Gambhir’s struggles have been alarming and if they do not strike consistency in the series against Australia, the selectors may be compelled to take a few tough but necessary decisions.