Vincent ‘Vince’ Barnes: The man with the outstanding bowling average of 11.95

Vincent ‘Vince’ Barnes: The man with the outstanding bowling average of 11.95

While Sydney Barnes strides the pitches of the landscape of cricket history like a colossus, Vince Barnes also has definite claims to greatness. Unfortunately, most of his glorious feats were performed off the global stage.

Vincent Vince Barnes, born February 15, 1960, is known to the world someone who was for a long time the assistant coach of South Africa. However, few know that he was a demon bowler who finished his career with a bowling average of 11.95 for his 323 wickets. Arunabha Sengupta looks back at the life and career of the brilliant bowler who had to ply his trade away from the public eye.

Sundial in shade nay, in a dark room

Barnes, the greatest of bowlers!

There is nothing surprising about the phrase, at least to the ones who dabble in the hoary past of the game. There has seldom been a greater bowler than Sydney Barnes. And very few such colourful and controversial characters. 189 Test wickets at 16.43, a record 49 scalps in a series although he dropped out of the fifth and final Test because the authorities would not pay for the accommodation of his wife.

Well, yes. But this piece is about another Barnes.

Strangely, the sobriquet at the beginning of the article does justice to him as well. Even more strangely, this Barnes is perhaps a recognisable face to the modern cricket viewers. Only they don t know that he was such a demon bowler.

After all, Vince Barnes coached South Africa A and was for a long while the assistant coach of the rainbow nation s international side, the deputy to Mickey Arthur. The modern cricket followers recognise the tall, dark man with an amiable smile. However, few know of his near phenomenal bowling feats.

In his youth Barnes was a fast bowler, who ran in quickly and delivered with a slingy action. He was skiddy, brisk and could often be hostile. He could swing and seam both ways, and also bounce with terrifying effect. He skittled batsmen out almost at will, although, self-confessedly, he was helped along by underprepared wickets.

By the end of his career had 323 wickets at the incredible average of 11.95! In the history of First-Class cricket, no bowler playing in the twentieth century or later took more wickets at a better average.

Sadly, 304 of those wickets were captured in the gloomiest confines of the dark continent and had to wait years to be acknowledged as First-Class. When the political scenario changed and he free to get into the fray in front of the eyes of the world, time s arrow had cruelly caught up with him. He did not do too badly in the remaining couple of seasons. But by then he was some distance past his best.

Many supreme South African cricketers could not make their mark in Test cricket due to the 22 years of isolation. Graeme Pollock s phenomenal career was cut short. Barry Richards played only four Tests and is still grumpy about it. Mike Procter managed to play just 7. That left these magnificent men who, as per the name of the recent biography of Barry Richards, were like Sundials in the Shade .

For Barnes it was different. The world at least got to know about the structural majesty of those sundials even as they remained in shade. County cricket was graced with the presence of some, the Currie Cup gave rise to the tales of the Transvaal Mean Machine, the rebel tours were spectacles that found their ways to the front page through cricketing exploits and political debates.

But Barnes was a sundial locked up in a dark room, away from public view. He had to ply his extraordinary trade in the Howa Bowl organised by the South African Cricket Board of Control (SACBOC).

He had to wait years before the normally change-resistance Wisden finally set the record straight by acknowledging the Howa Bowl matches as First-Class. And with this touch of editorial magic, Barnes became one of the best bowlers in First Class cricket in terms of average.

It was the exceptional brilliance of Basil D Oliveira, along with enterprise and help from circumstances that had enabled one coloured cricketer to escape from the injustice of apartheid.

In 1959, a year after having led the non-white South Africans to a triumphant tour of East Africa and Kenya, D Oliveira penned a desperate letter to John Arlott. Written in green ink, it ran: Dear Mr Arlott, I daresay this is only a minor detail compared, I presume, to your other escapades, but I am sure that you would try your best and use your powerful assistance to help me

In 1960, when Wes Hall was unable to take up his position as the professional for Middleton in the Lancashire League, D Oliveira was offered a contract. He started on a journey that changed the landscape of cricket forever.

It was that same year that Barnes was born in Cape Town. And by the time he had started on his cricketing journey, the Springboks had refused to accept D Oliveira as a part of the touring MCC squad and had been banned from the sporting arena.

Barnes grew up in a segregated environment. The sporting arena was divided. The whites played within their structure, facilities, stadia. The non-whites had their own associations, their own tournaments. While Prime Minister Balthazar Johannes Vorster toyed with the idea of Black Olympics for the non-whites, cricket was governed by two separate organisations.

The Currie Cup was the traditional tournament for the Pollocks, Procters and Barlows. The non-whites, under the governance of SACBOC, tussled for what was variously known as Dadabhay Trophy, SFW Trophy or the Howa Bowl.

Played on underprepared wickets, the Howa Bowl was often a nightmarish experience for the batsmen. Indeed, Yacoob Omar of Natal, the man with the best batting average in the history of the tournament, managed 3,337 runs at 34.81 with 8 hundreds and 11 fifties in 58 matches. That was by far the best average among the batsmen who laboured to score runs in the tournament.

Yes, the pitches were incredibly difficult to bat on. The great Rohan Kanhai participated in the Howa Cup for one season, towards the fag end of his career in 1974-75, just before his grey head graced the World Cup in the following English summer. His run of scores 134, 188*, 104, 0 and 34 for Transvaal underlined his exceptional quality.

That 188 was to remain the highest ever score in a Howa Bowl match. When retrospective analysis was carried out after these matches were given First-Class status in 2005, the 360 runs pushed Kanhai from the 64th to the 63rd position in the all-time list of run-getters.

However, even while bowlers lorded it over the proceedings when Barnes ran in it did make quite a difference.

After a quiet debut for Western Province as an 18-year-old in 1978-79, Barnes started making the batsmen jump from the early days of 1980. His 6 for 32 against Transvaal was a sign of things to come. With every season his menace grew.

The following year, he was even more devastating against Natal at Ladysmith. Bowling with an 11-run lead, he sprinted in to capture 9 for 46 to engineer at 4-wicket win.

He scalped more than 40 wickets in three consecutive seasons starting 1985-86. He played this season for Transvaal and captured 12 wickets in the match when he met his old Western Province side. He captured 40 plus again, in both 1986-87 and 1987-88. Given there were 5 to 7 matches each season, it was sensational.

However, in the post-apartheid era, Barnes downplayed his feats: Most of the wickets we played on were underprepared. For me, as a bowler, it was great. But, for the batsmen, it was always a struggle. We never played at a set provincial venue where a groundsman could work on the wickets.

Whatever be the condition of the wickets, it took some doing. He continued to plough through the opposition in the subsequent years. When the best non-white cricketers of the land met for a showdown in 1987, Barnes bowled for South African Cricket Board XI against the South African Cricket Board President s XI. In a characteristically low scoring match he ensured a 28-run first innings lead with 6 for 33. And when the opposition batted a second time to chase down 108, Barnes blew them away for 50 with 7 for 23.

The final Howa Cup tournament was held in 1990-91. Things changed after that with the complete abolition of apartheid, the release of Nelson Mandela and the formation of the United Cricket Board (UCB). The racial divide in South African cricket ended and the country was re-admitted into the international fold.

Barnes ended his Howa Cup days with 304 wickets at 11.12, the most wickets by far, leaving leg-spinner Seraj Gabriels behind with his kitty of 254.

By then he was past his best. The following season he turned out for Western Province B and did fairly well on the better tracks.

The high point was, however, when Yorkshire came down to play Western Province in Newlands. Barnes played alongside future Test stars Gary Kirsten and Craig Matthews. He again remained unconquered in both innings, for 8 and 1. That was no mean feat, with the Yorkshire attack boasting a young Darren Gough.

The visitors needed 309 to win when they started their second innings, and Barnes dismissed Simon Kellett and David Byas in quick succession to reduce them to 2 for next to nothing and thereby laid the foundation for victory.

He ended with figures that, in retrospect, after the accreditation of the Howa Bowl matches, read 323 wickets at 11.95. The average ranks No 20 among all bowlers who have captured 100 or more wickets in First-Class cricket. If we filter out the old pre-twentieth century days, it is second after Stephen Draai s 212 wickets at 11.82.

Yes, Draai also played in the Howa Cup. It is therefore difficult to place them in the same table for comparing with other First-Class cricketers. But, to take wickets at that rate would have taken something special. Eye-witnesses do admit that Barnes was a deadly bowler, with plenty of skills to supplement his pace.

And Saait Maiget, the fantastic all-rounder of Primrose and Western Province, was once struck on the mouth by a vicious Barnes bouncer. He could be intimidating too.

In short, the phrase Barnes the great bowler is actually not that self-explanatory.

While Sydney Barnes strides the pitches of the landscape of cricket history like a colossus, Vince Barnes also has definite claims to greatness. Unfortunately, most of his glorious feats were performed off the global stage.

(Arunabha Sengupta is a cricket historian and Chief Cricket Writer at CricketCountry. He writes about the history of cricket, with occasional statistical pieces and reflections on the modern game. He is also the author of four novels, the most recent being Sherlock Holmes and the Birth of The Ashes. He tweets at @senantix) 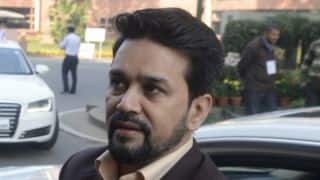