Vinod Kambli, born on January 18, 1972, is the famous talent that got away. Having started off as a precociously talented school cricketer in Mumbai, Kambli failed to live up to the expectations in 17 Tests and 104 One-Day Internationals (ODIs). Nishad Pai Vaidya picks 16 facts one should know about Kambli.

Kambli was born in a poor family that lived in a chawl in Kanjurmarg, one of the suburbs of Mumbai. His father, Ganpat, was a mechanic and had a tough time taking care of seven people in the family. As a young boy, Kambli had to travel with his kit in crowded local trains from Kanjurmarg to Shivaji Park for practice. Kambli s father was also a cricket player in Mumbai s club circuit and honed his skill as a fast bowler.

The 664-run stand in school cricket between Kambli and Sachin Tendulkar made headlines around the world. Till a few years ago, it was the biggest partnership in any form of cricket anywhere in the world. However, not many know that Kambli also starred with the ball in that match. After Sharadashram piled 748 for two, with Kambli scoring 349 not out, he went on to inflict more misery with a spell of six for 37 that blew away St Xavier s School for 154.

3. Plays for India under-19 while Tendulkar makes his Test debut

Fate always intertwined Kambli and Tendulkar together when they were precociously talented kids. While Tendulkar made his Ranji Trophy debut against Gujarat in 1988, Kambli had to wait another year to make his debut against the same opposition. In December 1989, when Tendulkar was in Pakistan playing the fearsome Pakistan attack, Kambli was picked for the India under-19 team to play the Asia Youth Cup. Sourav Ganguly, Ranjib Biswal, Ajay Jadeja, Dhruv Pandove, and Aashish Kapoor were some of his teammates.

Kambli is in the elite league of batsmen to have begun their First-Class careers with a six when he made his debut against Gujarat in 1989. That is Kambli for you a maverick.

In February-March 1993, Kambli walked into history when he smashed back-to-back double centuries in Test cricket. He first smashed 224 against England at his home ground Wankhede Stadium. He then followed it up with an innings of 227 against Zimbabwe in Delhi.

After those back-to-back doubles, Kambli scored a century in his next innings against Sri Lanka. He scored 125 against Sri Lanka in Colombo n July 1993. He thus has tons in three consecutive Test innings. The interesting thing is that they have come against different countries.

Having scored all those tons early in his Test career, Kambli took only 14 innings to get to 1,000 runs. He remains the fastest Indian to reach the milestone. Overall, he is only behind Herbert Sutcliffe, Everton Weekes, Sir Don Bradman and Neil Harvey (who also took 14 innings, but only nine Tests when compared to Kambli s 12).

Kambli s Test average is better than Tendulkar, Sunil Gavaskar, Rahul Dravid and Virender Sehwag to name a few. In fact, for Indian batsmen who have batted in 20 Test innings or more, Kambli leads the list with 54.20.

Records show that Kambli struggled in second innings in Tests. While his first innings average is an amazing 69.13, the corresponding number for the second essay is a paltry 9.40. With his Test career ending after 17 matches, he never got a chance to improve on that.

On January 18, 1993, Kambli achieved the unique feat of scoring an One-Day International (ODI) ton on his birthday. He scored an unbeaten 100 against England at Jaipur. Tendulkar and Ross Taylor are some of the other batsmen to have had a similar satisfaction on their birthdays.

In 1996, India endured an embarrassing exit from the World Cup. In the midst of the dramatic scenes during the semi-final at Kolkata, Kambli walked back to the dressing room in tears. He was soon discarded from the team. From March 1996 to October 2000, when he played his last ODI, Kambli featured in only 35 matches and averaged 19.31. In many ways, that semi-final was the beginning of the decline.

Given his flamboyant personality, Kambli made it into Bollywood and has featured in a couple of movies. In 2002, he was a part of the Suneil Shetty starrer Anarth. Then in 2009, he featured alongside Ajay Jadeja in the movie Pal Pal Dil Ke Saath.

Kambli last played international cricket in October 2000. His last domestic game was in November 2004. However, it was in 2009 that he called it a day from international cricket. Then, two years later, in 2011, he announced his retirement domestic cricket. It s another matter that the respective teams had moved a long time ago without him.

In 2009, Kambli stood for the Maharashtra Assembly Elections. He was representing the Lok Bharati Party from the Vikhroli constituency in Mumbai. However, he lost the elections by a huge margin.

Kambli has had a history of emotional outbursts on national television. In 2009, he appeared on the show Sach Ka Saamna, where he replied in the affirmative when asked if Tendulkar could have helped him more when it was most needed. Then, in 2011, he broke down during a television show and claimed that he had his suspicions about India s loss in the semi-final against Sri Lanka in the 1996 World Cup.

Kambli is married to Andrea, and he converted to Christianity a few years ago. His son is named Jesus Christiano Kambli. Andrea is his second wife. 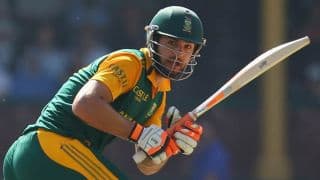