In the Indian Ocean, there is INS Viraat - India s Naval pride. It s the flagship of the Indian Navy, one of the two aircraft carriers of the country. 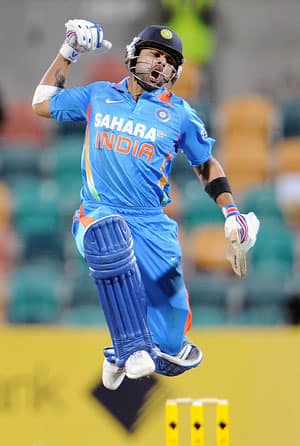 Virat Kohli exults after scoring his 9th ODI hundred at Hobart on Tuesday. That six of his nine ODI hundreds have come in run-chases shows his ability to thrive under pressure — a good indicator of a world class player © AFP

In the Indian Ocean, there is INS Viraat — India’s Naval pride. It’s the flagship of the Indian Navy, one of the two aircraft carriers of the country.

On land, there is another INS Virat: India’s Newest Sensation, Virat Kohli! While “INS Viraat” can carry up to 30 aircrafts, “INS Virat” can carry the entire national cricket team on his callow shoulders as he has so effectively shown time and again on the ongoing tour of Australia.

The motto of “INS Viraat” is: Jayema Sam Yudhi Sprdhah. The Sanskrit translation into English of this passage from the Rig Veda means, “I completely defeat those who dare fight me”. That’s the commonality between “INS Viraat” and “INS Virat”.

In a side of ageing maestros, Virat Kohli offers India the flame hope that in him there is at least one potential world class player who is capable of taking the baton from the battle-worn ageing heroes.

Nobody doubted Kohli’s talent, but the lack consistency and conviction at the Test match level had subjected him under tremendous pressure. Kohli is an intense young man. And at times when intensity meets pressure, it has exploded in a fashion that did not meet and societal approval and, more critically, invited the censure of the International Cricket Council (ICC).

But when he got his head together and played the most important innings of his fledging career in the first innings at Perth, the importance of that knock was not lost on Indian cricket fans. What they saw was the first emphatic proof that his batting belonged to the highest class at the Test match level. That innings also answered a number of important questions:

a. That he is capable of getting big runs.

b. That he has the class to perform on overseas tracks.

c. That he has the ability to come good on a green carpet.

d. That he could emerge trumps against a menacing, four-pronged pace attack.

e. That despite his age and lack of experience he has it in him to guts it out in a crisis.

f. That the low morale of the team was not going to affect his composure.

g. That the axe over his head was a chance to prove his critics wrong.

Simply put, the odds were overwhelming stacked up against him. If he missed out on anything, it was a century that would have done him a world of good. But he missed out because he failed to get the support he needed at the other end and hence had to throw his bat around.

The watershed moment of his career came in the fourth and final Test in the city of Churches and Chappells amid the continuing saga of India’s plummeting fortunes. But as Kohli got nearer to the hundred mark he underwent a tsunami of emotions as yet again his team mates deserted him, first Ravichandran Ashwin and then Zaheer Khan. He played and missed, escaped run out narrowly before notching up a hundred that, in the years to come, will be looked upon as one of the significant moments in rebuilding the crumbling edifice of Indian cricket.

Kohli is the key in the restructuring, not just as a batsman but as the clear leader of men who first gave signs of his leadership by captaining the India to victory in the Under-19 World Cup in 2008.

The lateral movement – in the air and off the wicket – at disconcerting pace, and the steep bounce the Australia fast bowlers produced to hound, humiliate and pummel the Indian batsmen into submission unnerved the best. But as the more established pros at the other end were succumbing in innings after innings, Test after Test, Kohli showed why he was the next big hope for Indian cricket and the finest of the precocious batting talents in contemporary international cricket.

The magnum opus at Hobart

India came to Hobart, fighting to stay alive in the CB series, which was as disastrous for them as the Test series that preceded the one-day series. The Sri Lankan innings was a continuation of India’s miseries which left them with a target of 321. But achieving the target in 50 overs was not going to help India if they had to stay alive in the championship; they had to do it in 40 overs! But thanks to Kohli’s brilliance, not only Lasith Malinga was taken to the cleaners, but the target was achieved in 36.3 overs! A shell-shocked Malinga was left wondering, “Why this Koli-veri…!”

That six of his nine ODI hundreds have come in run-chases shows his ability to thrive under pressure – a good indicator of a world class player.

Let’s reflect for a moment on South Africa Riplesque run-chase at the Wanderers in March 2006 when they surpassed Australia’s total of 434 for four in 50 overs with one ball and one wicket to spare! In the course of this chase, South Africa were 321 at the end of the 36th over — India took three more balls to get there against Sri Lanka on Tuesday! That sums up the epic nature of the Hobart ODI.

The captain in waiting

With Dhoni indicating that he could exit the Test match stage next year, Kohli’s innings would have given the selectors the confidence to elevate him as the captain-in-waiting. A gestation period as vice-captain for about one year will do him immense good. Kohli has been seen as a future India captain since he led India juniors to victory in the world youth cup. His maturity and intelligence has been there for all to see, if anything he needs have a grip on his anger. A chat in this regard with the likes of Sachin Tendulkar and Rahul Dravid — two men who have conducted themselves with utmost dignity on and off the field in their long careers — would be a quick learning exercise for the young man.

One thing is for sure: Under Kohli’s leadership, India will be led by a fiery young man who is more of a Sourav Ganguly than the monk-like Mahendra Singh Dhoni.

As Kohli’s innings fills the air with fragrance amid the emanating stench from the rot of India’s tour of Australia, one is reminded of Harold Wilson’s famous lines: “He who rejects change is the architect of decay. The only human institution which rejects progress is the cemetery.”