Kohli and de Villiers became the fastest to 6,000 and 7,000 ODI runs respectively.

Within a week of each other, Virat Kohli became the fastest batsman to reach 6000 One-Day International (ODI) runs, while AB de Villiers broke Sourav Ganguly’s long-standing record to 7000 ODI runs. Shiamak Unwalla looks at the current record-holders of the fastest ODI 1000s.

1,000: Of all the batsmen to get to the 1,000-run mark in ODIs — and there have been a lot of them — most of the names are to be expected. Perhaps the one surprising name on the list is that of Quinton de Kock, but as the Indians can attest to, he is quite a talent.

There are two West Indians, two Englishmen, and a South African in the top five quickest men to get to the landmark. This should be noted for further reference.

2,000: Hashim Amla makes a roaring entry to the list, overthrowing Viv Richards — who falls to the fifth spot — in terms of fastest batsmen to 2,000 ODI runs. At No. 2 is another ‘debutant’, Zaheer Abbas.

3,000: Amla stays at No. 1, while Richards regains lost ground by coming in at the second spot, a good 12 innings clear of Amla. Gordon Greenidge too makes a comeback to the list, while Gary Kirsten and Virat Kohli appear for the first time.

Richards is the only batsmen to appear on all three lists so far, albeit at varying positions. Kohli will feature again later on.

4,000: Amla and Richards retain the top two spots, while Kohli advances to the No. 3 position. Greenidge stays in the list as well, while Brian Lara makes his entry.

As many as three West Indian batsmen find a place in the top five. The difference between the top two innings reduces as well. Note the absence of names like Sachin Tendulkar and Sourav Ganguly; that will change soon.

5,000: Amla is yet to cross the 5000-run barrier, but he will doubtlessly find a spot in the top five once he does. Till that time, Richards again reaches the top spot, tied with Kohli. The others remain familiar names, except for the inclusion of AB de Villiers.

Again, the team compositions remain the same as the previous margin: Three West Indians, one Indian, and a South African.

6,000: Kohli takes the top spot for the first time, as he goes past Richards for once. The list sees the induction of two new names: Sourav Ganguly and Matthew Hadyen, both left-handed openers who were sometimes overshadowed by their more illustrious partners [Tendulkar and Adam Gilchrist].

Oddly, Hayden is the first Australian to feature in the list of quickest 1000s. Two Indians make the list for the first time as well.

7,000: De Villiers reaches the top of the pile for the first time, while Ganguly moves up to the second position. Desmond Haynes and Jacques Kallis make up the ranks.

Note the perpetual presence of West Indian, South African, and Indian players on the list. Surprisingly, not a single Sri Lankan batsman features in any top five. Likewise, neither New Zealand nor England find representation on the list.

8,000: Ganguly reigns supreme in this list, 10 innings clear of his competitor and opening partner Tendulkar, who makes his first appearance. MS Dhoni and Saeed Anwar emerge for the first time as well.

For the first time, Indians outnumber West Indians on the list, while Anwar becomes only the second Pakistani after Abbas to reach the list.

Note the absence of any Kiwi, Sri Lankan and Englishmen so far. That stat will change soon enough, at least for Sri Lanka.

10,000: Since the 10,000-plus club is so elite, each player deserves to be named rather than just the five quickest men to reach the landmark. The likes of Rahul Dravid, Kumar Sangakkara, Inzamam-ul-Haq, Mahela Jayawardene, and Sanath Jayasuriya make appearances for the very first time.

The list includes three Indians, three Sri Lankans, and one Australian, South African, West Indian, and Pakistani each. Note: Tendulkar will remain at the top of the table for every list that follows.

11,000: By now the table is even smaller. Tendulkar remains at the top, while Ponting climbs up to No. 2 and Ganguly falls to the third position. However, there remain but two innings separating Ganguly from Ponting.

The list, so devoid of Sri Lankans till recently, finds three islanders in the list, the most by any nation. India follows with two entries while the rest have but one each.

12,000: Ganguly drops out of the running, as Ponting retains his position behind Tendulkar, albeit by 14 innings.

The three Sri Lankans remain to dominate proceedings. Curiously, there are 99 innings separating Jayawardene from Tendulkar — a gap that is truly quite shocking.

13,000: And then there were three; Tendulkar, Ponting, and Jayasuriya.

Note the difference between innings taken for each man: 20 between Tendulkar and Ponting, and 75 between Ponting and Jayasuriya!

What is outstanding about Tendulkar is his ability to sustain himself over such a long period. By the time Jayasuriya played his 416th innings, he got to 13,000 runs; Tendulkar was nearing 17,000 runs in the same time.

It might appear that Tendulkar’s records are unbreakable, but some players like Kohli, Amla, and de Villiers certainly seem like they will push the limits set by Tendulkar. And then of course there is the matter of a certain Rohit Sharma who churns out double centuries annually! 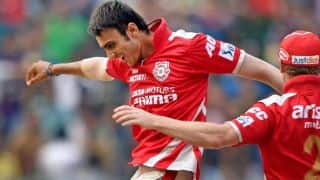