Royal Challengers Bangalore have turned around a corner after getting their best bats in top three.

Royal Challengers Bangalore (RCB) registered back-to-back victories against Mumbai Indians (MI) and Kings XI Punjab (KXIP), scoring in excess of 200 in both occasions. It was Chris Gayle, who stole the show against KXIP, and AB de Villiers showed his class and decimated the MI bowlers in the next game. Virat Kohli too played a crucial role in both the games. Pramod Ananth feels the form of these three batsmen is encouraging will be a major factor in RCB’s fortune in the tournament.

Looking back to how Bangalore started off in IPL 2015, despite their  victory in the first game, they did not have results going their way in the next three. Kohli kept fiddling around with the batting order, with Dinesh Karthik at No. 3 and Mandeep Singh at No. 4, which meant that de Villiers batted at No. 5. Although a destructive batsman like de Villiers did not need much time to get going, one felt that he could have played higher in the order. Chris Gayle: IPL great way for young players to kick-start their career

RCB team management took some time before zeroing in on Gayle, Kohli and de Villiers in the top order. Kohli and Gayle would always open, but de Villiers was never given the No. 3 spot. RCB even experimented by resting Gayle and giving South Africa batsman Rilee Rossouw a go. But it did not quite work out. RCB lost three games in a row after winning their first one.

However in Match 22 against Rajasthan Royals (RR) at Ahmedabad, we got to witness the three destructive batsmen occupying the top order and they made a target of 131 look meek as RCB sailed home by nine wickets with 23 balls to spare. This bating combination since then was was carried on for few more games, which played a key part in RCB’s rise IPL 2015. Mandeep Singh: Tried to keep it simple during innings against Kolkata Knight Riders

Kohli, de Villiers and Gayle are best utilised as high as possible in short formats, and playing them lower down the order is a waste. RCB’s recent success tells that. On more than one occasions, one among them has dropped the anchor and gone on to notch a big score, which has helped in either posting a huge score or while chasing.  Bangalore had an off day against Chennai Super Kings (CSK) when they lost the match from a winning position, but still Kohli made 48, opening the innings, which is what is required of him. Gayle was once again rested for the game in place of Nic Maddinson. It left many surprised but it was perhaps part of RCB’s rotation policy so that they test everyone out thoroughly.

Gayle, however, returned with vengeance in the next game as he smashed his fifth IPL ton against Kings XI Punjab (KXIP) and put on a 119-run stand for the opening wicket with Kohli. De Villiers did not let the momentum slip once Gayle got out for 117 as he remained unbeaten on a 24-ball 47. Chris Gayle, RCB pacers make mockery of KXIP as RCB win Match 40 of IPL 2015 by 138 runs

In their last match, it was de Villiers’ turn to rip apart MI’s bowling attack at the Wankhede. His unbeaten knock of 133 included 19 fours and four sixes. He put on 215 runs with Kohli with for the third wicket, which happens to be the record stand in T20 cricket. AB de Villiers dedicates ton against MI on Mothers Day to his mother, mother-in-law, and wife

Two of IPL’s weakest teams (Points-wise) Delhi Daredevils (DD) and KXIP are RCB’s last two opponents in IPL 2015. If RCB keep the same batting combination in these two games, they have a huge opportunity to cruise into the next round.  They have an excellent bowler in Mitchell Starc as well, who is more than a handful in the form that he is in currently. RCB must believe they can go all the way from here. KXIP vs RCB, IPL 2015 Match 50 at Mohali Preview 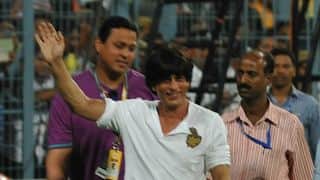