Chris Gayle’s thunderous heroics lit up the 2011 Indian Premier League (IPL) and inspired Royal Challengers Bangalore’s (RCB) run to the final. His dismissal for naught in the final was almost anti-climatic and the ultimate defeat highlighted his importance to the Bangalore setup. 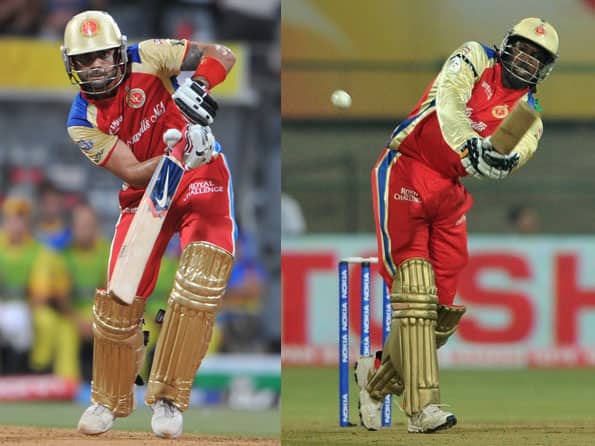 Chris Gayle’s thunderous heroics lit up the 2011 Indian Premier League (IPL) and inspired Royal Challengers Bangalore’s (RCB) run to the final. His dismissal for naught in the final was almost anti-climatic and the ultimate defeat highlighted his importance to the Bangalore setup. As the IPL 2012 approaches, Bangalore would be keen to prove that they are a force beyond Gayle and other stars in their line-up would want to put up their hands to contribute.

Gayle’s thunderous presence sends jitters down the opposition and strikes fear in the minds of the bowlers. Some of his knocks completely decimated the morale of the bowlers as they conceded runs at a haemorrhaging rate. Such was his form that it eclipsed the other sterling performances by his teammates. For example, Virat Kohli’s tournament figures of 557 runs in 16 matches went unnoticed in front of Gayle’s tally of 608 runs (12 matches) which came at a brilliant strike-rate of 183.13.

However, going through the stats of the RCB batsmen in IPL 2011, one would find that Kohli and Gayle are miles ahead of the others. AB de Villiers, Bangalore’s third highest run-scorer during the season, was more than 200 runs behind Kohli with 312. This highlights the fact that the top-order is the key and the middle hasn’t been tested a lot. The dominance of Gayle and Kohli upfront was enough to seal the deal on many occasions and it took the pressure off the middle.

The overall make-up of Bangalore’s batting is threatening. Apart from the three mentioned above, they have Tillakaratne Dilshan, Saurabh Tiwary, Cheteshwar Pujara, Mohammad Kaif and Luke Pomersbach to name a few. Dilshan’s opening partnership with Gayle is enough to give the bowlers nightmares. In fact, it is astonishing to see that Gayle’s brilliance makes Dilshan look slow. Tiwary is a hard hitter who has dazzled in the IPL.

Indian fans would be interested to see how Pujara and Kaif shape up. Pujara – rated by many pundits as the future of Indian cricket – is a technically correct batsman. One would hope the glamour of the IPL doesn’t spoil his game. Kaif, the forgotten man of India cricket, would be itching to relive past glory. However, Arun Karthik’s heroics during the CLT20 2011 may push either Pujara or Kaif out of the playing eleven. This move may also allow de Villiers to concentrate on his batting as the wicket-keeping duties would be taken up by Karthik.

Coming to the bowling, Bangalore have a strong pool of both foreign and Indian players. Daniel Vettori, the captain, is probably one of the best limited-overs bowlers in recent times and his accurate bowling can strangle the opposition. He may not pick too many wickets, but creates enough pressure for the others to capitalize. Dirk Nannes’ presence adds fantastic strength to the bowling and gives Bangalore a very effective new ball option.

Zaheer Khan would lead the pack, and although he can be a touch expensive in the shortest format, he still presents a threat up front. However, a 20-over long innings doesn’t allow him to hone his exceptional skills with the old ball. Sreenath Aravind and Abhimanyu Mithun are the Indian tyros who have a lot to gain from this exposure and sharing the dressing room with such international stars would do well for their development. In fact, Aravind was Bangalore’s surprise package last season as he topped their bowling charts. The acquisition of Vinay Kumar would further strengthen the Indian pool and his successful outing in the tri-series Down Under would hold him in good stead.

The biggest problem Bangalore would face is choosing their four foreign players. Vettori (captain) and Gayle are the certainties. However, the others such as Dilshan, de Villiers, Nannes and Muttiah Muralitharan would compete for the other two spots. It is tough to chose from these players as most of them can walk into any T20 side. By playing both Dilshan and de Villiers, Nannes wouldn’t make it and the fast bowling would be a bit weak. Zaheer would have to take the entire burden and lead a youngish Indian pace-bowling attack sans Nannes. Nevertheless, it is difficult to ignore Dilshan and de Villiers. Bangalore woudn’t have this worry in the initial stages as the Sri Lankan would be playing the Test match against England.

It is difficult to see Muralitharan getting a game as he isn’t the same bowler he was a few years ago. During the last season, he was benched for most games by the Kochi Tuskers Kerala to make way for other foreign recruits and add balance to the side. The fact that it came from a fellow Sri Lankan, Mahela Jayawardene (captain of Kochi) tells us a lot about Muralitharan’s waning abilities. The only way he can get a game is if Vettori is unavailable or rested for a game or two.

Bangalore have a strong fan base that turns up in numbers at home games. The Chinnaswamy Stadium turns into a sea of red with vociferous chants in support of the home team. This can be unnerving for the opposition and a huge morale boost to the hosts.

Bangalore are favourites to get through to the knock-outs along with Mumbai Indians and Chennai Super Kings. The only fly in the ointment is their supposed finals-jinx. They have lost three finals in the last three years- one in the CLT20 and two in the IPL. The new season heralds the possibility of change.

Clarke, Tamim, Levi, Russell, Broad & Narine among newbies to watch out in IPL5