Virat Kohli s men are emerging as the most formidable unit around the bat, forming an extension to the wonderful all-round bowling attack.

Ravichandran Ashwin runs in to bowl in that now-so-familiar rhythmic action. Ajinkya Rahane bends down from his waist, his hands close to the ground, ready to pounce at the slightest chance. The ball takes the inside edge, bounces off the pad and balloons to silly mid-off. There is no one there. Wriddhiman Saha, donning those big gloves and the familiar helmet, goes up in agony. Virat Kohli does not think they need a fielder over there. He needs his men elsewhere. His other specialists, Rohit Sharma, Cheteshwar Pujara, and himself, are at more strategic positions. An astute reader of the sport, Kohli knows which holes to plug. FULL CRICKET SCORECARD: India vs New Zealand, 2nd Test at Eden Gardens, Kolkata

Ravindra Jadeja comes on from the other end. The angle has changed, as has the pace. Kohli calls for Rahane. Rahane calls for his helmet. He moves from slip to silly mid-off. Jadeja strides in. Midway through the over Kohli decides they need another fielder over there, so he walks up, taking his place to the right of Rahane. There are two men now. Murali Vijay, the man who stands at first slip when seamers bowl, is now crouching to the right of Saha. Pujara and Rohit wait.

All this is hypothetical, imaginary but it could have been real as well. Not only is the new gang outstanding, they are also interchangeable most of them, that is. When four men prowl around the bat, Jadeja may be one of them; he may also be at cover, making batsmen sprint for what would have been an easy single otherwise or even decide against it.

Vijay, similarly, is first slip when Mohammed Shami runs in. He relinquishes the position to Rahane when pace turns to spin, but when the spinner needs a square-slip or gully or whatever they call it, he is summoned. When Vijay stands at first slip Rohit moves to second, pushing Rahane to gully. They are all-rounders in the zone.

Kohli takes those helmetless trips to stand under the nose of the batsman, making him think before blocking but also tempting him to drive one through cover.

Matt Henry tried the same at Kolkata. He thought the bareheaded Kohli would flinch to a full-blooded drive. Kohli did not, for his reflex action does not involve swaying away. His instincts made his right hand go up in the air and pluck the ball out of nowhere.

Luke Ronchi had edged one off Jadeja earlier in the day. The ball flew past Saha. Rahane was unsighted by his wicketkeeper. Most fielders would have been slower to react, but there is a reason Rahane holds the record for most catches in a Test. Standing low, he responded quicker than anyone in contemporary cricket; it was certainly not his fault that it had bounced early.

Such examples of Kohli s men stretching themselves beyond ordinary limits are aplenty. You can almost sense the energy level of the pack from the stands or from in front of television sets. They cheer, they yell, they appeal, they smirk, they grin, and they pull off spectacular catches.

At the helm of it all is Kohli, cheerleading the Eden Gardens crowd whenever they threaten to go quiet. And at the centre stands Saha, calm, composed, capable, and the perfect foil to Kohli s exuberance. The others join them in a formation that befits a champion unit.

It is not every day that you come across a Mohammad Azharuddin. In fact, India have never produced another Azhar. Some fielders are outstanding in the thirty-yard circle, throwing themselves on the ground to cut off those boundaries at backward-point or extra-cover, while some others pull off spectacular saves and jaw-dropping catches in the outfield.

Azhar could do both, and more: he could also pluck them out of thin air at slip, or anywhere around the bat. They do not make them like that anymore. Franchise-based T20 leagues have produced stunning outfielders by the dozen, but not as many champions close to the bat: they do not need to. The leagues have certainly made fielding richer but Test cricket comes with its unique demands.

Old-timers would talk about the excellent set of close-in fielders India had during the 1970s: Sunil Gavaskar, Ajit Wadekar, Srinivas Venkataraghavan, and Eknath Solkar prowled around the bat, ready to pounce at the slightest opportunity as Farokh Engineer formed the fulcrum of the pack.

Azhar dominated the 1990s before Rahul Dravid (following a short stint at bat-pad early in his career) and VVS Laxman replaced him at slip. At short-leg India had Aakash Chopra, almost certainly their finest in the 21st century, but that was for a while; then followed a lean phase.

They were all spectacular fielders, Ajay Jadeja and Robin Singh, Yuvraj Singh and Mohammad Kaif, Suresh Raina and Kohli, Jadeja and Rohit and Rahane. But these men were are limited-overs specialist fielders, almost all of them. They were peerless when it came to flinging themselves on the ground to stop boundaries, but slip fielding required specialised skills.

Kohli was tried at slip. It did not work out. Jadeja famously dropped Alastair Cook. Fans grew impatient. Social media trolls came to their vicious worst. They went after Kohli for he had an ordinary run with the bat and Jadeja, one of their favourite targets.

The team management had remained patient. There was little they could have done, for you do not pick the best close-in fielders and make a unit of champions out of them. The only way out was to pick your best men and train them at respective position. They backed the boys, for they were fresh, eager, and fit, and knew the importance of fielding.

The backs and arms took blows as they ducked. Those fingertips took their toll on those harsh winter mornings. One powerful blast after another crashed on to those shin-guards. And the standards with every passing day in those camps where they braved weather and hardship to emerge as a bunch of champions, for they knew that fielding of the highest level was just as crucial a part of being a top side as batting and bowling.

Slowly, with every passing day, Kohli s men are emerging as the most formidable unit around the bat, forming an extension to the wonderful all-round bowling attack. There are several reasons behind India s ascent of which this would feature very close to the top. 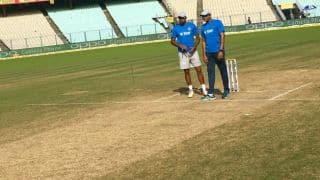 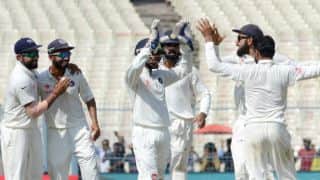 Ongoing New Zealand tour of India to be cancelled by BCCI?