It is difficult being Virat Kohli. He seldom takes his cap off, but there are already streaks of grey on that beard, one that seems to be some kind of emblem for Indian Test cricketers.

It is difficult being Virat Kohli. He seldom takes his cap off, but there are already streaks of grey on that beard, one that seems to be some kind of emblem for Indian Test cricketers. Kohli is arguably the greatest batsman in contemporary limited-overs cricket. As things stand now, he is the face of sport in India. He leads India in Test cricket. He already has a biography penned by Vijay Lokapally, a man who had attained cult status among Indian sport writers when he was not even born. Strategically placed television sets during match days may be a good idea to pacify the disgruntled standing in queues outside ATMs, though that will probably lead to heated arguments between fans of Sourav Ganguly and MS Dhoni. For whatever reason, cricket arguments in India invariably end that way. LIVE Cricket Scorecard: India vs England 2nd Test at Vizag

But we are digressing. We were discussing Kohli. About four years back the Kohli memes on the internet typically consisted of censored swear-words, probably for valid reasons. Then came memes and photographs with his celebrity female friend, thanks to the gossipmongers that fill up a substantial chunk of the cricket audience. But even that changed.

At some point of time the memes gave way to infographics showcasing Kohli s numbers for every year, for every financial year, performances in temperature between 28 C and 32 C, hundreds against sides where no fast bowler has a seven-character surname, and so on. You get the idea.

From a brash youngster Kohli has somehow metamorphosed into a superstar, more so in 2016, where he could do no wrong, in ODIs, in T20Is, in IPL. He has already attained legendary status in limited-overs cricket, but with Virat the appetite for big scores does not seem to wane.

The year before he had won a Test series in Sri Lanka and had near-whitewashed South Africa (one Test was washed out). This time he led India to a 2-0 win (their biggest win on West Indian soil) and a 3-0 whitewash over New Zealand at home.

By 2013 Kohli had checked all three boxes in 50-over cricket Under-19 World Cup, World Cup, and Champions Trophy. T20I glory has eluded his teams, but that has barely been his fault. Back in 2011 some had doubted his abilities as a Test cricketer, and he was drafted in as only an afterthought: Indian cricket should be grateful to Yashpal Sharma for that, but that is another story.

Runs, hundreds, overseas hundreds, daddy hundreds, amazing run as captain: he had them all. There was little left for him to achieve. He averages in excess of 60 in Australia, New Zealand, and South Africa; though he has played only 2 Tests in each of the last two, the overall numbers in the Southern Hemisphere read 1,478 runs at 64.26. Of all men from this side of the Equator, only Ken Barrington (77) and Wally Hammond (71.40) have averaged more with a 1,000-run cut-off. Kohli seems to understand Coriolis Force better than anyone.

But England remained unconquered. Till the Rajkot Test Kohli had 322 runs at 20.12 against England. It was not only about struggling in overseas conditions: even at home his 188 runs had come at 31.33. James Anderson is typically portrayed as the Englishman who bothers Kohli the most. It is forgotten that the last time England had toured India, Graeme Swann had dismissed Kohli thrice in 4 Tests.

Was it more about the approach than anything else? Kohli s strike rate against England was a sub-par 39. At home it used to be 35. There was something wrong that had to be sorted out.

Things have changed, of course. In 2012-13 Kohli batted below Sachin Tendulkar. Now he has taken over Tendulkar s position. He is the senior man now. He is the man they compare with Tendulkar.

He is captain now. Swann has gone. Anderson had been ruled out of the Rajkot Test. This was his chance. He had lost the toss, England had got 537, but Murali Vijay and Cheteshwar Pujara had taken the score to 277 for 2 when Kohli walked out.

Kohli trod on to the stumps against Adil Rashid for 40. That is still the only time he has been dismissed in the series, and even on that one occasion he was not bettered by a bowler: Kohli was dismissed by Kohli himself. Had he not grafted that unbeaten 49 in the second innings India might have lost the Test.

He won the toss at Visakhapatnam, but there was no 277 for 2 waiting for him. On a track conducive to turn India had lost 2 wickets inside the first 5 overs, to Stuart Broad and that man Anderson.

The first over was all about treading waters. Anderson mostly went for the line outside off that he has used to perfection to lure Kohli in the past, sneaking in a short-pitched delivery. Kohli responded with block, block, duck, leave, block, block: even-steven.

The first boundary was outside off. It was the shot Anderson wanted him to play. Kohli went ahead with it. He got those runs, but Anderson had reason to be optimistic.

Two balls later he bounced one: the pull came too late, and the top-edge soared over a vacant fine-leg. Kohli had managed two quick boundaries, but Anderson had won the first battle.

But Anderson was unfit as well. Alastair Cook took him off. Kohli responded with a beautiful square-drive off Ben Stokes that brought Vizag to its feet.

The feet were moving. The runs were coming. He was not getting bogged down.

Some diversion came when Pujara, desperate to throw his wicket away, changed his mind at last moment and pulled off spectacular dives (once with bat, once without) to save himself off consecutive balls.

They sorted out all that in their respective ways. Pujara, all suicidal motives forgotten, stretched his left leg halfway down the pitch to dead-bat everything. Kohli stepped out and dismissed Zafar Ansari over mid-on.

Cook got on Broad, who bowled a string of off-cutters before sneaking in the one that went the other way. Kohli was beaten. Kohli focused again.

This was his territory. He was the captain.

Down came his bat, just after lunch, the wrist turning ever so slightly: Anderson was dismissed to the mid-wicket fence. And a push off Rashid got him his fifty, his first against England since 2012.

He gave a chance, once again off the top-edge, this time off Stokes. Clearly short-pitches were getting the better of him. Stokes bounced again: this time Kohli absorbed it in his frame. Stokes steamed in. The next ball was too high.

The surge in adrenaline was evident. Kohli had to be tamed. Stokes bounced again. Mortals would have recoiled into defence. Instead, the pull beat the fielder.

Out came the cover-drive, the pull, those trademark Kohli shots. The hundred took him 154 balls. He went for some fun and tried to reverse-sweep and focused again.

Three overs before stumps, the 150 came up with a punch through cover. The landmark was brushed aside, as was the demons of England and Anderson. It is only the second Test of the series and Kohli will fail every now and then, but chances are few that they would come back to haunt Kohli again. 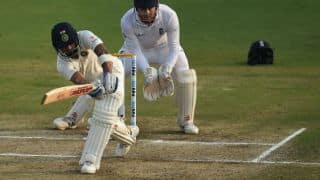