That Virat Kohli would lead India in their journey ahead after the greats walking away is something not many would have reckoned when he had arrived on the international scene. A brash young cricketer who had decided to take control of his life and cricket career having been chosen over 20 others with the same talent , Kohli did not have the easiest of starts. Conceived a spoilt and wild young man who was among a few extremely talented willow-yielders with inconsistency painted all over him, Kohli decided to change. In a few years Kohli transformed into a persona so huge that now he looms all over Indian cricket. The young, who earlier wanted to emulate Sachin Tendulkar, now want to follow every footstep that Kohli sets. FULL CRICKET SCORECARD: India vs England 2nd Test at Visakhapatnam

Looking back at the moment Kohli decided to change, he could not have been any more veracious. After all, it helped him stand apart from the 20 others with the same talent within no time. He had showcased his mettle in white-ball cricket, but when he played his first Test ahead of the likes of two heavy run-scorers from Mumbai, Ajinkya Rahane and Rohit Sharma, everything was on the right track in Indian cricket. The team were sitting pretty on the first spot in the ICC Test Rankings, had just won the 50-over World Cup in which Kohli had played a significant role, and ended with a statement which still carries profound meaning.

Sachin Tendulkar has carried the burden of the nation for 21 years. It was time we carried him, said Kohli to Nasser Hussain when India lifted the World Cup. Indeed, Kohli had made a statement which would never be forgotten in Indian cricket circles. But was he ready to take up the mantle from a batsman who always carried a billion expectations?

A century on debut did not happen in the Caribbean in 2011; Kohli waited till the year end to take on West Indies to score back-to-back fifties at Mumbai. In between, among the rabble that India had turned into, there was no place for him on England tour especially when India needed characters like him to hit back.

However, there was that Australia tour.

Little did Australia know there will be an Indian playing good, hard cricket their way in their backyard as a gobful came out of Kohli s mouth at Adelaide 2011-12 along with his first Test century: he finished as the only Indian to score a ton on that tour.

And the Indian fightback was not the Australians have imagined when Kohli led his team in getting agonisingly close to chasing 364 on the final day at his beloved Adelaide a few years later.

Kohli endured the hardships of playing Test cricket in England. There may not be a better lesson for modern-day batsmen with bulging biceps, thick bats and an imperious attitude towards bowlers than to play Test cricket in the Old Blighty. Kohli averaged 13.40 in 5 Tests in England, could not go beyond 39, and if you are thinking it was James Anderson who brought him to reality, you are wrong; the English bowler accounted for Kohli only 4 out of 10 times.

But before that, there were terrific tours of South Africa and New Zealand. In the 2 Tests in South Africa, Kohli notched up 119 and 96 at Johannesburg and 46 and 11 at Durban, ending up as the second-highest run-getter from either team. The New Zealand tour was not bad either. Kohli began with 4 in the first innings at Auckland, but recovered to score a fine 67 in the second innings. At Wellington, he amassed 38 and 105 not out. So what went wrong in England?

The moving ball. Kohli, like his peers in the team, has struggled against seam and swing. He did in England in 2014-15 and how much he has improved will be seen when India play another series there about one-and-a-half years from now.

The tour of Australia 2014-15 provided a sneak peek into the Kohli era. Standing in for MS Dhoni, Kohli showed a glimpse of what he wants Indian cricket team to look like. All of a sudden, aggression became a part of team so deeply ingrained as if it existed all the time and someone only needed to take off the lid. India fought at Adelaide Oval, Melbourne, Brisbane and Sydney, everywhere they played. Kohli hammered 4 centuries. Kohli looked eye-to-eye to that monster called Mitchell Johnson. Brad Haddin, David Warner and even Steven Smith they all were taught new lessons in sledging.

Kohli took over as Indian captain in Tests at the dawn of 2015, a year in which he registered significant success. Sri Lanka were rammed in their backyard 1-2 with Kohli s India coming from behind after losing the first Test embarrassingly to win the next two.

South Africa had stunned the Dhoni-led India in the ODIs and T20Is, but Kohli was going to be relentless when the Tests arrived. With a battery of spinners and flat decks at his perusal, Kohli ordered his bowlers to make mincemeat of the South African batting giants. None was spared. New Zealand and West Indies found no mercy either, and Kohli was off with an impressive debut in the captaining arena.

The recently-concluded opening Test of the five-match series against England began with nothing less than a defeat for India. Though the official result of the game was a tame draw, but Kohli would know that his side was out-batted, out-bowled and out-fielded for five days on the trot. With India and Kohli having a terrible recent past against England, it was important for Kohli and company to make a strong start, which they squandered by dropping several catches and being poor on the field.

Kohli s journey has just begun in more ways than one. He is finally up against an opponent that will give him sleepless nights, a bowling attack likely to belittle his batsmen and a batting-order his spinners will find tough to run through. But Kohli, as he has said, will not let take England for granted. Kohli has it in him to keep the squad on their toes and push them for better performances.

What happened at Rajkot would have been left behind; Visakhapatnam will be different. The second Test will give Kohli opportunity to start once again, and knowing someone who does not make the same mistake again, watch out for something special. 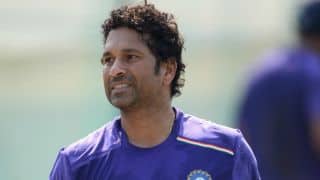