November 2013, Mitchell Johnson not only dismantled the England batting but also inflicted severe psychological blow to the side that needed a shake up to find its feet from the 0-5 nightmare. 3 years later, Alastair Cook's men found themselves in the Indian shores and in a similar situation.

The Englishmen have petrifying memories of the thick handlebar moustache. November 2013, Mitchell Johnson was not sporting it just for the Movember moment. The Australians had a plan for the Englishmen, who had won The Ashes a few months back. Johnson was on a mission. He not only dismantled the England batting but also inflicted severe psychological blow to the side that needed a shake up to find its feet from the 0-5 nightmare. Jonathan Trott‘s flourishing Test career took a hit. The short-pitched ploy had mentally disintegrated him out of the series, Graeme Swann retired midway and Kevin Pietersen became the whipping boy.

Three years later, Alastair Cook‘s men found themselves in the Indian shores and in a similar situation. They came close to winning the first Test at Rajkot before Virat Kohli s defiant 49 not out bailed the hosts out of embarrassment. The English confidence was sky-high but for Kohli, losing to England was never an option. For that matter, the Englishmen had caused enough grief to Kohli and India in recent past. They had halted India’s march in 2011, usurping their No. 1 Test ranking. In 2012-13, against all odds, they went on to beat India at home and more humiliation was in store in 2014. Especially for Kohli.

Australia were in a similar position, having lost three back-to-back Ashes. The slide had begun in 2009. The shattering bit was the 1-3 loss at home in 2010-11. Worse, in 2013, David Warner had punched Joe Root to fracture his own flourishing career and get shooed away from the English shores. Another Ashes defeat followed.

Johnson was not a part of the series that went 0-3 to England in 2013. A few months later, he architected one of cricket s most dramatic turnarounds. The mission began in Brisbane with a 9-wicket haul and continued until Sydney where it ended with a match tally of 6.

In between, he took another 22, finishing with 37 wickets from 5 Tests at 13.97. As per plan, Johnson was to be the terroriser and Ryan Harris the strike bowler. Harris played the perfect support with 22 scalps at just over 19.

Test cricket has witnessed bowlers claiming wickets in abundance, but Johnson s show was one of its kind. He terrified English batsmen, reducing them to a sight of school cricketers struggling at the international stage. Think Fred Trueman in 1952. Or Jeff Thomson in 1974-75. Or Michael Holding in 1976. You get the drift.

If the tour is tagged as a chapter in annals of English cricket, the name nightmare fits apt.

The buzz around social media on Sunday was God still bats at No. 4 for India . Kohli smashing 235 at his idol Sachin Tendulkar s home ground was surreal. The chants of Saa-chiiiin-Sachin gave way to Koh-liiii-Kohli .

When you set a benchmark, the expectation multiplies. Your flaws are dissected. They become the raging topic of discussions. That is the price you pay for greatness. Somewhere it makes you realise there is more contentment in mediocrity.

Back in 2014, Joe Root, the other modern great of the era, had escalated his reputation when he amassed 518 runs against the touring Indians at 103.60.

By then, Kohli has already embarked upon his mission of getting the world in his feet. The South Africa and New Zealand boxes were already ticked. The challenge lied in England. The Indians hoped Kohli would be the answer to Root s brilliance when the world came down shattering.

Kohli s reputation was reduced to being “Anderson s bunny”. James Anderson exploited his weakness around off-stump and the result was 134 runs at 13.40. India were felled 1-3.

They should have let him score. They should not have starved him. By now the world knows that a hungry Kohli has a larger appetite than the mythic demon Kumbhakarna.

Kohli and Johnson may have developed a mutual dislike but there is something common between them. They seem to enjoy hurting England.

Like Johnson, the Kohli show has physically worn out the Englishmen and mentally disoriented them. He was the difference before Ravichandran Ashwin figured out he was not being his usual, and decided to claim another five-for and a 10-wicket haul and a bagful of records. Yawwwnnn…

England’s 400 was a winning total. Of course, can whine with ‘had’s, and ‘if’s. But how do you stop Kohli? He can play pace, he can play spin, he has a sea of patience to grind it out, he can attack at will, he scores hundreds, he scores double-hundreds, he hits boundaries, he runs hard, he drives, he pulls, he plays square, he even sweeps these days, and he does not get tired. Worse, he does not get satisfied too.

Kohli’s unsatiated hunger against England has helped him become the first player in the game’s history to have a 50-plus average in all three formats.

One could now feel the plight of the 10-year-old pacers who were being bullied by the 15-year-old Pranav Dhanawade on his march to 1009 not out, earlier this year.

Kohli averages almost 89 across formats in 2016. This helps us imagine how good Don Bradman was. Poor England have to live the horrors again. Writers may have exhausted their adjectives describing Kohli’s rise and Oxford may be compelled to add a few. But Kohli and Bradman are mentioned in the same line these days.

Moeen Ali, Adil Rashid, Ben Stokes, Joe Root, Chris Woakes, Jake Ball and even Anderson gave it all and tried everything. What more?

Consider this. Cook took the new ball. Anderson got one past Jayant Yadav’s bat. Even the overenthusiastic Jonny Bairstow did not appeal for a catch. But Cook, in a desperate attempt to minimise the lead, consulted the seniormost member Anderson and went for a review.

There was daylight between bat and ball. England continued for another 30 overs without another review left. Was that it?

India’s lead was 45. Jayant got a nick into Bairstow’s gloves off Moeen. English fielders appealed and umpire ruled ‘not out’. A few overs back, stupidity cost them their last review but Cook called for one, only to realise they did not have another left.

Kohli gestured Cook with a mischievous smile that he had no review left. The latter chuckled disappointedly.

The feisty Stokes and Kohli have a bit of history this series. The verbal barrages and the ‘Ssshhh’ celebrations in Mohali seemed to be the foundation of another mutual dislike club.

But Stokes is smart. Immediately after Kohli departed for 235 he walked up to the champion and congratulated him.

Well, many of us surely missed this moment. #INDvENG #Kohli #Stokes pic.twitter.com/kMVyGNK5oP

Kohli made Stokes’ arrogance brittle or malleable let us say for now. Not sure if Stokes still will be spared when the master walks out again. But the English all-rounder was smart to make peace. But not Anderson.

“I’m not sure he’s changed.” Anderson said. “I just think any technical deficiencies he’s got aren’t in play out here. The wickets just take that out of the equation.

When that’s not there, he’s very much suited to playing in these conditions. He’s a very good player of spin and if you’re not bang on the money and don’t take your chances, he’ll punish you. We tried to stay patient against him, but he just waits and waits and waits. He just played really well.”

Anderson was perhaps being honest with his opinion but he did enough to earn the ire of many. Not a smart thing to do when Kohli has scored aplenty against you and on the same day when he registered his highest score of 235.

So, is Anderson most effective in English conditions?

The big mouths of Andy Caddick and Shoaib Akhtar big mouths were shut during the World Cup 2003.

Given the kind of form Kohli is in, Anderson will make these statements only if he is sure that he won’t play the next Test due to an injury or feign one. Even if that happens, Kohli has an elephantine memory.

Anderson also said he did not consider Ashwin and Jadeja “too difficult to handle”. It was a different story that he lasted six balls before holing out to Ashwin.

While avid fans thought Jos Buttler and Bairstow would look to follow the Kohli-Jayant script of the third and fourth days registering a record seventh-wicket stand, if not go the Dinesh Chandimal way of 2015 in Galle, England were found content surrendering meekly. They lost four wickets on fifth morning for 13.

It seemed their priority lay in hiding under the cushions of their hotel room, recovering from the Kohli effect. At least Rashid’s wicket suggested so when he eyed for the deep midwicket fielder.

No. He is out of the side. England do not have Kevin Pietersen. I can place a bet that he does not know black magic as well.

“I think Joe Root is ready to captain England. He is ready because he is a clued on guy, he’s got the respect of everyone in the changing room. He hasn’t got much captaincy experience but that doesn’t mean he can’t be a very good captain,” said Cook.

Cook may not be learning from his mistakes against Jadeja but for some reasons he is not the man who is blamed for anything.

Then who or what?

Will England review it Bairstow-style?

I doubt. He is not a ‘disruptive influence’.

England do not believe in overburdening cricketers with a lot of responsibilities. Root is their best batsman across formats. He is a family man and the logic goes, why overload him?

After all, everyone is not Virat Kohli. 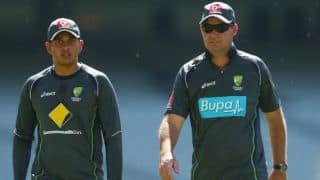 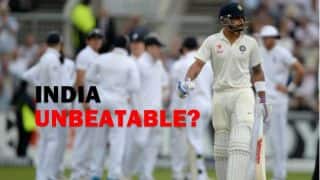