Coming into this series, Virat Kohli was the in-form batsman and a lot was expected of him.  In the Test series against New Zealand, he showed good intent to learn and adjusted his game. 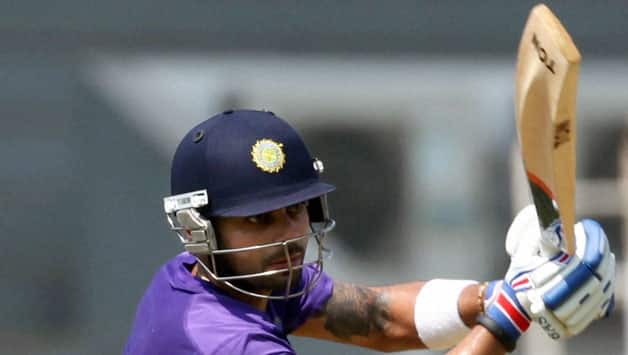 Kohli is a player with an attacking mindset and wants to get on top of the bowling. However, if he can discipline that approach a touch, he has greater chances of being successful © PTI

The once formidable Indian batting is now a miserable wreck. That such a brittle performance has come at home – where they were almost invincible – is astonishing. The visitors’ batsmen have looked more solid despite the general opinion being that they were inept against spin. However, the woes of the Indian batting aren’t about the lack of ability, but have more to do with application. England great Geoffrey Boycott pointed it out during his post match analysis at Kolkata that the Indian batsmen have committed too many errors during this series and that has been their undoing.

England’s batsmen have applied themselves brilliantly against the Indian spinners. Alastair Cook in particular has shown fantastic resolve and it is due to his efforts that England have made the turnaround. If one compares the two batting units in this series, one would see that England have cut out the errors after their defeat at Ahmedabad even as India have made far too many. There is a clear lack of application and a moment of indiscretion has led to a fall of a wicket.

Boycott particularly picked India’s new star Virat Kohli as someone who has made mistakes without making amends during this series. Coming into this series, he was the in-form batsman and a lot was expected of him.  In the Test series against New Zealand, he showed good intent to learn and adjusted his game. In the first Test of the series, he was out flashing at one outside the off-stump. Knowing that he cannot afford such mistakes, he tweaked his approach for the second game at Bangalore where he left a number of deliveries outside off. As a result, he scored a crucial hundred in the first innings and a match-winning fifty in the second.

Let us revisit all the five Kohli dismissals in this series:

1st innings: Kohli was caught on the crease by Graeme Swann – who went through the gate between bat and pad to disturb the woodwork. He tried coming forward, but was foxed in the length. The bat was away from the body and he couldn’t stop the off-break in time.

1st innings: With the England spinners causing problems, Indian batsmen needed to be measured in their approach. Cheteshwar Pujara was showing the necessary caution and was dealing with them well. However, with India on 118 for three, Kohli decided to give Monty Panesar a go and played an uppish shot into the hands of cover. It was a typical one-day heave and considering the situation he could have avoided it.

2nd innings: This was perhaps the most shocking dismissal of all. Talk about the ball spinning, this one did not even pitch. India were tottering in the second innings with Panesar and Swann wreaking havoc. Kohli gets a low full-toss and smashes it straight down mid-off’s throat.

1st innings: Kohli has been dismissed a few times in this fashion in the past. James Anderson bowled it a little outside off and was pitching in the corridor of uncertainty. Kohli didn’t move and merely poked at it tentatively to edge it to second slip.

2nd innings: Kohli went after another delivery outside off and was caught behind.

As one of the analysts noted, Kohli’s latest dismissal may point towards a weakness near the corridor of uncertainty. The tentative pokes and the lack of footwork are indicative of the flaw. More than anything, he has to leave deliveries like these. He has done it in the past – in the Test match at Bangalore – and there is no reason why he cannot do it again.

Kohli is a player with an attacking mindset and wants to get on top of the bowling. However, if he can discipline that approach a touch, he has greater chances of being successful. His dismissals in the second Test at Mumbai were poor shots and he certainly wouldn’t want to see them again. The ones at Kolkata are similar to his dismissals in the past. He can take a cue from someone like Pujara – who is a lot more disciplined when it comes to deliveries outside the off-stump. Kohli doesn’t have to get into the Pujara’s mindset, but that particular aspect can help him tremendously.

Considering Kohli’s rich vein of form in 2012, his performance during this series has been surprising. With each passing game he has improved this year and learnt from his mistakes. He needs to do the same this time around as three successive failures haven’t helped his cause. As a commentator pointed that Kohli wasn’t being singled out, but his mistakes are being discussed because they believe he is a good player who can get better.

Pakistan to convince Haroon Lorgat to be consultant for PPL