Revenge is a dish best served cold, they say. But Virat Kohli probably does not believe any in that, despite being on the losing side for several times against England earlier this decade. He is more of a believer in tit for tat.

Revenge is a dish best served cold, they say. But Virat Kohli probably does not believe any in that, despite being on the losing side for several times against England earlier this decade. He is more of a believer in tit for tat. With his unflinching swagger that generates from his supreme command over the game, combined with his ability to tower over every opponent, Kohli stands vindicated if he decides to have a go at the opposition. Mind you, this is a new Indian team, rapidly emerging from the process-driven era of MS Dhoni to the one under Kohli where nothing short of a victory is an acceptable result.

On Sunday, India provided another example of their mastery, and Kohli spiced up the win with yet another stinging remark on England that they surely did not see coming. If we get to 150, they are going to press the panic button. Watch, Kohli had told his partner Kedar Jadhav during one of India s most iconic ODI run-chases in Pune, during the first match against England. Let us stop for a moment, think. Exactly how did Kohli know England would press the panic button? From where did he get that idea? Does he know his opposition that well to know how they would behave in a certain situation?

The very idea of New England is all about being fearless.

Or is Kohli dragging England back to where they left India a few weeks ago for a 25-day break? Maybe he is.

England were all over the Indians at one stage in Pune, having reduced them to a mere 63 for 4 with most of India s top guns back in the hut. England sniffed more than a victory, having scored 350 earlier in the day, but that was a false impression.

Kohli proved to England he remains beyond them.

And perhaps, England may end up having not figured out how to stop Kohli, at least on this tour.

England can unleash James Anderson to test Kohli in the conditions he thrives in. But there is another one-and-a-half year left for India s next trip to England, and Kohli is only going to grow even better. What if Kohli emerges on the top?

First, England have to contemplate how do they go through the remaining five matches on this trip without being pillaged anymore by Kohli without being demolished further, being belittled anymore, being outplayed, out-thought or even out-spoken anymore.

If you took Virat s runs out of the game I know you can t do that but we have put their batters under a lot of pressure, he said after a crushing defeat in the second Test at Visakhapatnam.

The fact that Kohli is single-handedly demolishing England and even the fundamentals on which this New England is built either show just how majestic Kohli is or display some cracks in the pillars.

The Test series witnessed Kohli ripping England into pieces as a captain in his pomp as well as a batsman who was beyond them. More than 600 runs in the Test series were not enough; Kohli resumed England-bashing with a belligerent 122.

To see the approach they had obviously gave us assurance that once we get a couple of wickets, it will crumble pretty quickly because there wasn t much intent from the batsmen, Kohli had quipped post the win at Visakhapatnam.

In the first ODI, better intent was shown by Kohli and his team. In face of worst of adversities, Kohli inspired India to a win.

Have England even got a measure of what others in the Indian side can do?

One of the primary definitions of New England is decking up batting till No. 11 .

New England piled up their highest-ever ODI total in (and against) India, only to be shot down by two men with supreme talent. Kohli is time-proven. Underestimate Jadhav at your own peril.

There is Kedar Jadhav, one of many Indian domestic stars plundering thousands of runs inside one season. There is Hardik Pandya, who is rapidly freeing himself up from all emotional frenzy to become a cold-hearted goal-oriented finisher. If he remains on this path, India can let go of their concerns of not having finishers before Dhoni departs.

But what about Kohli? Is he satisfied having scored a belligerent century in one of the most improbable ODI chases? Surely, yes. Is Kohli satiated with yet another ton in ODI chases? Definitely.

But is he done belittling England? Certainly, no.

Kohli is aggression personified. I have felt in the past people have created limitations in their own head, in terms of what they can or can t do, he asseverates. 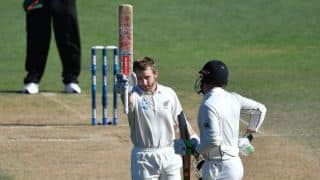