While Virat Kohli continues to topple records with his superlative efforts, Kumar Sangakkara has been setting domestic cricket around the world on fire.

Kumar Sangakkara finished his ODI career with 25 hundreds.He registered his last hundred in his penultimate ODI, his 403rd (379th innings) to be precise. This is Sangakkara, one of the finest batsmen to grace the sport and he finished with fourth-most three-figures in ODIs, behind Sachin Tendulkar (49), Ricky Ponting (30) and countryman Sanath Jayasuriya (28).

He has played 29 ODIs since then. Kohli already has 34 hundreds and is 15 short of Sachin Tendulkar s world record tally. In fact, he has scored 12 hundreds (as many Dravid scored in his career and two more than Dhoni) in his last 40 ODIs.

Kohli s No. 34 was amongst his finest. 160 not out, where he ran a hundred of them, in not so easy conditions, against South Africa at Cape Town.

Is Kohli making a mockery of past records? Or, it s just superhuman? Perhaps the latter or at least Sanga believes so.

It s a superhuman effort, isn t it? He just got this formulae of scoring runs, Sangakkara told CricketCountry during the Hong Kong T20 Blitz 2018 after leading Galaxy Gladiators Lantau (GGL) to a nail-biting win against Hung Hom Jaguars (HHJ).

Lavishing further praise on the Indian skipper, Sanga added: To me, he is one of the best batsmen I have ever seen in my life, especially in the shorter versions. He has got a great hunger to replicate that at Test level and is doing that.

Kohli finished 2017 with 2,818 runs across formats, the most by any cricketer and third-most by any batsman in a calendar year. Sangakkara s tally of 2,868 in 2014 still tops the charts. Kohli could have gone past Sanga s tally had he played the ODIs and T20Is against Sri Lanka. However, Sanga had famously remarked last year: I don t think that will last long the way Kohli is batting. He will probably overtake it next year and then do it again the year after. He is a different class.

Not even a month-and-a-half into 2018, and Kohli already has plundered 608 runs from 6 matches (3 Tests and 3 ODIs), notching up 3 centuries. He is on course to accomplish Sanga s prediction.

Both Sanga and Kohli have often spoilt each other s parties. Kohli s resilient 35 in 2011 World Cup final played a huge role in India s triumph, quashing the then Sri Lankan skipper s dream of laying hands on the trophy.

Three years on, Sanga would return the favour. Sanga s quick 52* in the final ensured Sri Lanka won their maiden World T20 title and him the Man of the Match award too. Kohli was head and shoulders above any other batter in the tournament, getting 77 in the final and bagging the Man of the Tournament award but India finished second-best.

However, over the years, the duo has shared a wonderful camaraderie. Kohli ensured Sanga a fitting farewell and paid rich tributes to the Sri Lankan stalwart as he left the arena.

Here is Kohli s letter to Sanga on retirement:

His ability is phenomenal and he is just a run-machine and beyond that he is a lovely guy, who has a great passion for the game, signed off Sanga.

While Kohli continues to topple records with his superlative efforts, Sanga has been setting domestic cricket around the world on fire. He did it for Surrey last year and his 42-ball 92 on Friday, won GGL their second game on a trot in Hong Kong T20 Blitz. 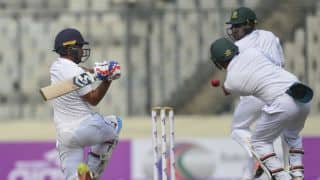 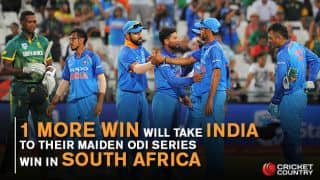