Nishad Pai Vaidya reviews Virat Kohli’s ton, which came in the back-drop of intense criticism over his captaincy. 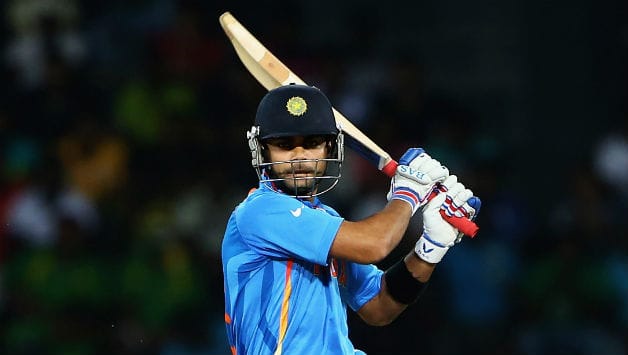 Nishad Pai Vaidya reviews Virat Kohli’s ton, which came in the back-drop of intense criticism over his captaincy.
Playing the responsible yet dashing role, Virat Kohli propelled India to a comprehensive victory over the West Indies in the tri-series encounter in the Caribbean. Losing their first two One-Day Internationals (ODIs) in the tournament was a rude shock for a team that had tasted crowning glory at the ICC Champions Trophy 2013 last month. Mahendra Singh Dhoni’s absence due to injury thrust the responsibility on Kohli — who was criticised as India slumped to a massive defeat to Sri Lanka on July 2. However, a few days on, he has given a fitting reply to his critics.

Kohli is a true champion who hates committing the same mistakes. He has this ability to learn from his follies and make quick amends to ensure that it doesn’t become an unwanted habit. The two defeats would certainly have been a huge learning experience as captaining at the highest level is a different kettle of fish. He may have led the Royal Challengers Bangalore in the Indian Premier League (IPL), but leading India has a different pressure associated with it.

It was time he took matters in his own hands and let his bat do all the talking. The Indian openers — Shikhar Dhawan and Rohit Sharma — had set up a good platform for the middle-order to build upon. However, India kept losing wickets at regular intervals. Through all that Kohli remained calm and held one end. He has been India’s mainstay for over two years and has absorbed the pressure in tough situations. This time around, his body language oozed responsibility and there was something that said that he was there to stay. His determination was evident and rarely did he execute a false stroke.

The remarkable thing about Kohli’s innings was the way he paced it. Although India amassed a total of 311 for seven, it wasn’t the easiest wicket to bat on. A batsman couldn’t come in and assert his authority right from the word go. The Indian openers’ effort was proof of that and Kohli studied the proceedings to chart his approach. When he entered the arena, he farmed the strike and tried to get his eye in. It was imperative that he settled quickly as India could ill-afford a collapse along the lines of the one that occurred in Jamaica against Sri Lanka.

West Indies were chipping away with regular strikes and at one stage it looked as if they would restrict India to a gettable score. That is when Kohli took control of the game. Until then, he was patient and only struck the odd boundary. Even when he decided to attack, his balance at the crease was exemplary. Anything that was pitched short and directed towards his body, was pulled with disdain. There were times when he made room and lofted the ball over the off-side. On both occasions, his head was right over the ball and he was middling it to perfection. Getting to the three figure mark was a huge relief and it would have helped him conquer a few demons that grew over the last few days.

In every difficulty, Kohli seems to find a new side to his game. This knock has assured fans that he can shoulder the burden of captaincy and yet score runs with conviction. If one analyses all the hundreds he has scored in one-day cricket, one would find that they have come in contrasting situations with varying degrees of difficulty. The latest one is a milestone in its own way as it is his first with the captain’s arm-band. When a batsman is appointed captain, the first concern is whether it would affect his main trade. For now, those fears have been put to rest, but a long road lay ahead. Looking ahead, Kohli would say, “Let my bat do all the talking.”