Virat Kohli now holds the record for the most runs by an Indian in T20 cricket.

Virat Kohli on Saturday surpassed Suresh Raina to become the Indian batsman with most runs in T20 cricket.

While turning out for Royal Challengers Bangalore in an Indian Premier League match against Kings XI Punjab, Kohli played a match-winning hand, hitting 67 off 53 to guide his team to their first win of the ongoing season to thus break a losing streak of six matches.

Overall, he’s moved up a spot at sixth in the list of all-time leading run-getter in cricket’s shortest format, a list led by Jamaican Chris Gayle who has scored an incredible 12640 runs in 378 T20s.

2263 of Kohli’s runs in T20 cricket have come in international cricket in 67 appearances at an excellent average of 50.28 including 20 half-centuries.

At international level, he’s third on the list which topped by his countrymate Rohit Sharma

His innings was timely considering RCB needed to win their Saturday night encounter against KXIP to stay alive in the tournament. They had made a wretched start to their campaign equalling the record for the worst start by any team to an IPL season.

They lost six straight matches while languishing at the bottom of the IPL points table before scoring their first points which have kept them alive in the tournament. 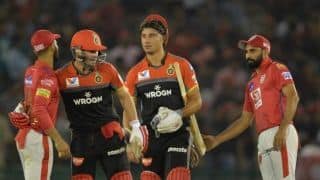