The second Test between India and South Africa, at Centurion, continued swinging sides.

The second Test between India and South Africa, at Centurion, continued swinging sides. South Africa have gained the upper hand by reducing India to 183 for 5 after putting up 335. The hosts have lost just two Tests at the venue, and the odds are heavily stacked against India. However, India have their captain Virat Kohli at the crease, batting on 85.

Mohammed Shami has this uncanny knack of producing that one dazzling spell amidst mediocrity. He had a tough time on Day One, bowled fuller and remained largely ineffective. Shami got the new ball only after it was over 10 overs old, and was immediately on the money.

Shami registered his 100th Test wicket. He is only the seventh Indian pacer to this club after Kapil Dev, Karshan Ghavri, Javagal Srinath, Zaheer Khan, Irfan Pathan and Ishant Sharma. He is the third quickest to the club in terms of matches. Kapil got it in his 25th Test, Pathan in his 28th and Shami in 29th. Srinath had taken a Test more.

This remained Shami’s only wicket.

There were three catches dropped off Ravichandran Ashwin on Day Two. India had four pacers, but Ashwin ended up bowling 38.5 overs, that is, almost 34 per cent of India’s quota in the first innings.

Barring West Indies, in the 11 Tests that Ashwin has played outside subcontinent in Australia, South Africa and England, this is only the second occasion he has picked a four-wicket haul. The previous instance was 4 for 105 at Sydney in 2014-15. This time he pocketed 4 for 113.

Graeme Smith’s 5 for 110 is the only better figures by a spinner than Ashwin in first innings of a Centurion Test. No other spinner even has 3 wickets in the first innings at this venue.

Ishant – the 2nd senior most

I take immense pleasure mentioning about Ishant Sharma’s seniority. He was controversially included in the XI at the expense of an in-form Bhuvneshwar Kumar. This is Ishant’s 80th Test, and he is the second-most experienced bowler in the Test, the first being Morne Morkel with 81 matches.

Morkel and Ishant both made it to their respective squads in the same series India’s tour of South Africa 2006-07. Though it’s a different story that their careers panned in different ways, Morkel has 57 more wickets than Ishant from just 1 more Test.

Ishant bowled well at Centurion though. He managed to clean up AB de Villiers and Faf du Plessis.

A first for South Africa!

India batted an over before lunch. Faf du Plessis surprised all by opening the bowling with left-arm orthodox bowling of Keshav Maharaj. The last time they did so at home was in 2000, against England at Cape Town. Hansie Cronje was the captain and he opened the second innings with Paul Adams, who claimed a three-wicket haul.

The last spinner to open the bowling for South Africa in the first innings was Aubrey Faulkner, at The Oval in 1912. George Rowe in 1896 was the first to do so.

A first for Pujara

KL Rahul was dismissed caught and bowled by Morne Morkel. Amid all the intent talks, Cheteshwar Pujara walked out and immediately pressed for a single. He had dabbed it to midwicket and sprinted, but debutant Lungi Ngidi rocketing direct-hit won the race. Pujara was out for a golden duck the first of his career. Overall this was the fourth duck of his career.

Pujara and Amla, a rare club

What’s common between Pujara and Hashim Amla? They both bat at No.3. They are men with mighty patience and average around the 50 mark. Both have their origins in the Indian state of Gujarat and have played for the same IPL franchise (not together though), Kings XI Punjab. It is not about all these.

Cricket statistician Bharat Seervi notes that Amla and Pujara being run out in this Test is only the 17th instance when both teams’ No. 3 batsman got run out in the first innings.

Kohli in a rare club, too

Only four times out of seven tours, an Indian captain has managed to breach the fifty-run mark in South Africa. Sachin Tendulkar’s 169 at Cape Town in 1996-97 tops the charts, followed by MS Dhoni’s 90 at Centurion in 2010-11. Kohli is 85* and has a chance to do the Tendulkar. The other half-centurion as captain is Mohammad Azharuddin. He got a 60 at Port Elizabeth in 1992-93.

Lowest batting averages for an Indian batsman with minimum 5 Tests against South Africa.

Parthiv Patel has played 24 Tests in a career spanning close to 16 years. The last time he batted (or played) in a Test outside subcontinent, was at Sydney, in January 2004. Yes, Steve Waugh’s farewell Test. Parthiv was under 19 then and now Waugh’s son, Austin, is representing Australia in the Under-19 World Cup.Parthiv, replacing Wriddhiman Saha, dropped 2 catches behind the stumps. He did not shine with the bat either, managing just 19, before falling to pacer Ngidi, handing South Africa’s 334th Test cap his maiden wicket. 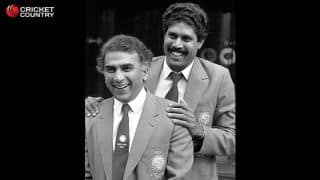