The baton of captaincy was passed on to a teenage named Virat Kohli after M S Dhoni unceremoniously announced his retirement from Test cricket during India's tour of Australia 2014-15.

Progress is impossible without change. Everyone has a superannuation time in every field of life from politics to business to sports, and cricket is no different. Time and change waits for no one, as this vicious circle keeps rebounding from one person to another. Being a team sport, it is of premium that someone is present to helm — a band of boys and evolve them into an army of men. Football for example uses managerial expertise to its team benefit, even though they have an assigned captain in the side, what is more of a namesake title here. Cricket is very different in this sense, as it is the captain who controls the field and uses his troops at his behest in accordance to the various straggles jotted down off the ground. In a country like India, a captain can either become a god-like-entity, who is held high on pedestal, or be turned into a demon and be burned down into ashes. India has been lucky to have captains who have taken its cricket to greater height in one or the other sense from time to time.

From Kapil Dev’s World Cup triumph in 1983 to Sunil Gavaskar’s victory in World Championship of Cricket, Indian cricket saw a radical shift in its stature as a cricketing nation. These wins gave a generation of players an imagination to represent their country in their own individual manner and leave a mark on the history of cricket in India.  1990’s will always be famous for the game of musical chair played by the Board of Control for Cricket in India (BCCI) to designate a full time long-term captain, shifting from Mohammad Azharuddin to Sachin Tendulkar and back and fro. It was clear that egos in the team were hampering its chances of winning. After fixing scandal, which rocked Indian cricket, it was upon a young and lively Sourav Ganguly who accepted the position of captain and then the rest as they say is history.

Ganguly Era:  Ganguly who was enlisted to get Indian cricket out of it rotten state of affair, had players such as Tendulkar, VVS Laxman, Rahul Dravid and Anil Kumble to offer their services to him. Apart from Tendulkar and Kumble, every one else was yet to make a mark on the international stage and Ganguly being the firebrand leader, wanted to take the world by storm. He started to clean Indian cricket and started out hand picking players from domestic cricket, which yielded greater result for the game. Ganguly picked Yuvraj Singh in 2000 ICC Knockout Trophy, Virender Sehwag during India’s tour to South Africa in 00′, Zaheer Khan and Ashish Nehra also in the 99′-00’s and trusted Harbhajan Singh’s capability against an unbeatable Australia in 00-01’ Test series.

Ganguly backed these players tooth and nail, which slowly changed the perception of the Indian team in the world. India became more aggressive, innovative and started taking risks. MS Dhoni was himself handpicked up Ganguly to represent the county in 2004. Under Ganguly, players like Laxman, Tendulkar, Dravid and Kumble flourished like never before only because he instilled confidence in the players, which helped everyone share the responsibility in the team. Dhoni became a regular and slowly became an important cog in the wheel of the Indian team. Yuvraj along with Dhoni started forming a pair that would go on to lift trophies and create history on the field together.

Dhoni Era: Dhoni under Ganguly was learning from the very best India had ever seen. Come 2007, Dhoni championed India to the inaugural Twenty 20 (T20) victory and become the One-Day International skipper. Test captaincy was passed on to him in a natural progression in 2008. Passed to him was an ODI team which had players established and finished material and Test side which consisted of the ‘Famed Fab 4’ and stalwarts who had served India for long. Dhoni, with a fully cooked side, took India to the No. 1 Test ranking in the world in 2009 and the team stayed there for 18-long months. Dhoni was to engrave his name in the history books of Indian cricket when he lifted the ICC Cricket World Cup 2011 in India and became a part of academia curriculum.

Brewing somewhere between these legends was Virat Kohli, who post winning the ICC Under-19 World Cup caught the eye of national selectors at a very young age. Slowly and steadily, Kohli started coming up the ranks in the ODI system and cemented his place in the side. With the exclusion of India’s most esteemed batting line-up, India and Dhoni started to feel the heat in the Test arena losing almost every series abroad. Foresightedness of Dhoni and selectors saw young and consistent domestic performers get a chance to share the dressing room with Indian crickets most priced stars, who were nearing the end of their illustrious careers.

Ajinkya Rahane, Ishant Sharma, Ravindra Jadeja,  Shikhar Dhawan, Cheteshwar Pujara, Murali Vijay and Ravichandran Ashwin were called-upon and were tested time and again. Each one of them surprised but the level of consistency was lacking. In due time and with a lot of perseverance these players started producing instances of individual brilliance to labour Indian Test team into a raging tiger at home. By the early 2014, Dhoni started showing signs of mental fatigue and look not-so innovative in Tests.

This promoted Kohli to be given the vice-captain duty, and mind you Kohli was scoring runs by the ton and was reputed to be aggressive and vocal in oppose to Dhoni’s calm and composed demeanour. By the turn of 2014, it became evident that the pressure of losses was mounting on Dhoni in Tests, even though he had a competent and truculent team to marshal. Dhoni soon decided it was time after loss against Australia in the second Test Down Under in 2014, as he unceremoniously announced his retirement from Test cricket. In ODI’s, Dhoni still remained the numero uno person and with a robust side filled with players like Suresh Raina, Rohit Sharma, Dhawan, Bhuvneshwar Kumar and Kohli himself —  Indian team has reached the moon and shows no intent of coming down from there without grabbing a last hurrah memorabilia in the form of ICC Champions Trophy 2017 in England for their celebrated skipper.

After Dhoni, Kohli has taken over the reins of the Indian Test team and has had a fairly good track record so far. Players such as Vijay, Rahane and Ashwin have now being the cornerstone of the team. Fringe players are still trying to cement their place in the side but the bench strength looks good enough to be field anytime of the year. India may have lost consecutive tour to England and Australia under Dhoni, but this Kohli led team has the calibre, precision in their skills and tenacity to out play any team under challenging conditions. Kohli’s first assignment was against Sri Lanka were he became victorious and displayed faith in the youngsters well.

Next assignment was at home against a dashing and strong South Africa, who got decimated and dusted away like particles with Ashwin and Pujara came into their own. India toured the West Indies and won there comfortably, as Kohli again remained untested. New Zealand flew 11,963 kms to take on the Men in Blue in India’s own backyard for a three-Test series. This commenced a long season for Kohli and his men, where India play 13-Test at home with the likes of England, Australia voyaging into what is know for them as the final frontier.

India won their first and the nation’s 500th Test at Kanpur quite easily against the BlackCaps. Kohli now has his eye set on Eden Gardens at Kolkata, where India play their 250th Test at home, which is also the second Test of the series, and his band of brothers will want to make it a memorable one. A major quality Kohli imbibed from Dhoni is that he backs his players with all his might irrespective of the opposition, or resistance against him (Rohit, Dhawan). Kohli is known to spring a few surprises which is unlike Dhoni but reminds one of Ganguly who was know to use every trick in the book to take his counterpart by surprise.

Kohli still has a very juvenile side when it comes to the team Dhoni inherited but has in his arsenal soldiers who can fend off any provocation thrown at them. Much like every other Indian captain, Kohli will take time to become a legend but by his own acumen, and his understanding of administrative and practical skills much like a gubernatorial leader.

(Vishal Mehra is a journalist with CricketCountry, who enjoys his weekly dose of anime, monthly viewing of sitcoms, daily playing of cricket once every few hours moon, and currently venturing into table-tennis . His twitter handle is @capturethecatch ) 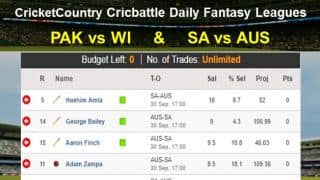 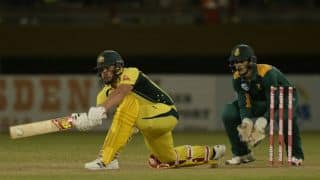 South Africa vs Australia: David Warner vs Dale Steyn and other key battles