Since his debut, Kohli has often proved his mettle in chasing targets. As Gavaskar pointed out, "Kohli shows tremendous skills and a lot of self belief at a young age." That exuberant self-belief allows him to absorb pressure very well - a quality essential in every international sportsperson. 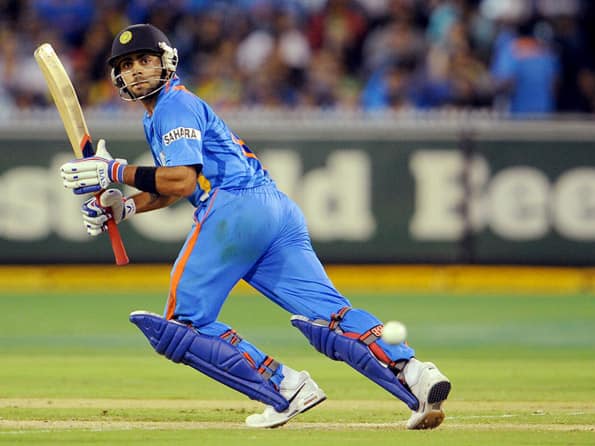 The Commonwealth Bank (CB) series has seen numerous thrilling finishes, but none more spectacular than the one at Hobart in the game featuring India and Sri Lanka. The series started with the world raving about Mahendra Singh Dhoni’s finishing abilities and lavished praises on his record in successful run-chases. However, the rank of finisher-in-chief has moved up the Indian batting order and now rests upon the young shoulders of Virat Kohli.

A lot has been said and written about Kohli’s knock against Sri Lanka – his massacre of Lasith Malinga in particular. Yet one fall short of words to describe and appreciate the monumental effort. Since his debut, Kohli has often proved his mettle in chasing targets. As Sunil Gavaskar pointed out, “Kohli shows tremendous skills and a lot of self belief at a young age.” That exuberant self-belief allows him to absorb pressure very well – a quality essential in every international sportsperson.

Kohli’s prolific record while chasing bears testament to his strong character and self belief. On numerous occasions, he has anchored run-chases after early wickets and has achieved the positive results. If we take a look at the batsmen with the highest averages in run-chases, Kohli’s name is present in the top five, ahead of some of the finest batsmen the world has seen.

Here are the said numbers:

It is interesting to note that despite playing the least number of matches in the above list, Kohli has scored six hundreds while batting second – more than anybody in the given table. That places him ahead of the table toppers Shane Watson, Michael Clarke and Michael Bevan. To top it all, all those six tons have come in victorious causes. He has remained not out on only eight occasions, which brings his average in perspective. In fact, during three of those tons, he fell with India on the brink of victory. Had he remained unbeaten on those occasions, he would have certainly challenged the table topper Watson – if not beaten him.

There are many illustrious batsmen who have an inferior average while batting second when compared to Kohli. Let us have a look at some of the greats of ODI cricket and their records while chasing.

Kohli – Ahead of Inzamam & Kallis in centuries scored in run-chases

It is true that Kohli has played lot fewer matches than these stalwarts, but six hundreds in 47 run-chases is simply brilliant. He has already surpassed Inzamam-ul-Haq and Jacques Kallis in the number of tons scored while chasing and is just one short of Sourav Ganguly. Furthermore, Sachin Tendulkar, the table topper has scored 17 tons, but has made them over 235 matches (231 innings to be precise). With half a dozen to his name in under 50 games, Kohli is poised to surpass some of these modern greats. It is possible if and only if, he maintains this prolific run as the years progress. That would be a challenge and a true test of his ability.

The stats in this article clearly illustrate the phenomenon that is Virat Kohli. No wonder Gavaskar was reminded of legendary names like Tendulkar and Rahul Dravid at the same age!