When Virat Kohli was nearing his ton on Sunday morning against Australia, it rekindled memories of his scintillating century at Adelaide. His celebration there was emotional. He made a trademark jump while completing his 100th run, took his helmet off, raised his bat and let out a few expletives. He was hungry and in search of revenge against the Aussies who tormented his team throughout the series. 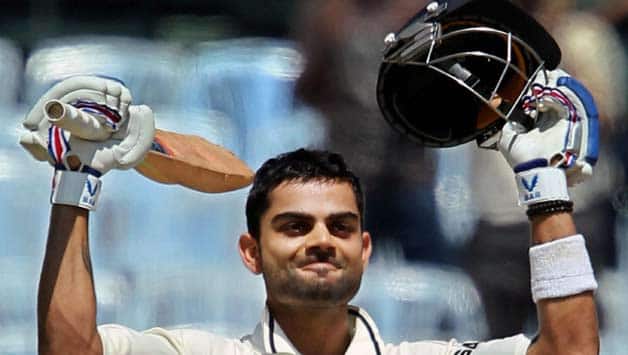 When Virat Kohli was nearing his ton on Sunday morning against Australia, it rekindled memories of his scintillating century at Adelaide. His celebration there was emotional. He made a trademark jump while completing his 100th run, took his helmet off, raised his bat and let out a few expletives. He was hungry and in search of revenge against the Aussies who tormented his team throughout the series.

After a glorious year with the bat in 2012, Kohli struggled to make a mark against England. Experts began shuttling their views from ‘future captain’ to ‘one-year wonder.’ The slight murmur of the lack of temperament began to gain voice yet again as Kohli was looking for a good start to a new year.

After struggling to play a meaningful innings in the first three Tests of the series against England, the 24-year-old scored a century in the fourth Test at Nagpur.

When he walked out to bat at Chennai, India were 105 for three — still trailing Australia’s total by 275 runs. James Pattinson had just broken an important stand between Sachin Tendulkar and Cheteshwar Pujara and was looking hungrier than ever after picking all three Indian wickets to fall at that point of time. But, Michael Clarke continued his mysterious policy of limiting him to three-over spells. It allowed Kohli to settle in a lot quicker.

Tendulkar seemed in as good touch as he was in the Irani Trophy as he reached his half-century in the company of Kohli.

Kohli too looked solid and began to play a lot freely once he got his eye in. There were a few exquisite strokes on Day One: a pierce through the security at short midwicket and a caress to wide delivery through extra-cover boundary. He played a couple of glorious shots off Nathan Lyon. The off-spinner tossed one up, inviting Kohli to play over the top. But Kohli managed to stretch well to reach the ball and help it to the cover boundary. With each shot his confidence was on the rise and at one point he even managed to find the tiny gap between mid-off and cover. The duo batted till the end of day and took India 182 for three at close on the second play — Tendulkar on 71 and Kohli on 50.

The consolidation on Day Three

It wasn’t the best start to a Sunday, as far as the fans were concerned. The man they all came to watch managed to add just 10 more runs to his total as Lyon’s spinning delivery went through Tendulkar’s defense.

Skipper Mahendra Singh Dhoni joined Kohli and the duo began the work of steadying the Indian ship and taking India past the Australian total. Lyon was able to generate a potent mix of variable bounce and turn to trouble Kohli. But the Indian duo managed to play him out and shifted gears against the faster bowlers. They were at their counter-attacking best as they added 67 runs in just over 15 overs. Kohli went in for lunch at 83, an innings laced with 10 boundaries and a six.

The Aussies opted for the new ball right after lunch but that didn’t help their cause as the runs continued to come. Kohli threw caution to the winds as he went about cutting and slicing at Pattinson and Starc who failed to utilize the new ball well. It took him a nice flick towards mid-wicket boundary to bring up his hundred, his second in consecutive Tests.

A keen follower of Kohli’s international career would have expected the youngster to purge out his emotions and let out a few expletives. But, on Sunday, it was quite uncharacteristic. There was no anger, no outburst, no extended jubilation. Just a smile, that spoke a thousand words. Here was a man who was more relieved than ecstatic to have turned up in the very first innings of an important series and done his job. The importance was reflected in the dressing room’s reaction too. A standing ovation from the entire dressing room was testimony to the fact that Kohli’s form was indeed of paramount importance to the side in such a series. Tendulkar’s applause was longer than any of his other colleagues as he knew the importance of that knock.

The final icing on the cake was the scene of Kohli taking off his helmet and kissing the Indian crest. Kohli’s reaction, here too, was emotional and yet surreal, signaling for better things to come for years from now.