In the past week, batsmen have come out shining in conditions predicted to be a haven for bowlers.

In the past one week, batsmen have come out shining in conditions predicted to be a haven for fast bowlers. Abhijit Banare elaborates on the uniqueness of these performers and the way they absorbed pressure.

Before the start of two respective Tests at Perth and Johannesburg, one venue was known for its pace and bounce and at the other venue, the visitors were supposedly going to be crushed after they faltered in the One-Day International (ODI) series against South Africa. So, when we consider those factors, it can be said that Steve Smith, Ben Stokes and Virat Kohli played exemplary knocks under pressure cooker situations.

Steve Smith: There was a cushion of 2-0 lead and playing in home conditions. But there was no denying the kind of pressure under which the  22-year-old Smith scored a ton in testing conditions. Smith presented a brilliant display of batting by playing as responsibly as any other experienced veteran batsman would do in such a situation. Not to forget that Smith was hardly considered as a Test batsman when he started off his international career, but was known more so as a bits-and-pieces cricketer fit for Twenty20s (T20s). However, Smith has shown that he is one among the many players emerging on the radar who are adept at being effective across formats.

Ben Stokes: Now, Stokes was just playing the second Test of his career against Australia on a track with pace and bounce, and when we consider the kind of pressure applied by the Australians on him, it could have seen a young batsman lose the plot. But Stokes handled the pressure well and in fact, put some of the pressure back onto the Australian bowlers by playing some dominating strokes. Day Five was a different story altogether. Even though, those threatening cracks in the third Test didn’t fetch a wicket, it undoubtedly made a dent in the concentration prowess of batsmen. One common aspect of both Smith and Stokes was that they were not hesitant to pull the ball which isn’t a fancied shot on Perth-like pitches.

Virat Kohli: Unlike the players mentioned before, Kohli is burdened with expectations every time he walks out to bat, home or away. Going into a Test, where India were considered underdogs. Or to describe in a different way — expected to be bounced out, Kohli made his presence felt with his potential match-winning ton. Whatever happens with the result of the series, there would be one thing that critics would think twice about — Kohli’s ability in Tests or his ability to face pace and bounce. He has done it at Perth and now against a world-class pace attack. Much has already been spoken about his range of strokes and talent. But it takes a lot more than that to do well in alien conditions.

Meanwhile, a batsman like Cheteshwar Pujara is cutout for the longest format. His patience and ability to grind the bowlers was visible in his second innings ton as well as in the first innings of the first Test against South Africa. Similarly, David Warner and Shane Watson too played some fine innings, but the likes of Smith, Kohli and Stokes were at a slightly different kind of level, while dealing with the pressure.

One possible reason for their success early on in their respective careers under tough conditions relates to the way the pressure is absorbed these days by cricketers at the top echelons of the game. It’s been a process which has percolated from T20s into ODIs and from ODIs into Test cricket. T20 cricket helped to make 200 in 20 overs look pretty normal. ODIs soon saw a different style of cricket, where any target isn’t big enough and chased with utmost ease. It doesn’t necessarily mean that, Tests are going to see more boundaries and sixes or run-rates of over four runs per over. But the challenge of playing the longest format and the pressure of emerging successful is something that has changed these days. It’s refreshing to see a positive intent among batsmen under tough conditions.

While there is much to look forward to watching a new generation of players scripting their success, innings like the ones mentioned in the article only makes Test cricket more watchable. 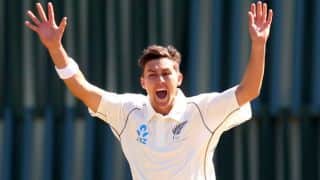