Sarang Bhalerao studies Virat Kohli’s statistics in One-Day Internationals (ODIs) and compares them to some of India’s best batsmen. 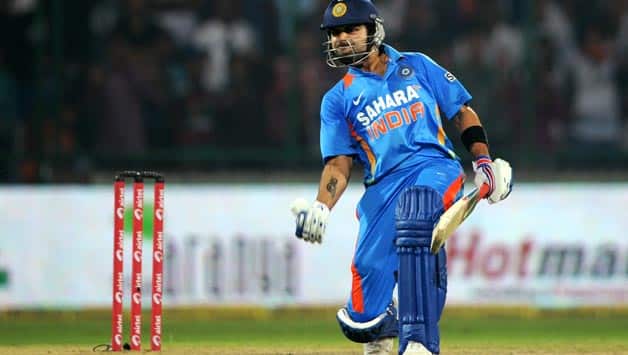 Virat Kohli has scored nine of his 15 ODI hundreds when India have been made to chase, which is a proof of his importance to this Indian batting line-up © Getty Images

Sarang Bhalerao studies Virat Kohli’s statistics in One-Day Internationals (ODIs) and compares them to some of India’s best batsmen.

During the two run-chases on the tour to Zimbabwe so far, Indian captain Virat Kohli has looked head and shoulders above his troops. Right through his career, Kohli’s batting has shown a penchant for big scores and his conversion rate has been phenomenal. In this article, we will analyse Kohli’s one-day career and see where he stands in comparison with some of India’s best batsmen.

Let us first have a look at the conversation rates of India’s highest run-scorers in One-Day Internationals (ODIs). Please note that conversion rate is the ratio between the number of hundreds scored by a batsman to the fifties. It helps us determine the rate at which a batsman converts his fifties into scores of three figures. Here is the statistical table:

As is evident from this table, Kohli’s conversion rate is the best amongst the top ten run-getters for India in ODIs. His ratio is a phenomenal 0.62 and Sachin Tendulkar is next at 0.51. A pertinent fact is that Tendulkar maintained that figure through a career that spanned over 450 matches. It is a challenge for Kohli to maintain his high standards and challenge the Little Master’s mark.

The other great thing about Kohli’s batting in ODIs is that he is very consistent in run-chases and has finished numerous games for India. For Indian batsmen who have scored more than 2000 runs while chasing, Kohli boasts of the highest average. Here is the relevant list:

Kohli’s average while chasing a total is 11 notches higher than his career figure.  His conversion rate while batting second is 0.56 (nine hundreds and 16 fifties) in 61 innings; which means Kohli gets to a fifty in every three outings. The other pertinent detail is that Kohli has scored nine of his 15 ODI hundreds when India have been made to chase. That in itself is proof of his importance to this Indian batting line-up. He absorbs the pressure and the rest bat around him in such situations.

Leading a young side in Zimbabwe, Kohli is undoubtedly India’s best batsman. Let us now have a look at the home and away averages of India’s batsmen who are currently touring Zimbabwe.

Deviation: Difference between the away and home average

Kohli’s away average is 52.48 compared to 45.02 at home. His  deviation is 7.46, which means he relishes playing in foreign territory. In contrast, Rohit Sharma’s average has a deviation of  -16.63. He averages 28.83 away and 45.46 at home. Sharma has played only 17 games at home while 84 have been overseas. Although this team is young, one can say that Kohli stands out on foreign soil. Rohit and Raina are the other two experienced men in the side, but do not enjoy similar success when they travel abroad.

Since the end of the 2011 ICC World Cup, Kohli has blossomed to become India’s mainstay in ODIs. He has taken on the mantle from players like Tendulkar and Rahul Dravid to become the dependable force in the line-up. He is only 24-years old and has already established himself among the best players in the world. This is why he is a class apart and numbers do reflect the true story.