Age, experience and players around Kohli similar to that of team under Tendulkar in 1999-2000.

Virat Kohli will captain India in the first Test against Australia in Brisbane on December 4. Take your mind back to 1999-2000, when Sachin Tendulkar led an Indian team Down Under. There are some similarities between that unit and Kohli’s challenge this time around. Nishad Pai Vaidya points out the similarities and the dissimilarities…

There is a sense of déjà vu as Virat Kohli gears up to lead India in the first Test against Australia at the Gabba, Brisbane. The 26-year-old will walk out with a side with only two batsmen with experience on the Australian wickets. Go back to 1999-2000, and you may find some similarities with Sachin Tendulkar’s team that ventured Down Under, with him being the only man having played Tests in Australia. Although, he is yet to unleash his best in the white flannels, Kohli is India’s best hope in Australia — like Tendulkar in 1999-2000.

There are some similarities between Tendulkar’s troupe in 1999 and Kohli’s upcoming challenge. Let us have a look:

The age factor: There are a few similarities between the two teams. Back in 1999, Tendulkar was also 26 years old and India’s best batsman.  Having made his debut in 1989, he had completed a decade at the highest level and established himself amongst the most dangerous batsmen. Kohli is already counted amongst the best in the world in the longer format and despite a dismal England tour, he has Test tons in each country he has played in barring West Indies and the British Isles.

As a captain, Tendulkar had to face enormous pressure in the sinking ship. Kohli will have the mantle of leadership off him when Dhoni gets back, but he has to carry the batting line-up with him.

Potential batting stars around them: In 1999, Tendulkar had led a potentially world-class batting unit to Australia, which featured Sourav Ganguly, Rahul Dravid and VVS Laxman. Ganguly, Dravid and Laxman had completed three years in Test cricket and were hungry to prove their mettle in all conditions. Much like Tendulkar, Kohli will have support from Cheteshwar Pujara, Ajinkya Rahane and Rohit Sharma — men who are considered the future of Indian batting. Pujara is in that Dravid-mould and will bat at No 3, with Kohli inheriting Tendulkar’s No 4 spot.

Ganguly and Dravid did not have a very good time then, but India discovered the magic of Laxman. Four years later, they returned stronger and posed a stiff challenge to Australia. Similarly, it may be a bit too much to expect instant results as the current Indian team is growing in Test cricket. Pujara, Rahane and Rohit may or may not do well, but if they last the test of time and make it to the next tour, they could well have an impact in Australia.

Lack of experience in the unit: Tendulkar was the only batsman who had played Tests in Australia in the side that travelled in 1999-2000. This time, Kohli is the only specialist batsman having played Tests, with Wriddhiman Saha, the wicketkeeper. When MS Dhoni returns, Saha will most likely be benched and that would mean India will continue to have a constant of two batsmen with previous experience in Australia.

Dissimilarities: Every comparison cannot be perfect of course. The biggest difference is that Kohli will only captain India in the first Test, unlike Tendulkar, who was the skipper for the whole series. As a captain, Tendulkar had to face enormous pressure in the sinking ship. For a major part of the series, he was the only batsman who posed any threat to Australia, until Laxman brought out his best at Sydney. Kohli will have the mantle of leadership off him when Dhoni gets back, but he has to carry the batting line-up with him.

Indian fans would hope there is another dissimilarity i.e. India emerge victorious and not whitewashed. In 1999-2000, Tendulkar could not prevent a 0-3 defeat. India have had a tough time overseas since 2011 and many feel the writing is on the wall. Glenn McGrath has already gone to town predicting a 4-0 victory for Australia. India have an uphill task, but not an impossible one. 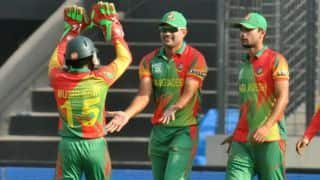