An insight into the RCB and the Indian Test captain's mind ahead of the big clash vs CSK.

It was a big day yesterday, and will be a big day tomorrow. I would be lying if I said that I am not intimidated by the prospect of facing Dhoni in Ranchi. As it is, he is a little pissed with me ever since I replaced him as India Test captain. We didn’t share good vibes after the World Cup semi-final too. Certainly, he will be raring to register a victory against me in front of a crowd that loves him like family.

There is a lot going in his favour.  The Ranchi wicket may assist spin and Chennai Super Kings are extremely strong in that department. Dhoni himself was out for a duck against Mumbai Indians, and knowing him, he would be raring to have a go at our bowlers. It’s been long since he has played a big knock in a big match, and he will be aiming to prove his ability as a match winner again. Another thing that goes in his favour is that he has led the side in such situations so many times, and his record has been good.

De Villiers pointed out that he had lost in the same stage against Kings XI Punjab last year. Thanks to Brendon McCullum’s moment of genius where he ran Raina out. Unfortunately or fortunately, McCullum is playing in England this time.

There could be great things from our side too. I just hope that either Gayle or AB have a good day. Youngsters like Mandeep and Sarfraz are showing promise, but I am not counting on them too much considering it is a high pressure game. I have told them to just express themselves and not worry too much about the occasion.

Anushka isn’t really making things better. She is moping about people not liking Bombay Velvet. God’s honest truth, I did not quite like the movie either. What was Anurag Kashyap thinking, casting Ranbir Kapoor as a tapori, and Johnny revealing Rita as Rosie’s twin so quickly? I mean, really are they so lame? Sigh. I hope Anushka doesn’t read this. I told her that I loved the movie.

Coming back to tomorrow’s match, I have played well in both matches against them this year, even though we lost both. I hope that I come good tomorrow too. Nothing beats the feeling of being a star in a big match. IPL 2015: Schedule with venue details

I have sent Raina, Jadeja, Mohit and Ashwin the same message — “Dhoni’s days as India captain is numbered. Yours aren’t. If you want to continue to wear the blue jersey, fail tomorrow!”  Haha. Not really. Just kidding. Raina and Jadeja would definitely have given me back.

I hope to play a good match. T20 is a format where luck can play a huge role. I really hope that it is my day tomorrow. If I win, I’ll take on Rohit’s Mumbai Indians. Otherwise, I will go on a long vacation with Anushka where both of us lick each other’s wounds. 😉 IPL 2015: Complete Coverage

PLEASE NOTE THAT THIS IS A WORK OF PURE FICTION. ANY RESEMBLANCE TO ANY CHARACTER, REAL OR OTHERWISE, IS PURELY COINCIDENTAL.

(Sameer Jha is a former employee of CricketCountry. He can be followed on Twitter at @SameerJha_) 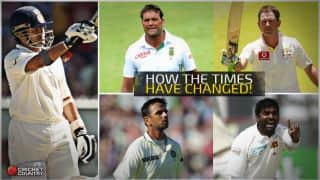