Virat Kohli’s genius, his bromance with MS Dhoni and Tom Latham, other photo and video highlights from Ind

New Zealand with a 6-wicket win have taken the lead by 1-0 in the three-match ODI series against India.

India had a new No.4 batsman. After Kedar Jadhav was dismissed cheaply at Wankhede Stadium, a friend called up. He said, You keep telling India can field four international sides but can t we find one No.4 from 1.3 billion? The number baffled me and I recalled it after the game. We are used to the term billion. Discussing population or Swiss bank accounts or the tycoons, the term never baffles us. But it s hardly heard far away, down in New Zealand.

It s a nation with four and half million humans, and 30 million sheep. It s another story that they were playing the first ODI of the three-match series in Mumbai where approximately twice their population travel on local trains daily.

With this paltry number and with most inclined towards rugby. What were the odds? India have the bench strength and recently whitewashed the A side of the Kiwis.

The heat was tough to beat. The mood was Virat Kohli. The crowd as hostile as ever. The chants varied from Sachin Sachin to Kohli Kohli to Dhoni Dhoni .

Amidst all the hullaballoo, the gentlemen from the unnoticeable world calmly beat the odds to go one up in the series. Yes, this is as big as it gets. New Zealand have beaten India, the same side that whitewashed Sri Lanka and almost did the same to Australia.

Now for some photo and video highlights:

Boult not from the blue

This man off to a hot start #indvnz pic.twitter.com/8vLLM2ZF54

Trent Boult is world class. He claimed a five-for in the warm-up game at Brabourne Stadium. He continued from there. Rohit Sharma, who spoke of the Boult-threat ahead of the game, succumbed to his weakness. Boult got one to slightly nip in to beat Rohit s heave. Earlier, he trapped Dhawan with extra bounce, making the southpaw nick to wicketkeeper s gloves.

Indian openers were back in the hut and Boult registered figures of 5-1-7-2 in his first spell. He was not over. He bowled at death, removed MS Dhoni and Hardik Pandya, and finished with 10-1-35-4. Boult was the difference between a 320 and 280 (that Indian eventually got.)

Wankhede welcomes the milestone man with the chants of KohliKohli#Virat200pic.twitter.com/Gaxcrv0nza

A cashier works in bank. He takes a bus to his office. Sits in the cash-counter. He counts notes and hands them over to the queued customers. He does it everyday. But are scoring centuries a routine job? If you are Kohli, yes.

Kohli walked out to cheers and that continued till the end. The Indian captain s consistency in this format is beyond the scope of adjectives. It was just another day for him. Playing his 200th ODI, he walked out and scored another hundred. Doing so, he took his tally to 31 and surpassed Ricky Ponting.

Now this six. Believe me. I have played the game at some level. These can t be smacked with this ridiculous ease.

The Dhoni romanticism extends the Ranchi and Chennai boundaries. It was at this venue six-and-half years ago when this man gave the city and the country one of its greatest celebratory moment.

Ravi Shastri’s scream, And Dhoni finishes off in style , reverberated around the nation. He walked in at No.6.

A standing ovation for @msdhoni as he walks into bat at the Wankhede Stadium #INDvNZpic.twitter.com/HCrcYLoiz8

Dhoni scored just 25 before being another Boult victim. However, he shared a crucial 57-run stand with Kohli. Dhoni s wicket proved to be the turning point. India were otherwise set for 310 at least.

What is the kind of relation that Dhoni and Kohli share? For some reason, this question intrigues many in the nation. Despite the grapevines the two apparently share a fantastic camaraderie. The video of their bromance broke the Internet on Sunday.

Kohli later said, Enjoyed watching him (Latham) bat. He has not played enough international cricket, so the credit goes to him.

His skills in terms of swinging the ball are amongst the best in the world. Bhuvneshwar Kumar has now learned the art of swinging the bat too. He was always a dependable lower-order batsman but the right-hander has added shots to his kitty. It was his 15-ball 26 at the death that lifted India to 280 for 8.

The first six that he smacked earned the bow his captain.

Dhoni is unparalleled in world cricket when it comes to keeping wickets against spin. However, the doubters suspect him against quality swing. The Indian wicketkeeper isn t known for his diving skills but Sunday was an exception. Here s a full stretch Dhoni dive to save four byes.

Last year when New Zealand toured India, Latham was your classical opener, who would buy his time and play straight. However, what caught the eye was his comfort with sweeping. He looked very sure with his head position while negating the spin threats. He had a good tour.

A year on, Latham comes back to India in a new avatar. At No. 5, he is New Zealand s wicketkeeper-batter. More of a busy player, who is expected to play the Dhoni kind of a role for New Zealand.

New Zealand are known for their smart moves. This indeed is one. Kiwis have added depth to their batting and they have also ensured that they have someone in the middle who can negotiate the Indian spin-threat with sweeps. Latham walked in at 80 for 3. The required rate had shot over six. He did not stop with sweeps.

He has added novelty in his armoury. There were smart reverse sweeps. He also played straight and cut very well. He had little problem with spin on a surface that eventually got better as the game progressed. The move proved to be a masterstroke.

A half-century for Tom Latham and 100 run partnership between he and Taylor. Brilliant so far #indvnz pic.twitter.com/vDkdsj9mrg

He and Ross Taylor completed a 200-run partnership to see New Zealand home. This happened to be their highest chase against India, and also the highest chase at this venue.

A great start to the series. Well batted @tomlatham2. Had the best seat in the house. #indnz #humid #200

Latham got to his fourth ODI hundred while Taylor departed five short of his, and when New Zealand required a run to win. They eventually did courtesy Henry Nicholls first ball-heave for a boundary. New Zealand won by six wickets. 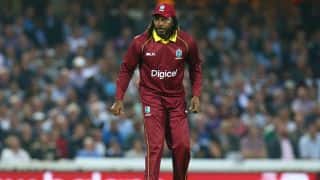 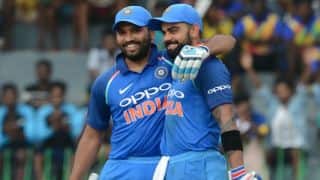