Virat Kohli becomes the second Indian batsman to get out hit-wicket at least once in both Tests and One-Dayers after Nayan Mongia.

The fourth day of the first Test between India and England at Saurashtra Cricket Association Stadium, Rajkot was a slow affair. India, who had scored 319 with the loss of four wickets till the end of third day’s play, lost their fifth wicket quite early on Day Four in the form of Ajinkya Rahane. Soon, skipper Kohli too got out in a bizarre way as he was out hit-wicket and became the second Indian captain to become the part of such unwanted record after Lala Amarnath. After the fall of Kohli’s wicket, Ravichandran Ashwin and Wriddhiman Saha added 64 runs for seventh wicket partnership.

Saha got out after scoring 35 but Ashwin kept on scoring from the other and registered his 7th Test fifty. He was the last man to get out from Indian side. Besides that, there was a little entertaining batting by Mohammed Shami as we got to see a six by him. India were bowled out for 488 and gave a handy lead of 49 runs to England. From England‘s bowling department, Adil Rashid scalped four wickets, most by any bowler from their side, while Moeen Ali and Zafar Ansari got two each. Coming to second innings of England, openers Alastair Cook and debutant Haseeb Hameed did an excellent job by adding 114 runs without losing any wicket. England now have a lead of 163. Let us have a look at the records registered during the day’s play.

114-run opening partnership between Alastair Cook and Haseeb Hameed first hundred run opening stand by visiting openers in India in the third innings of a Test since November 2012. In last such instance also came by England 123 runs for Nick Compton and Cook at Ahmedabad.

India failed to take the lead against England. Last such instance happened for India at home was also against England at Nagpur in December 2012. Also, the first after last 13 consecutive Tests at home.

Virat Kohli becomes the second Indian batsman to get out hit-wicket at least once in both Tests and One-Days after Nayan Mongia.

Kohli is also the 19th captain to get out hit-wicket and second Indian captain after Lala Amarnath.

22 hit-wickets by Indian players in Tests fourth most by any teams in Tests after England 36, West Indies 27 and Australia 23. 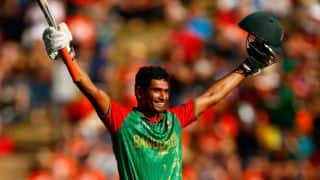