At Trent Bridge, the team responded to all the tough questions in emphatic style - a style befitting of the No 1 ranking.

There wasn t a jelly bean like incident in Nottingham this time around but India s resounding win at Trent Bridge felt as sweet as the one in 2007, possibly sweeter. Back then, after bad light and MS Dhoni s dogged fight stole a draw at Lord s, Rahul Dravid s men took a 1-0 lead in the three-match series in Nottingham, which India went on to win in England.

More than a decade and two embarrassing tours later (2011 and 2014), Virat Kohli s team travelled with almost everyone hopeful of some magic in store. The series in South Africa was lost, but the way the Indian bowling unit snapped up 60 wickets in three Tests was reason enough to be quietly confident in a five-match series, against an England team struggling with issues of their own.

However, the failure in Birmingham and the submission at Lord s was a rude awakening for everyone in and outside of the fraternity. How could the No 1 Test team get walloped in the fashion they did? Was it going to be another miserable five-match series? How would the batsmen, apart from Kohli of course, ever recover from the scars? Would the bowlers have any runs on the board to attack with?

At Trent Bridge, the team responded to those questions in emphatic style – a style befitting of the No 1 ranking. In the city of Robin Hood, they pulled of a heist. And one that was somewhat unexpected after the abject performance in the previous match.

The captain – who exorcised his own demons in the first Test – had put out an honest assessment after Lord s. He accepted the selection goof-up and admitted they were outplayed for the first time in five Tests. They didn t deserve to win, said Kohli, and he wasn t lying.

When you re painfully falling in to the abyss, a brutally honest chat with yourself in the mirror is a decent rescue strategy. It is as naked as you get and suddenly the reflection in the mirror has all the answers which eluded you previously. We might never find out the conversation each player had with his own conscience after the Lord s debacle, but we can be quite sure that it worked.

The batting, the bowling and wait for it even the slip catching, all stood up in this game. That a debutant wicketkeeper with not the best reputation for his glovework plucks an incredible five catches tells you a story of things falling in place. The story on the field was seen through 30 cameras but you can be sure a hell of a lot unfolded behind the scenes in the build-up to this Test.

Every character is different to another. I ve never played international cricket but I m sure the human psychology at most levels works on the same fundamental principles. From being a senior member of the team (imagine any team in a professional sphere) a season ago to now not being a guaranteed selection can play around with anyone s confidence.

Some excel at putting failures behind them and starting afresh where as others need help to do so. Their optimum potential is dependant on various factors, most importantly the mental space. Ajinkya Rahane and Cheteshwar Pujara were possibly feeling a little vulnerable and honestly, who could blame them?

But from the evidence on the field at Trent Bridge, it seems like this was addressed after the jolt at Lord s.

Rahane was described as the pillar of the team in an open, crucial pre-match press conference. And he once again looked the batsmen who was India s best bet in foreign condition till a few tours ago.

There was possibly a little something in the Virat-Pujara partnership too. The great Kapil Dev once told me that sometimes a captain who leads by example needs to take a step back and match his team s intensity level to succeed. There isn t a doubt that Virat is miles ahead of his contemporaries, within the team and around the world. Having put any doubts to rest about his own ability early in the series, Kohli seemed to have taken a step to enter Pujara s comfort zone in this test, rather than expecting it the other way round, in their 113-run partnership. Maybe these small things make a much greater difference.

Another turning point of the game was Hardik Pandya s stunning bowling effort. The great Kapil Dev remains a once-in-a lifetime cricketer. For most of his career he could ve been India s first name on the team sheet purely for his incredible swing bowling and athleticism. The batting, from being an added facet became an assured bail out for the team over a period of time. Hardik is India s fifth bowling option. There is no merit in ever comparing him to India s greatest ever allrounder.

The Hardik Pandya he wants to be showed his adaptability by bowling much fuller than his limited-overs lengths. That he could swing the ball at average speeds quicker than the English pacers was a delight. He is another of the clan which the management believes will find a way to contribute. And, why should the rope be shorter for a young allrounder as compared to a batsman or bowler?

Although the chatter on social media is usually to do with their mutual love for tattoos and haircuts but in Shikhar Dhawan, KL Rahul, Pandya and Pant, perhaps Virat sees a reflection of his own young self. Modern day millennials who love to Instagram their tattooed abs, but at the same time go all in in their effort on the cricket field. There s no chance you could be in Virat s squad if your not serious about your game and commitment towards the side. Every captain should believe in his ability to spot talent over statistics, and he must wait for the validation, but not beyond a point.

Purely on appearance, Virat himself looks ready to go on a stage with a double-neck guitar belting out heavy riffs. He is a full-blooded rockstar and he plays like one in coloured clothing. But he once again batted like a meditating monk, playing every ball with unbelievable intensity in his eyes.

His ego hasn t attended a single Test match since the 2016 home season. On commentary, Nasser Hussain was marvelling at how complete an effort he puts in for every delivery. And boy what a treat it is to watch Virat in whites. Here s a modern day poster boy who worships this format and it shows. If he cannot inspire the younger generations to devote themselves to this ultimate test in cricket, no one else can.

Despite the euphoria, they ve only won one game each in South Africa and now England. But it s the manner in which these two results have come which inspires confidence. The three-Test series in South Africa didn t give them a chance to carry that momentum to alter the end result, but the scheduling here in England does. Don Bradman s Australia remains the last team to win a series after going 0-2 down. Kohli s team has taken a massive leap in that direction. 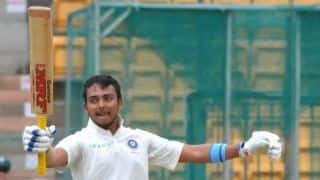