If Kohli's semi-final knock was spellbinding, the patience shown in the final shows how good a player he is.

If Virat Kohli’s spellbinding knock in the semi-final was the mark of genius, the innings he essayed in the final underlines his claims to greatness — writes Arunabha Sengupta.

The 44-ball 72 in the semi-final was an innings throbbing with talent and audacity, several flashes of genius that merged together into a glittering gem. The 58-ball 77 in the final was perhaps not as sparkling through its entire course. Indeed there were phases during which the ball did not quite hit the middle of the bat, the impeccable strategy of the Sri Lankans dried up the favourite areas of stroke-play and seemed to shackle his style.

Yet, if the magnificence in the semi-final underlined yet again that Virat Kohli was special, it was the knock in the final that stamped his claims to greatness.

International sports is seldom a cakewalk. There are occasions when the soaring form dips into the realms of mediocrity. The same arc of the bat, that on the best day sends balls screaming to the fence and brings spectators to their feet with intoxicated cheers, can sometimes find timing too awry to beat the circle. Not always will there be an abundance of balls bowled in one’s favourite areas. Sometimes, as on Sunday evening, the opposition bowlers can be incredibly accurate and choke the runs down to a trickle.

Every batsman comes up against these obstacles and the truly great find a way around them.

Kohli, on the night of the final, found it difficult to get going. There was one imperious stroke early on, the ball dismissed from the off-stump past the mid-on with a contemptuous whip of the wrists. But, the innings did not rev immediately on ignition. Kohli could not really blaze away in his signature manner from the start. The first 18 balls saw him move sedately to 13, the strokes lacked the customary crispness, the deceptive bowling had him in a spot of bother. One mistimed pull off Rangana Herath was put down at mid-wicket by Lasith Malinga.

And Kohli, aided by this slice of luck, managed to regain his touch.The challenge of Twenty20 cricket is that it is too brief, there is littletime for adjustment, for rediscovery, during the course of an innings. Yet,Kohli managed to turn things around within a few deliveries. The Lankans continued to bowl superbly, but Kohli had soon found the way to time the ball once again, to find the gaps, to again become the fearsome threat he always is with the willow.

Some boundaries were contrived, like the steer to third-man off Malinga. Some others were murderously executed, like the flat sixes down the ground or that thundering drive through the covers off Nuwan Kulasekara. In spite of his sluggish start, Kohli managed to race to his fifty in 43 balls and added a further 27 in the remaining 15.

Yes, India lost the match — and the focus understandably zeroed in on Yuvraj for his glacial 11 from 21 balls. However, there was plenty of silver lining for the Indians because at the other end, Kohli carvedout a fantastic new niche for himself.

On his day, Kohli is without doubt one of the best batsmen of the world. What he amply demonstrated during the final was that he can be almost as devastating even when off-colour. A rare gem indeed. 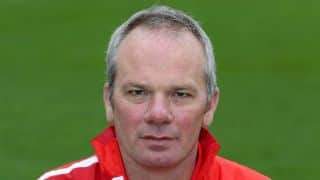