Another ODI series, another Virat Kohli domination, and though the tale has been the same many a time, the numbers keep changing.

The domination was completed at Centurion. India finished the series 5-1 in South Africa. Another ODI series, another Virat Kohli domination, and though the tale has been the same many a time, the numbers keep changing. For some the numbers only get better. Here are some interesting stats highlights from the sixth ODI:

India win five matches overseas: Only the second time have India won five ODIs in a series overseas. The first instance was in Zimbabwe in 2013, and Kohli was the stand-in captain.

MS Dhoni s joins elite club: South Africa lost their first wicket in the seventh over in form of Hashim Amla. Dhoni completed his 600th catch in international cricket. Mark Boucher (952) and Adam Gilchrist (813) are the only other wicketkeepers to have breached the mark.

Another century for Virat Kohli: No, this is not the 35th ODI ton we are talking about. We will come to that later. Kohli completed a catch at short cover off Jasprit Bumrah to dismiss Heinrich Klassen to bring up his 100th catch in ODIs.

AB de Villiers dry run: Yuzvendra Chahal knocked over his Royal Challengers Bangalore (RCB) teammate AB de Villiers for 30. ABD finished the series with scores of 26, 6 and 30. This is the first time since 2008 when AB hasn t played a fifty-plus knock in a bilateral series with three or more matches.

Kuldeep Yadav goes past Rashid Khan: Kuldeep needed three wickets to become the highest wicket-taker in a bilateral ODI series. He was tied on 16 wickets with Rashid Khan. He got only a wicket at Centurion. He is now tied in the second spot with 17 wickets alongside Patrick Patterson and Craig Matthew in a list topped by Javagal Srinath and Amit Mishra with 18 wickets each.

Now Kohli with the bat…

Most runs in a bilateral ODI contest: Kohli slammed his 35th hundred in ODIs and en route to the mark, he became the highest aggregator in a bilateral series.

Not only Kohli became the first cricketer to breach the 500-run mark in ODIs; he also became the only Indian to register three centuries in a bilateral event.

Tendulkar has played 57 innings against South Africa and Kohli has played just 24.

Going past Hashim Amla: In this ODI series, Kohli went past Amla to become the fifth most century-maker in international cricket. Tendulkar heads with 100, Ponting follows with 71, Sangakkara has 63, Kallis 62 and Kohli 56.

South Africa started the series as No.1 ODI side. India now lead the table with 122 rating, five units clear of South Africa, who are still at No.2

This is only the second time that South Africa have lost five ODIs in a bilateral series at home. The previous instance was against Australia in 2001-02 season. 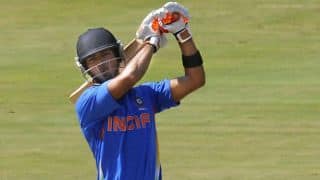 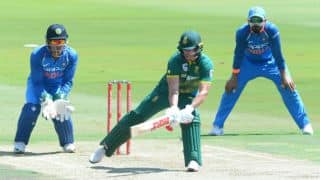