After a few back-to-back one-sided contests, Virat Kohli s India seem to have finally found a challenger in New Zealand.

After a few back-to-back one-sided contests, Virat Kohli s India seem to have finally found a challenger in New Zealand. Provided the fact that New Zealand are the fifth-ranked ODI side and India are flirting with the top spot, not many expected the Kiwis to stand up against the Indian challenge. However, as has always been the case throughout history, the gentlemen from the Southern Hemisphere proved to be more than the most likeable side in world cricket. They made the most of their limited resources, and on the day they turned out to be a bunch of composed individuals who gave it their all.

Virat Kohli s hundreds are becoming normal, said Kane Williamson. However, the hundred at Wankhede Stadium, Mumbai had many stories to tell as did New Zealand s spectacular win to go up 1-0.

Let us glance through the statistical highlights from this contest.

Special 31: Kohli s 31st ODI hundred was one of the best of his career. It was more special because he surpassed Ponting s tally. He is now only behind Tendulkar s special number 49. It needs to be mentioned that Kohli has taken 192 innings to reach the 31-mark. Tendulkar had taken 271.

Kohli leads a special bunch: Yuvraj Singh, Dhoni and Suresh Raina had made their 200th ODIs special by registering fifty-plus scores. Kohli became the fourth Indian to do so and he became the first Indian to register a hundred on 200thODI. In fact, the only other player to do so is AB de Villiers.

Kohli continues to lead a special bunch: Kohli s 121 is now the highest score in any cricketer s 200th ODI. He is followed by de Villiers (101*) and Brendon McCullum (85).

Kohli also became the 2nd Indian captain to slam a century in an ODI at Wankhede. Tendulkar s 114 against South Africa in 1996 was the first instance.

Trivia: The only other Indian centurion at this venue is Azhar. His 108* came against Sri Lanka in 1987. Gautam Gambhir missed the mark by three runs in the 2011 World Cup final.

Most ODI centuries at home? Sachin Tendulkar leads the list with 20. Kohli has reached the No. 2 spot. He is tied on 13 alongside Ponting and Hashim Amla.

Most centuries as captain? Speaking of most international centuries by captain, Ponting comfortably leads the list with 41 in 376 innings. He is followed by Smith s 33 in 368. Kohli is now joint-third. His 19 centuries have come from just 91 innings. Kohli is level with Michael Clarke and Brian Lara, who have batted 171 and 204 times respectively.

Trivia: Sehwag also top scored in the infamous 2002-03 ODI series in New Zealand where runs were hardy to come by. In fact, with 299 runs he almost scored 33 per cent of the team s runs in the series. The next best in the list was Stephen Fleming (157).

Phew Enough of Kohli for now

The 200-run stand: Ross Taylor and Tom Latham made the 281-run chase look ridiculously easy. This is now the highest stand by any visiting pair for any wicket in India. Earlier, Andrew Hall and Graeme Smith had put up an unbeaten 189 for the first wicket at Kolkata in 2005-06. It s also the joint 3rd-highest stand against India while chasing and New Zealand s highest stand in ODIs against India.

The newfound Latham: 470020. No, that is no zip code. Latham s miserable run with bat began earlier this year and he struggled against the visiting Australians and South Africans. Then he was appointed captain for the triangular tournament in Ireland. He found form there. He didn t find a place in the XI in the Champions Trophy. He now brought up his fourth ton in his new avatar as a wicketkeeper who bats in the middle order. Even Kohli said, We enjoyed his batting. Credit to him. The sequence now reads 54 104 84 103*. His batting average has now shot from high-20s to mid-30s.

Trivia: Ian Bell in 2012-13 at Dharamsala was the last batsman before Latham to score a century against India in a successful chase.

Ross Taylor s redemption: In 2016, Taylor had become a butt of jokes following his continuous struggle against Indian spinners. He may be one of the finest New Zealand batters ever but his numbers cut a sorry figure while touring India.

Taylor, who averages over 47 in Tests, has scored at just over 25 from 8 Tests in India. Heading to the Mumbai ODI, Taylor averaged just over 28 from 13 innings. One must remember that his ODI average has always hovered in the very impressive mid-40s. His 95 is his highest in India. Taylor s average too in India has crossed 33.

Record chase at Wankhede: Dhoni finishes off in style, Ravi Shastri had screamed in the commentary box when Dhoni with that blow won India the 2011 World Cup. India s successful 275-run chase was the highest at this venue till Sunday. We are not sure if Shastri would have screamed the same from the Indian dressing-room replacing Dhoni with Nichols ; however, it is now a fact that New Zealand have now registered the highest successful chase at Wankhede. 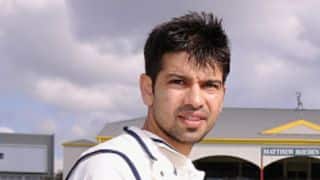