Royal Challengers Bangalore become the fourth team to qualify for the playoffs of IPL 2016.

Royal Challengers Bangalore (RCB) edge past Delhi Daredevils (DD) by 6 wickets and became the fourth team to qualify for the playoffs of Indian Premier League (IPL) 2016. It was yet again the RCB captain Virat Kohli who was in thick of the action, as he was adjudged Player of the Match for his sixth half-century of this year’s IPL extravaganza. However, it was the leggie Yuzvendra Chahal who put RCB in the driver’s seat with his spectacular three-for. All in all, it was a clinical performance by Kohli’s men, and they will lock horns with Gujarat Lions (GL) in Qualifier 1 at Bengaluru’s Chinnaswamy Stadium on May 24. Let’s have a look at the highlights of this beauty of a contest:

Another day, another Virat Kohli record: Kohli’s unbeaten 45-ball 54 helped him go past the 900-run mark in this season of IPL, which also makes him the first player to achieve this incredible feat in an IPL season. READ MORE: Royal Challengers Bangalore beat Delhi Daredevils by 6 wickets at Raipur, Stars and Flops

Yuzvendra Chahal earns Purple Cap: Chahal picked up three crucial wickets of Quinton de Kock, Karun Nair and Sanju Samson to RCB in a commanding position. In fact, it was his three-for that set up the game for his team and reach the playoffs.

RCB qualify for playoffs: RCB became the fourth team to reach the penultimate stage of IPL 9. They have 16 points to their name and will face GL in Qualifier 1 on Tuesday. Moreover, this is the second consecutive time that Kohli’s men have reached the playoffs. ALSO READ: IPL 2016, Match 56, Pick of the tweets: Delhi Daredevils vs Royal Challengers Bangalore at Raipur

Quinton de Kock provides impetus: DD’s man in-form de Kock ended the IPL campaign on a good note, as he plundered his third fifty this season to help DD score 138-runs on the scoreboard. Despite losing wickets at the other end, de Kock put price on his wicket and kept the scoreboard ticking.

Chris Morris plays a fiery cameo: Morris, in the death overs, took the RCB bowlers to the cleaners. His 18-ball 27 was studded with three powerful boundaries, which eventually gave his team a psychological advantage. 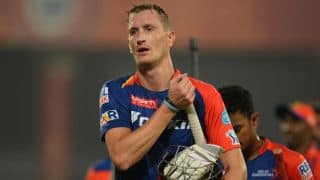