7 left handed batsman in England side most by any team to include in a Test against India.

The second Test of the five-match series between India and England was also the first played at Dr YS Rajasekhara Reddy ACA-VDCA Cricket Stadium, Visakhapatnam. After winning the toss, India opted to bat first against England with two changes in their side. Debutant Jayant Yadav replaced Amit Mishra, while KL Rahul came in for Gautam Gambhir. England also played with one surprise change, including James Anderson for Chris Woakes. Batting first, India did not had an impressive start as both the Indian openers KL Rahul and Murali Vijay went back to pavilion at the score of 22.

Virat Kohli and Cheteshwar Pujara then started their domination over England bowlers, adding 226 runs for the third wicket. Pujara went on to make his another Test ton but got out at 119. From the other end, Kohli remained unbeaten till the end of first day at 151. After the partnership between Kohli and Pujara got broken, Ajinkya Rahane departed as well, scoring only 23. From England, comeback man Anderson scalped 3 wickets, while Stuart Broad got 1. Overall, India dominated the entire first day of this Test and we present some interesting numbers from today’s contest.

Bradmanesque numbers for for Kohli: 137.50 Kohli’s average at Visakhapatnam across the formats. He has played a Test and 4 ODIs at the ground (his 399 ODI runs have come at 99.75).

Pujara’s love for new venues: India have played their last 3 Tests (including the ongoing one) at new venues Indore, Rajkot and Visakhapatnam. Pujara has scored a ton in each of these 3 Tests.

3,000 Test runs for both Pujara and Vijay Since Vijay was the first one to go past this landmark, so he became 20th Indian to do so, while Pujara became 21st Indian to enter this club.

Century in 50th Test for Kohli Kohli became the 6th Indian batsman to score a ton in his 50th Test after Umrigar, Gavaskar, Gundappa Viswanath, Kapil Dev and VVS Laxman. 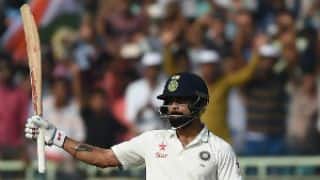