At this stage, however, Virat wants to focus in the next three Ranji Trophy fixtures.

Starting from MS Dhoni, Jharkhand cricket has produced street-smart cricketers like Saurabh Tiwary, Ishank Jaggi, Shahbaz Nadeem and Varun Aaron. The next addition to this list is Virat Singh, a 17-year old southpaw from Jamshedpur who recently grabbed eyeballs with his performances in domestic cricket. Sandipan Banerjee talks with him and finds out more about this youngster.

Recall the 2007-08 ICC Under-19 World Cup, in Kuala Lumpur when a young man from Delhi called Virat had led India to the title. After eight years, he is the India’s Test captain and finest batsman. Several other contemporary Indian cricketers like Suresh Raina, Ravindra Jadeja and Shikhar Dhawan have come through the ranks after brilliant performances in Under-19 World Cups. Another Virat, this time from Jharkhand, is willing to go through this tried and tested route.

Virat belongs from a family which has a cricket background. Apart from Virat himself, his two other brothers also represented Jharkhand in cricket. Virat made his debut for Jharkhand in List A cricket last season, but the ongoing 2014-15 domestic season has been more fruitful for him. Representing East Zone, he made a crucial 54 in the Deodhar Trophy final. He scored his maiden Ranji Trophy hundred in his second First-Class match on a difficult track at Dhanbad, earning accolades from all and sundry.

Talking to CricketCountry, Virat Singh sounded optimistic about his career and future plans. “This season has been quite good for me. I have made runs in both Vijay Hazare Trophy and Ranji Trophy. So I am quite confident about getting selected for the upcoming India Under-19 tours. If I can score on those tours, I might be considered for next year’s Under-19 World Cup in Bangladesh. This is my immediate goal.”

At this stage, however, Virat wants to focus in the next three Ranji Trophy fixtures. “These three games will be very crucial for me and my team. I want to continue my good form and score runs for my team.” Virat represents a state from which MS Dhoni hails. He met Dhoni at Ranchi last year. Recalling that meeting, an excited Virat said: “Recently, when Dhoni-Bhaiya was in Ranchi, he came to the ground. At that time I was batting at the nets. He saw my batting and gave some tips about playing spin, especially when a bowler is bowling at the rough. We chatted for almost an hour. That was a nice learning session for me.”

At this age, batting at No. 3 in First-Class cricket is not an easy ask, but Virat looks upon it as a challenge. In his words, he “loves to face the new ball”. Even at this stage he is willing to play county cricket to brush up his batting skills in the seaming and swinging conditions of England.

Apart from playing, Virat is also keen follower of international cricket. Whenever he gets time he watches televised cricket matches. Talking about this, he said, “I am a huge fan of Michael Hussey. I especially like the way he plays his cover drive.  He is a complete cricketer.”  Amongst Indian cricketers he likes Suresh Raina’s batting in the limited-overs cricket. But, unlike Raina, whose Test record remains far from wanting, Virat wants to be recognised as a cricketer who can excel in all forms of cricket. 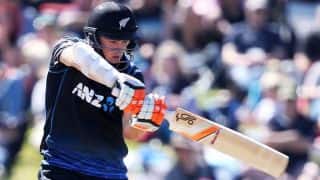 Brett Lee announces retirement from all forms of cricket