Out of the Indian team, his central contract revoked, abysmal performance in the domestic matches, Virender Sehwag is probably going through the worst phase of his career.

Out of the Indian team, his central contract revoked, abysmal performance in the domestic matches, Virender Sehwag is probably going through the worst phase of his career. Arunabha Sengupta wonders if there is a way for him to get back in the reckoning.

When the Nuke from Najafgarh celebrated his 34th birthday in October 2012, this writer had voiced: “Sadly, to certain entertainers characterised by their eternal zest, the landmark of a year gone by is often unkind. Virender Sehwag, one of the most thrilling batsmen to walk the planet, falls in this category. The weight of advancing years may be too heavy a burden for the free spirit that has so far lent spark to his batting.”

Sehwag has grown a year and several days older, and the apprehensions have taken on the uneasy form of unwanted reality.

The thundering deeds of Sehwag’s willow have gradually faded into feats of the past. That bazooka of a bat used to blast the opposition into various states of shell-shocked surrender. Now, it misfires way too often.

Sehwag is facing the worst crisis in his career. He has lost his place in the Indian team. His experience has not been sufficient to outweigh poor form in getting him selected for a gruellingly difficult tour of South Africa. His central contract has been revoked by the board.

In the domestic circuit, his form has been abysmal this season, with 69 runs at 13.80 from three outings in Ranji Trophy, and 45 from two innings against West Indies A — a total of 114 runs at 16.29 in First-Class cricket. In the shorter format, the results haven’t been much better with 72 runs in three innings in the NKP Salve Challenger Trophy.

The awe lingers on. Sehwag continues to reign as one of the most exciting batsmen to have played the game, someone who revolutionised Test match batting. But, the miserable fact is that since the Englishmen were here last winter, he has scored 280 runs in six Tests at 28.00. As many of 117 of those runs had come in one solitary innings against England, when there were transient, hopeful glimpses of his near best. From that point onwards it has been an incredible slide. Even the use of eyeglasses has not helped.

The decay has not really been a phenomenon of the past year. It started three years ago, with India touring South Africa — the very land where his bat had got off to that reverberating start in 2001-02. In 2010-11, Sehwag had limped through the three Tests against the Proteas, scoring 144 runs at 24.00. He had just turned 32, and there were the early indications that the vim and vigour of his intentions were not being so readily translated into runs. His powers were starting to dwindle with the fraying magic of his slightly slower hands and slightly older eyes.

Starting with that South African tour, Sehwag has managed 1036 runs in 20 Tests at 28.77, with that one hundred against England being the only bright spot in the last three years. What is alarming is that the runs have hurtled at that phenomenal rate of 82.68 per 100 balls. It is in fact even faster than his career strike rate of 82.23, in spite of the accompanying average that has nose-dived. It points to the fact that in spite of advancing years and depleting returns, Sehwag has not been prepared to modify the way he has always gone about making runs.

The reaction time has grown that fraction of a second longer, the opponents have added more weapons in their arsenal, and some specifically manufactured to counter his initial charge. However, Sehwag has continued to replicate the methods of mayhem that had earned immense returns when he was a younger man, with the quickness of the eye and the magic of his hands compensating for all the technical glitches of his batting. With each passing year, the net results have been negative — miserably so.

Has it been a tale of resting on laurels? Of a stubborn conviction that the flame kindled by a fiery bat in its prime will continue to burn with the same brightness even if the machinery is not fine-tuned?

One solitary incident during this period certainly supports the above hypothesis.

After the dismal outing in South Africa, Sehwag started the 2011 World Cup campaign with a bang, hitting 175 against Bangladesh. However, in the rest of the tournament, his only score of note was the 73 against South Africa at Nagpur. He ended with a duck in the triumphant final.

Following the World Cup, Sehwag was plagued by injuries, through which he played all the matches for Delhi Daredevils in the Indian Premier League (IPL). He did so with the commendable gusto that seems to accompany all professional cricketers appearing in this flagship commercial tournament.

As a result, he did enough damage to himself to miss the tour of West Indies and the first two Tests in England. However, it was what happened after he reached England that seems symbolic of the Sehwag approach we have seen in the last few years.

He arrived in the country without having played a First-Class game in seven months. In a two-day match against Northamptonshire, he lasted just 25 balls while scoring eight. And he walked straight into the Birmingham Test.

The first ball he faced was a screamer from Stuart Broad. It took his glove on the way to the ’keeper. In the second innings, the first ball was from Jimmy Anderson, short and with a bit of width. Sehwag stood there and swatted at it. With 26 balls and eight runs of First-Class cricket behind him in the previous seven months, he backed himself to stand rooted to his crease and drive on the up. At his peak, the ball would have probably gone screaming to the fence. In the rather seaming conditions of Edgbaston, it took a thick edge of his rusty willow and travelled benignly to Andrew Strauss at first slip. Sehwag bagged a King’s Pair.

The result was expected. No batsman, however great, can expect to come back to First-Class cricket after a long layoff, walk into a Test match and go hammer and tongs from the first ball, especially against top class bowling in difficult conditions. Accustomed to a continuous run of success for the last couple of years, Sehwag seemed to believe that he could do just that. Test cricket is not that simple.

One of the fascinating features of Test cricket is the way top performers stay ahead of the game, by adjusting their own style of play to combat the ever changing stratagems of the opposition, by filling out the chinks and crevices that creep into their own techniques and by taking steps to smoothen the wrinkles caused by age. The last few years have been testimony to Sehwag’s adamant refusal to modify his batting — in spite of the diminishing returns.

It is obviously an asset to have an uncluttered mind. During his incredible peak, Sehwag’s simplicity of approach was lionised, projected as the superpower of this super-batsman. However, if one is caught in the trap of that same simplicity, and thereby falls prey to inflexibility, it does become a cause for concern.

Among the bunch of exceptional batsmen around whom the fortunes of India were built in the first decade of this century, Sehwag was the youngest by some years. And in terms of age, he has shown signs of decline way before the others. That was predictable. His game was that of young hands and bright eyes, heavily reliant on the pulsating heart and the flowing warm blood of youth. It could withstand the loss of hair, but it was difficult to weather the passing of years.

The peaks touched by Sehwag are already magnificent, and the most fascinating of his feats is managing to score at a strike rate of 82.23, while averaging nearly 50.

Only four batsmen in the entire history of Test cricket have ever scored at a strike rate over 80, while at the same time boasting an average of over 20. Among them, Sehwag’s strike rate is second only to Shahid Afridi’s 86.97. His batting average is also superior to the others, and only Adam Gilchrist comes close to matching his phenomenal strike rate and average combination. Incredibly, Sehwag has hit a boundary or a six in every eight balls that he has faced in Test matches.

Among regular openers in the history of Test cricket, the one who comes closest is the legendary Victor Trumper, whose strike rate can be estimated to be somewhere between 67 and 68. Trumper scored his runs at 39 per innings, which is more than decent for the era he played in (1899-1912)

In the modern era, Sanath Jayasuriya managed an average of 40, and is remembered for scoring at a breathtaking rate. Yet his strike rate stands at 65.2. And for all his buccaneering approach, Krishnamachari Srikkanth did not score faster than 65 runs per 100 balls, while his average was an unremarkable 29.Tillakaratne Dilshan, the other modern slam-bang opener, scored just a bit faster, at a strike rate of 66.

Of the other names with the highest strike-rates, Jimmy Sinclair, Kapil Dev and Maurice Tate were all-rounders rather than specialist batsmen. And that the famed destroyer of all bowling, Viv Richards, ended with an average slightly more than what Sehwag boasts now, while scoring at 69.28 runs per hundred balls.

In the light of such numbers, Sehwag’s achievements are indeed incredible. But, within this tale of breakneck speed lie figures of warning.

We can perhaps ignore Trumper, Sinclair and Tate from the distant past when the game was radically different. Among the others, Shahid Afridi has not turned 35 yet. Kapil Dev played only three innings in Test cricket after turning 35 and Srikkanth had long retired by the time he reached that age.

The meaningful numbers can be provided only by Richards, Gilchrist, Dilshan and Jayasuriya.

As we can see, none of these hard hitters tempered their aggression as they aged. If anything, Gilchrist turned even more attacking while the rest maintained more or less the same strike rate. And all four suffered drastic drops in their batting average.

The average of the 35-plus Gilchrist is 10 runs below his career average.

Dilshan and Jayasuriya also saw their averages plummet by several points after celebrating that landmark birthday.

Hence, if there is any lesson in these figures, it is that Sehwag needs to temper his approach, slow down and modify his methods to suit his years. He may still find a new lease of life as a compiler of runs, than a blaster.

On the occasion of his turning 34, this writer had written, “Some serious soul-searching on this birthday could go a long way in prolonging his excellent career.” A year and two months have passed since then, and the cause for retrospection has grown more urgent. With youngsters in the team on the verge of settling down, time is busy running out for this great Indian opening batsman.

For long, Sehwag has delighted us with the innocence and purity of his strokeplay. Perhaps one can hope to be pleasantly surprised by a belated phase of maturity, a final saga of a few innings when the bludgeoning blade will flash with a glint of wisdom. 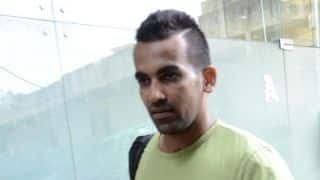