Despite the greatness of contemporaries like Chappell, Gavaskar, and Miandad, Richards’ impact was the most.

Eye-witnesses often swear by Viv Richards. For them, he was the most menacing batsman of his era, and for many the greatest since Don Bradman. Abhishek Mukherjee analyses his performances against quality pace.

There was a reason they referred to Viv Richards as King. The swagger to the crease, the calm, ruthless machismo with the bat in hand, biceps bulging from shirts too tight to contain them, a glare that often sent a chill down the spine of the bowler, the rhythmic, waiting chewing of the gum — they all killed the bowler psychologically even before the first ball was delivered. The battle was half won by the time he started the run-up.

Richards was special, and that is an understatement. Despite the greatness of his contemporaries (Greg Chappell, Sunil Gavaskar, and Javed Miandad, to name three) Richards’ impact has been the most. None of the others intimidated bowlers to the extent King Viv did: it needs an eye-witness to describe his feats.

A question commonly asked by fans, however, is: how good was Viv against fast bowling? Was he as good when it came to handling a pace battery consisting of four fast bowlers the way his contemporaries had to? How would he have fared against the likes of Andy Roberts, Michael Holding, Joel Garner, Colin Croft, and most significantly, Malcolm Marshall?

Let us find out. After all, he did take him on at domestic level.

Against the fast bowlers

[Note: Some of these matches were played against touring sides.]

That does not look too encouraging, does it? But then, how had Richards’ contemporaries fared in West Indies against their fearsome fast bowlers? Let us go through this excellent research from Arunabha Sengupta for further details. Here is a list of batsmen against West Indies in West Indies:

Richards’ numbers does not look impressive compared to some others. It is to be noted that Richards almost never faced four quality fast bowlers in the same match, which is something these men had to. Mohinder Amarnath, who seldom got a taste of a fast bowler (let alone four) or bouncy tracks in his home conditions, deserves a special mention here.

Talking of fast bowlers, let us check Richards’ numbers against each opposition:

[Note: Vanburn Holder, despite being a top-notch performer, was fast-medium.]

Trinidad and Tobago seems to be the only opposition against whom Richards had thrived. It is to be remembered that Andy Roberts, Eldine Baptiste, Winston Benjamin, and Curtly Ambrose were his teammates, which meant that he was spared at least four men. He did not have a good time against Barbados and Jamaica, which have traditionally been the breeding grounds of Caribbean fast bowlers.

Bernard Julien, Tony Gray, and Ian Bishop were fantastic bowlers for Trinidad and Tobago, but there was a catch: Julien’s First-Class career ended in 1982; Gray’s career lasted from 1983 to 1995; and Bishop’s from 1986 to 1999. Unfortunately, both Gray and Bishop were extremely injury-prone, and did not have very long careers in West Indian domestic circuit — but they were still as menacing as any fast bowling pair.

Let us consider another parameter, then: how did Richards perform against the West Indian sides at their dens? Richards had played 25 away First-Class matches on West Indian soil: let us do a match-by-match break-up (the bowlers mentioned above — let us call these “star” bowlers — are marked in red).

Indeed, barring the 124 and 45* against Garner at Kensington Oval, Richards has seldom played a quality innings with even one “star” bowler at their den. His other hundred, 168*, came against two seamers who were not quite regarded as “stars.”

Let us now do a break-up of Richards’ away career on West Indian soil:

But then, there was the County Championship in England (where he had always thrived — albeit under different conditions), where Richards scored 17,548 runs for Somerset and Glamorgan at 49.43 with 55 hundreds. But the question remains: did he ever have to play four, even three, or even two West Indian fast bowlers at the same time, even in the Championship?

Let us check the counties the “star” seamers played for:

The only seasons when two West Indian fast bowlers played for the same county were:

– 1989, when Holding and Bishop both played for Derbyshire. Richards did not play that season.

– 1989, when Davis and Ambrose both played for Northamptonshire. Richards did not play that season.

– 1990, when Davis and Ambrose both played for Northamptonshire. Richards played one match against them that season, in which Davis did not play.

There is no real need to elaborate any further. The numbers do the talking.

(Abhishek Mukherjee is the Editor and Cricket Historian at CricketCountry. He blogs here and can be followed on Twitter here) 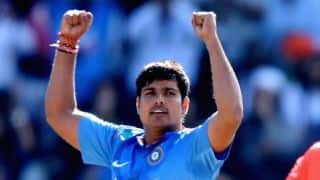 India A vs Sri Lankans tour match: Players look to make the most of opportunities