When Sachin talked about the All-Stars League, I felt an excitement that I had not experienced in a couple of years, says VVS Laxman.

I have been to the United States of America a few times, and even to play cricket once as captain of the India A squad in Los Angeles in the late 1990s, but if anyone had told me even six months back that I would be back in the USA to play cricket, that too in the Twenty20 format and even more astonishingly in a baseball stadium, I would have looked at him in total disbelief.

And yet, here we are, a week after the last of three matches of the Cricket All-Stars League, matches that were played in New York, Houston and Los Angeles in baseball stadiums that, with their unique shapes, provided a whole new dimension to our cricketing experience.

When Sachin talked about the All-Stars League, I felt an excitement that I had not experienced in a couple of years. I hadn’t held a cricket bat since December 2012 — okay, I had been a coach, taught technique, given catching practice etc, but I had not batted seriously for quite a while; but when Sachin asked me to play in the series, I immediately said yes. I was thrilled at the prospect of catching up with some of the all time greats (though retired from active international cricket), men against whom I had done battle at the top level but many of whom I would now be sharing a dressing room with.

As the names rolled off Sachin’s tongue, I grew increasingly excited. It was too tempting an offer to pass up, and suddenly, the butterflies started fluttering in the stomach. Agreed, it was three exhibition games involving players retired from international cricket, but I knew that there was too much pride in the group for the players not to take the matches seriously.

Like most others, I also got down to work after receiving Sachin’s call. I had five sessions of batting, including one with the Hyderabad Ranji Trophy team, to not just get the feel of bat on ball and to regain muscle memory, but also to see how the old troublesome back would hold up. I did have some discomfort initially, but the trainer at my academy did excellent work to ensure that my back wouldn’t come in the way of my presence at what in the end turned out to be an electric 10 days in the USA.

I joined the teams late in New York. I had some issues with my visa and only got into New York late night before the first game. By then, the rest of the guys had been there for two or three days, giving the series the boost it required in a land where cricket isn’t necessarily the most popular or widely followed sport. There were interviews galore, cricket suddenly appeared in respected American newspapers, and four players went to NASDAQ on Wall Street, Sachin and Shane Warne even ringing the bell to signal the start of business transactions.

It was nearly midnight when I finally reached New York on the eve of the first match, and though I hit the bed immediately, jetlag kicked in and I was up at 4.00 AM. The match was an afternoon game, 1.00 PM start, and by the time we reached the ground, I hadn’t managed to catch a further wink of sleep. But as soon as we reached the stadium, all the weariness and sleep disappeared. The atmosphere was as raucous as I have experienced anywhere in the world, the Indian tri-colour a regular feature in the stands that were packed to the rafters.

One of the things I have been asked about is the purpose of these matches, given the audience is going to be mostly Indian and from the subcontinent. There is merit to that question, but it must be kept in mind that Rome was not built in a day. The idea is to gradually get local Americans get hooked to cricket, and that will not be an overnight process. For that, we need to get cricket into schools, which is eventually one of the aspirations of the All-Stars League. Until then, if we can keep the Asian population interested, it will be a step in the right direction.

Tried my hand at Baseball at the LA Dodgers stadium.Loved it till I almost killed the guy behind me pic.twitter.com/wxJvoU4yqK

The big danger of schools not including cricket in their sporting curriculum in the United States is that even young Asian kids will have no exposure to the sport. By the same token, if schools embrace cricket even at a very small scale initially, it will mean the young American boys and girls also will be exposed to it. That there are a few similarities between baseball and cricket might appeal to the Americans. It is an ambitious dream, but what is life without a dream? For now, we are committed to trying to help the American national cricket team, and if they taste success, that will go a long way towards raising the profile of the sport in that country.

Coming back to the matches, as I said earlier, the buzz in New York was something else, and it was something we experienced at the other two venues as well. While the baseball fields meant there was not a uniform grass cover on the outfield, with some muddy areas thrown in, the pitches played really well. That was a welcome development, because when we played Australia A in Los Angeles, the tracks were so substandard that we decided to dispense with a new ball to avoid injuries, playing right throughout the five matches with an older ball.

As I had anticipated, while the match had exhibition status, there was no shortage of pride. It was obvious that several of the guys had worked really hard in the preparatory phase. I know for a fact that Sachin lost weight and worked seriously on his batting at Bandra-Kurla Complex in Mumbai. Wasim Akram ran 7-8 kilometres a day for nearly a month to regain fitness, and despite his commentary stint in India, Shaun Pollock found time to keep himself fit and in touch with bowling. These are just examples, it was apparent from the beginning that no one wanted to just turn up and bat or bowl, that no one wanted to be embarrassed.

After a long time, I experienced the unpleasantness that comes with being dismissed in a cricket match. I suppose whether it is a Test match or a ‘golden oldies’ contest, no batsman likes to get out, and I was disappointed and upset when I was stumped off Warne in the first game. When I exchanged notes in the dressing room, I realised that I had Sachin and Brian Lara, among others, for company — they too had hated getting out. I suppose you can take competition out of a sportsperson, but you can’t take the competitiveness out of him.

One of the highlights for me was the clinic we ran for school kids at the three hosting cities the day before the match. Nearly 150 kids turned up for the one-and-a-half-hour session in New York, Houston and Los Angeles apiece, all of them under 15 years of age. Understandably, a majority of them were Asians, but there were also some American lads among them, which gladdened me a great deal. I thoroughly enjoyed my interactions with the kids, and was impressed with their questions and their curiosity to know more and more about the nuances of the game.3

In my short stay there, I also realised that the interest of the average American in cricket had been piqued. Obviously, their Asian friends could not stop taking about Sachin and Wasim and Viru, so the locals wanted to know what all the fuss was about. They too asked questions, surfed the internet and made themselves a part of the entire experience. Now, if that isn’t an encouraging development, then I don’t know what is.

All in all, it was a tour to remember, a one-of-a-kind outing that, by the looks of it, will quickly be joined by series in other non-traditional cricketing nations — Singapore and Malaysia among them. America has set the benchmark, the challenge for us now will be to stay fit, and put on a show that will make non-cricket fan bases in other nations sit up and take notice. 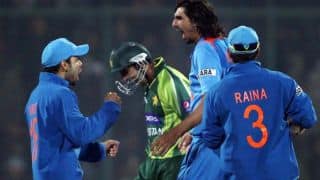