A five-Test series allows you the opportunity to get used to the conditions, especially if you are touring like England are: VVS Laxman

The latest edition of the India–England rivalry is upon us, and this is the first time since 1984-85 that England will be playing a five-Test series in India. A five-Test series is hugely different from a three-Test series, and while that is a fairly obvious statement, the demands it places on skill, on physical endurance, on mental resolve and on the character of an individual and a team just cannot be overstated. I say that from experience, having myself been part of two five-Test series, both in the Caribbean, in 1997 and then in 2002. Full Cricket Scorecard: India vs England 1st Test at Rajkot

In a three-Test series, a team that starts badly has very little scope to bounce back. We have seen often that once teams lose the first Test, they are desperate to wend their way back, which can then lead to mistakes. It is not without reason that in the history of Test cricket, there have only been four instances of teams bouncing back from 0-1 down to win a three-match series. Especially with no practice matches between Tests in this era of compressed tours, it is almost impossible to rediscover form if you do not start well, so from that point of view, the bounce back-abilities in three-Test showdowns are not always the norm.

A five-Test series, by contrast, allows you the opportunity to get used to the conditions, especially if you are touring like England are. The series will run the course of a month and more, which means there is plenty of time to spring back from a setback, there is little reason to panic if you have not begun well. It is difficult for one team to ride roughshod over the other unless there is a massive gulf in class between the two sides, and for all the predictions of a 5-0 Indian sweep in various quarters, I do not think it would be quite as straightforward as that.

In saying that, a five-Test series will definitely test one s cricketing skills immensely, particularly if there are technical inadequacies on which a player has very little time to work. You could say that in a way, the fact that we had five Tests in England in 2014 magnified the problems Virat Kohli had against the ball swinging away from him, and the problems Cheteshwar Pujara had against the ball coming back into him.

A five-Test series will test your skills like any game of cricket will, but often the individuals and the teams that are stronger in mind and body are the ones that will carry the day. If you are strong enough mentally to go with the game to boot, of course then either you have the fortitude to overcome bad form, or have the focus to make sure that you extend your good form as deep as possible. Physically, you have to be at your fittest as you travel from one city to another, sometimes spending unforgiving hours on the park if the team that is batting gets on a roll.

I particularly feel that because it is a five-Test series, it could level the playing field for England. I am aware that they did not have the best tour of Bangladesh, winning a tight first Test and then well beaten in the second, but I believe England were not ideally prepared for subcontinental conditions, coming straight off a Test and an ODI series at home against Pakistan. In Bangladesh, they were caught short by lack of preparation and unfamiliar conditions. But having spent three weeks in Bangladesh and then a week since their arrival in India, they are in a better position to not just understand what to expect, but also to be equipped to handle whatever might be thrown at them.

In a lot of ways, how England go will depend on the first Test, and I do not mean only from a result perspective. I will be more interested in what mindset England bring to the table. If they consider the first Test as an extension of the Bangladesh series and therefore start with negativity, then they could be in for a long, difficult tour. If they wipe the slate clean and begin afresh, they have the resources to do battle with India on an equal footing, because there is no lack of talent in their ranks.

Alastair Cook and Joe Root will be the obvious lynchpins of the England batting, and if one of them gets a big score in the first Test and if collectively they can post a decent total then the gremlins of self-doubt waiting to germinate will be comprehensively exploded. Alongside Virat, Kane Williamson and Steve Smith, Root is one of the top batsmen in the world at the moment, and when he gets on a roll, he is as unlikely to get satisfied as Cook is. These two men provide the experience and the class, but equally crucial will be the spin of Moeen Ali, the stubbornness of Jonny Bairstow, and the X-factor that Ben Stokes and Jos Buttler bring with them.

I think Stokes and Buttler could have a big say in how things pan out. Both are naturally aggressive batsmen who can take the attack to the bowling, and they are fearless. Stokes provides the crucial left-handed angle while Buttler might be seen as a gamble, but if he does come good, then the damage he can do is immense. England cannot afford to be timid and sit back for the Indian bowlers to call the shots; they must take attack to the Indian bowling without embracing recklessness. It is important for England s batsmen to play their natural game, and while they will understandably look to Cook and Root to lead the way, I feel Stokes and Buttler will be no less important in the overall scheme of things.

When England was here last, it took one sensational innings from Kevin Pietersen in Mumbai to turn the series on its head. Even admitting that KP is a special player and that it will not be realistic to expect someone to reprise an innings of that quality and magnitude, England have the batsmen with a similar mindset. The test for them would be whether they will go with that mindset and not get mired in a sea of negativity and the fear of failure.

It is England s bowling, however, that I am not too taken in by. While they have wonderful purveyors of the art of reverse swing Stokes, Stuart Broad, and Jake Ball, apart from James Anderson who was such an influential figure on their last tour of India I am not too convinced about the depth and quality of their spin resources. Moeen is a fairly competent bowler, but I have my doubts whether Adil Rashid and Gareth Batty can be consistently probing and accurate. Even in Bangladesh, England s spinners were going at nearly four an over; India s batsmen are more experienced at playing spin, and will be even more ruthless.

I agree that India gifted away a lot of wickets to Moeen on the last tour of England, but I put that down to complacency more than anything else. This time around, I am sure they will treat him with the respect he deserves, though I cannot see them being overcautious. But Rashid and Batty or whoever is the support spinning cast is will have to do the bulk of the bowling because I expect England will use their fast bowlers in sharp, incisive bursts in a bid to look for wickets. If the spinners cannot keep things quiet, then the pacemen too will start to become defensive. That will not help the cause of England whatsoever.

India have been hit by a spate of injuries in the recent past, but there is enough depth, class and quality to overcome the loss of some key players. I am not sure what the deliberations within the think-tank have been, but I would like to see India play with five batsmen, Ashwin at 6 followed by Saha and Jadeja, with Hardik Pandya at 9, Amit Mishra at 10 and Shami at 11.

I think Pandya s is a wonderful selection. He has come on by leaps and bounds as a bowler, and consistently clocked upwards of 140 kmph in the ODI series against New Zealand. In India, all-round skill-sets are reasonably rare, and I believe Pandya has the skill-set to become a good all-rounder in time to come. He is an explosive batsman and a wonderful fielder too. If he is groomed and nurtured properly, and is given the confidence to blossom as I am sure he will be by Virat and Anil, it can only be good for Indian cricket because it will give the side multiple options in different conditions.

Playing five bowlers will mean an additional option for Virat. Mishra was excellent during the one-day series against New Zealand, and his rhythm and confidence are both high. A wrist-spinner is always an asset, and Mishra s presence means India will have a very versatile spin attack. Also, it means Virat will not need to rely on a part-time option in Murali Vijay like he did in the Indore Test against New Zealand.

Vijay bowled seven overs during the New Zealand first innings, and while he did not bowl badly, the pressure required to be imposed at one end was not sustained. If you have a fifth specialist bowling choice, then there will be no let-up in either intensity or quality, which is what you need as you aim to win Tests.

Speaking of Vijay, I am sure he would love to convert some of his starts into big hundreds. While he has been India s most consistent Test opener for three years now, the competition for opening slots is hotting up. Shikhar Dhawan and KL Rahul will be back in contention when they are fit, and Gautam Gambhir will welcome another opportunity to show that he is still a big force at the top level. India have traditionally done well at home when they have had a big first-innings total, and I am sure Vijay is mindful that he has a massive role to play in ensuring that the big totals are achieved.

As top teams do, they will focus more on themselves than on the opposition. There will be strategies and game plans, as there must be, but Virat and Anil will look at areas where India can get better. The great sides are those that bother less about the opposition and concentrate more on their skills, their strengths, and how to maximise those strengths. India have the advantage of home conditions, great confidence, a somewhat hesitant opposition, and plenty of quality to fall back on. While England have the potential to run them close, if India play the kind of cricket they are capable of, I cannot see England stopping them.

Adding further spice is the use of DRS in a Test series in India for the first time. We have been told that the technology has been upgraded, that this system is better than the one in existence. How foolproof or otherwise it is, only time will tell. 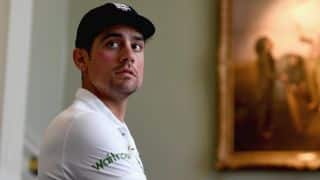