I am of the strong belief that having returned to the No. 1 position, all the ingredients are in place for Team India to stay at the helm for a long time, writes VVS Laxman.

Virat Kohli and his men can put their feet up, sit back and reflect on a job well done following their clean sweep against New Zealand. The margins of victory in the three Tests were huge 197 runs, 178 runs and 321 runs are just reflection of the quality of cricket played by the two sides, but as impressive as those margins are, it is the signs around the final result that are particularly heartening.

The basic tenet of every team sport is that the individual always comes second, that it is the team that is paramount. Actually, it is drilled into all of us in every walk of life at an early stage, but somewhere down the line, it stops being anything more than a clich . The sign of a great team is that it is always bigger than the sum of its parts, and that is exactly what I find to be the case with this young Indian Test team.

The commanding victory in Indore was the perfect way to celebrate the climb back to the No. 1 spot, and it was Indore too that allowed a comprehensive insight into the team culture that has come to take deep root in Indian cricket. The Indore Test was a perfect example not just of a complete team effort with several players pulling their weight, but also of the attitude and the commitment of a group of men that are high not just on confidence, but also self-belief and the knowledge that their skills are the best in the world and second to none.

Where do I even start? Alright, why not at the top of the tree, from the captain himself? A big score has eluded Virat since his 200 in Antigua, but you could see from the time he walked out to bat on the first morning that he was focused to play a long innings. I am not saying it was obvious he would get a double-hundred, but you could see the steely determination, you could see that he had to be dismissed, that he would not be giving it away.

He played close to his body quickly learning from the indiscretion in the first innings in Kolkata and he steadfastly refused to hit the ball in the air. Not even when Jeetan Patel sent out repeated invitations by tossing the ball up and leaving the deep mid-wicket area untenanted did Virat play the slog-sweep. It takes great discipline and courage to go against your natural grain and succeed. Like most top-class batsmen, Virat showcased those characteristics, which is a great sign both for him and for his team.

Ditto for Ajinkya Rahane. He had a hard time in the middle on the first day, the unevenness of the bounce causing difficulties when the ball was banged in short. It must have been playing at the back of his mind too that he had got out on the pull in the second innings in Kolkata, and sometimes, you tend to get caught in two minds with so many thoughts running in your head. To Rahane s great credit, he gusted through the difficult periods when he could have given into a momentary lapse in concentration. He reaped the rewards of the hard work on day two. It is funny how, with a strong mindset, even the most demanding of situations can become a pleasurable challenge.

As much as the discipline and the quality of the strokeplay, the intent in running between the wickets during the massive Kohli-Rahane association was another standout feature. It again exemplified the desire to maximize the advantage. It spoke volumes of their fitness and work ethic that they were willing to run hard twos even deep into the stand.

And what of Cheteshwar Pujara? Maybe even a month back, he was probably unsure of his place in the eleven. And look at where he is today! I am delighted that Pujara finally got the hundred he has been threatening to get all through the series, and a rapid hundred too that was exactly what the team needed when it was looking for quick runs and a declaration.

These are just three examples I have used. The great commitment Gautam Gambhir showed in the second innings in Indore, for instance. He retired hurt with a shoulder injury, but when he came back to bat on the fourth morning in his first Test in more than two years, he was positive and attacking, knowing that it was time to move on. He could have easily played for himself; instead, he did what was the need of the hour, and when you do that, the rewards flow automatically.

We need to recall the grit Wriddhiman Saha showed in both innings in Kolkata; the single-mindedness with which Rohit Sharma approached a daunting task in the second innings at the Eden; the lion-hearted spells from Mohammed Shami and Umesh Yadav, Shami even when his daughter was in the ICU during the Eden Test; Bhuvi s performance in Kolkata where he was selected in the playing eleven considering the conditions at Eden and responded by picking his fourth five-wicket haul; the persistence and accuracy of Ravindra Jadeja; and of course, the unflinching ability of Ravichandran Ashwin to keep picking five-wicket hauls as well Man of the Match and Man of the Series awards.

Crucially, each of them seemed to enjoy not just their personal success, but that of their teammates, too. Again, that is not an easy trait to inculcate. There will always be times when not everyone succeeds, when someone might go through a bad patch. Good teams rally behind their mate at that point. They go that extra yard to make him feel comfortable and wanted, because as players in a team, we do need empathy and support.

I am of the strong belief that having returned to the No. 1 position, all the ingredients are in place for Team India to stay at the helm for a long time. I say that on the basis of what I have seen in these last three weeks, skills-wise and attitudinally. The great teams are the ones that focus more inwards than on what the rest of the world is doing. They want to get better with each passing day, they want to keep learning and keep improving. They are driven, they are committed, they are hungry and passionate, they look out for each other, they have impeccable work ethics.

India are also fortunate to have an excellent support group with Anil Kumble at the helm. I can see this team going strong for long. I am both thrilled and excited at what lies ahead, and I cannot really wait for the start of the next Test series, against England, because the fearless, one for all and all for one brand of Test cricket that this team has embraced has got me hooked. Totally. 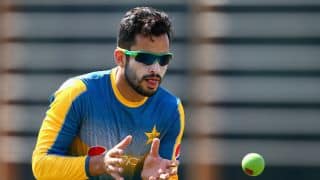