In this exclusive column VVS Laxman highlights India's over-reliance on Virat Kohli, which was evident in both innings in Vizag and in the second innings in Rajkot.

India completed an excellent and well-deserved victory against England in Visakhapatnam, riding on a collective effort from their batsmen and their bowlers, but as one has been saying all along, England are not going to roll over and allow their opponents easy passage.

The fight put up by England at various stages, and especially on the fourth evening when Alastair Cook and Haseeb Hameed were involved in an engaging opening stand, encapsulated the best of back-to-the-wall batting in Test cricket, though at every stage of that association, I always felt that England were a little too defensive, and essentially one wicket away from a collapse.

More of that later. It was particularly heartening to see Virat Kohli and Cheteshwar Pujara pile on the runs in the first innings because as much as the toss itself, it is the first-innings runs that prove decisive in the subcontinent. Pujara looks a completely different batsman now from, say, even four months back, and that has much to do with confidence, because even when he was struggling for runs and eventually lost his place in the eleven, his skills have not deserted him. He is very good with different partners, which is another encouraging sign for a batting unit that has developed a solid core with plenty of experience.

Virat was once again on top of his game in both innings and particularly in the second knock when England s pacers employed the cutters to great effect. In conditions where there was little swing and no seam, the cutter was the best option, and Stuart Broad and James Anderson, the two stalwarts, posed numerous questions to the Indian batsmen. Virat had all the answers, batting as if on a completely different surface against a totally different attack.

I was also very impressed with the attitude, as much as the skills, of Jayant Yadav. Right from the beginning, he looked like he belonged at the Test level, and that is the first sign you look for in a player. He scored runs, took wickets and played a big part in an important run out too, but what really caught my attention was how he farmed the strike in the second innings to ensure that Mohammed Shami was not too exposed to the fast bowlers. In his first Test, he would have been perfectly justified in just looking after himself. In also looking after his mate, he showed great spirit and maturity, and I can see him growing in stature with the passage of time.

India s bowlers were all consistently good, and while you expect the spinners to do the damage, I thought Shami and Umesh Yadav bowled well. Their control was good, and they also consistently topped 140 kmph, which was wonderful to see from an Indian new-ball pair. Then, they also extracted reverse swing, and produced timely breakthroughs through some wonderful deliveries like the ones Shami bowled to get rid of Cook on the first morning, and Joe Root on the final day.

England did not have too many great batting moments, apart from Ben Stokes and Jonny Bairstow in the first innings, and Cook and Hameed in the second. The application shown by the two openers was laudable, and young Hameed looks one for the future. Even in Rajkot he stood out with his poise and his composure. In more difficult circumstances in the second Test, he looked totally at home until being undone by a brute of a delivery from Ashwin. Root batted well for his 53 in the first innings and until he was lured and deceived by Ashwin.

England will not publicly state so, but they must be ruing their ultra-defensive tactics. For a set batsman, it might be slightly easier, but when you are only scoring 1.5 runs an over and the ball is doing things, a new batsman will find it extremely daunting. As Bairstow showed late in the chase, it was not impossible to be positive. I was surprised and somewhat disappointed at England s lack of intent in the second innings, though I am sure they will regroup and come out stronger in the third Test in Mohali, where I expect Jos Buttler to come in for Ben Duckett.

The other notable disappointment was England s spin bowling. In conditions more responsive than Rajkot, their spinners were all a letdown even though Moeen Ali got three wickets in the first innings and Adil Rashid four in the second. For them to remain competitive in what is still an open series despite India leading 1-0, I feel the spinners must lift their game considerably.

India s biggest concern will be an over-reliance on Virat under pressure, as was evident in both innings in Vizag and in the second innings in Rajkot. There is only so much load that must be placed on one person. As much as Virat is relishing the responsibility, he must receive support from the rest of the group, particularly when India are playing with only five batsmen. England would have realised that you cannot afford to put down a batsman of the calibre of Virat and get away with it. Spilled on 56, he made 167 in the first innings to almost make it: game over.

India had learnt those same expensive lessons in Rajkot where they dropped five catches and saw England post 500-plus. After that dismal loss in Mirpur to Bangladesh, England could not have hoped for a better surface on which to rediscover confidence. Cook was out of sorts in the first innings but battled back to make a hundred in the second, while Root, Moeen and Stokes all applied themselves well and backed their natural game to make hundreds. India s bowling was disciplined but rendered toothless by the poor catching. The lessons were well learnt in the second Test, though they did put down one catch and there was a missed stumping too.

I thought the way Murali Vijay and Pujara set about the task of chasing down England s 537 was brilliant. Vijay in particular needed the century. He has been getting starts and getting out, and therefore needed something substantial for his own confidence more than anything else. His was another excellent example of self-denial against an attack that was again a spinning letdown, and that was bailed out by the all-round performance of Chris Woakes.

There was some artificial excitement on the final afternoon at Rajkot, but like I said, Virat s towering presence kept England s victory aspirations at bay. This has been a hard-fought, entertaining series so far, and the margin in Vizag, 246 runs, does not really tell the story of the fight England put up. If their spinners improve significantly, they could run India close. As for now, they could not have asked for a better venue than the PCA Stadium in Mohali to try and square the series. The pitch may not exactly thrill their pacers, but at this time of the year there will be something for the quicks both in the morning and late in the evening. Anderson and Woakes will try and exploit that to the hilt, and England might be tempted to even play another seamer to go with Stokes, especially given the limited role Zafar Ansari played in the second Test. 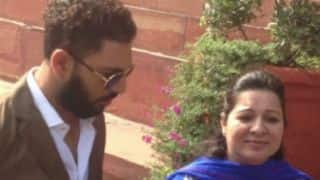