Walker did not play at the highest level of cricket, but his would certainly rank among the greatest displays of mental strength by a cricketer.

Cricketers have overcome handicaps to succeed at various levels. Of them was one Walker, on whom The Times ran a report on August 16, 1850. Abhishek Mukherjee narrates a slice from a life that exceeded cricket.

Buster Nupen, Mansur Ali Khan Pataudi, and Colin Milburn all lost an eye. Eddie Barlow was woefully short-sighted. One of Len Hutton s hands became visibly shorter than the other following a surgery. And Fred Titmus and Martin Guptill had toes chopped off, while Parthiv Patel lost a finger. Tony Greig was an epileptic. Bert Ironmonger lost half a finger of his bowling arm. Bhagwat Chandrasekhar battled polio. Wasim Akram and Dirk Wellham are known diabetics.

They all played cricket despite that. There have been cricket matches between one-armed and one-legged cricketers. Despite losing an arm, Frank Chester went on to became one of the greatest umpires of all time. None of them, however, matched the skills of Amir Hussain Lone, the armless cricketer.

According to an 1850 report on Westmoreland Gazette, however, it turns out that Lone was not the lone person (sorry, could not resist) to do this.

There was a youth named Walker from Burneside (a nondescript Cumbrian village), who had lost both hands after an accident at a paper mill. However, that had not deterred him from playing cricket. The report narrates his performance for the young cricket club of Burneside and the junior members of the Kendal Club . An age-group match or a second XI match, perhaps: we will never know.

Of course, he could not bowl, but he could take catches at reasonable heights: he let the ball hit his chest and used the stumps of his arms to make sure it did not bounce off. If it was a ground shot he actually managed to throw it back with remarkable precision by means of his boot.

The report also mentions that Walker batted very tolerably, and certainly most extraordinarily for his means , though it does not mention exactly how he did that. Just like Lone over 150 years after him, he probably held the bat with the stumps of his arms.

No, it was not the highest form of the sport. But it would certainly rank among the greatest displays of mental strength by a cricketer. 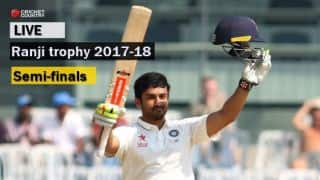