Waqar felt that for Pakistan, it was about putting it all together and coping with the pressure.

In his third stint as part of the coaching staff for the Pakistan team, Waqar Younis, in his latest role as the Head Coach of Pakistan, wears the battle hardened look of an army general who is determined to take his troops through the thick of battle and onto the pinnacles of success.

A veteran of 87 Test matches, Waqar in his playing days picked up 373 scalps and took 22 five wicket hauls in Tests, whilst also forming a fiery partnership with another legend Wasim Akram. With a coach of his pedigree at the helm, it is no wonder that there has been tangible improvement in the form and fortunes of the Pakistan team after a dip against Sri Lanka.

As Pakistan enjoy a period of relative success in their overall standing in the game, Waqar Younis spoke to PakPassion.net about his latest association with the Pakistan team, his impressions of Rahat Ali, the state of Pakistan’s fast bowling resources, and also looked forward to the 2015 World Cup.

Whilst Waqar tasted unbridled success and fame during his days as a player, he was one of the lucky few who were able to transform their on-field achievements into an equally successful career as a commentator. The decision to take over as Pakistan Head Coach after Dav Whatmore’s departure, was obviously one that he did not take lightly as he explained “I thought a lot before I submitted my application for this position. I had a long chat with my family as it would not be easy for them. It’s doubly difficult especially when you have a young family. But we have made this decision and we are sticking with it. It can be tough for the family but we are doing what we can to make this work.”

The recently concluded Test series played in the UAE where Pakistan whitewashed Australia and drew with New Zealand have seen Pakistan move to a respectable 4th position. However, not so long ago, Pakistan were at the receiving end of a 2-0 drubbing at the hands of Sri Lanka. That series also happened to be Waqar Younis and his coaching team’s debut series and would have served as an eye opener for the task ahead. Waqar on his part feels that whilst the result of the Sri Lanka series was a shock, up and downs are part of life and can serve as good learning experiences stating that ”It’s early days so far but I guess looking back a bit, I would say that no one likes losing games and the loss to Sri Lanka where we could have easily won was not the most pleasant thing I have experienced. But then, I also take that in a positive manner. It was a jolt for me and told me that this isn’t an easy gig and I would need to dig deep here. Yes, we lost two Test matches but I feel we learnt a lot from there.”

Hopes of many a Pakistan fan were raised when Waqar accepted the role as it brought the possibility of Pakistan bowlers being developed as world beaters under the expert tutelage of one of the supreme proponents of the art of reverse swing in the shape as their coach. If proof was ever needed of this theory in practice, one would look no further than Rahat Ali’s progress during the recent series in the UAE. Whether Rahat Ali will be able to emulate Waqar in the long run is yet to be seen but the young bowler’s progress hasn’t gone unnoticed by his coach.

“When the Australia tour started, we were very short of experienced bowlers. Our experienced bowlers like Wahab and Junaid had both broken down with injuries and we had decided to keep Irfan away from the Test level to safeguard his fitness. So, it was a difficult time, but then, this is the kind of thing that excites me the most as a coach. Here we have a youngster, Rahat Ali, going out there improving himself in front of my eyes. I have seen tremendous improvement in Rahat over the last five to six weeks. He has learnt a lot. His fitness has improved and he’s become smarter. If you look back the very first spell that he bowled here in Dubai, he was all over the place. But we kept talking to him and motivating him with a lot of energy and he responded. But then it’s not only him. All the other bowlers also responded and in particular Zulfiqar Babar and Yasir Shah bowled superbly and helped us win the Test series against Australia.”

The recent lack of out-and-out fast bowlers or the express 150kph plus speed merchants has been a matter of concern for Pakistan cricket followers who had previously been used to seeing such bowlers queuing to play for Pakistan. The lack of such bowlers does not worry Waqar who feels that being a good bowler is more about control than just the speed of the delivery.

“What I will say is that we have been spoilt in the past. It sounds strange but I am not frustrated at all by this fact. I’ll be satisfied as long as I have decent bowlers who can put in the effort and are ready to bowl a disciplined line and length. So, it’s not just about pace but also about the discipline.”

“I would say we were very lucky in the 1990s when we had Shoaib Akhtar bowling and later on, also to some extent Umar Gul who was also bowling fast. In recent times, we have Wahab Riaz who bowls briskly but as I said, you have to be disciplined. You cannot go out there and try and bowl 150kph and go all over the place as control is crucial.”

Many who witnessed Waqar in his prime would have abiding memories of the trademark “toe-crushing” deliveries, crashing into the base of the stumps akin to missiles. It then stands to logic that Pakistan bowlers under his supervision would be able to develop the same capabilities. Not so, says Waqar as reverse swing without pace and the awareness of batsmen in today’s world are all contributing to the relative ineffectiveness of this weapon, as he explains “When you speak about reverse swing then you really need to link that up with the pace of the delivery. We all saw reverse swing in the recently concluded series. We had Mitchell Johnson do it and some Pakistani bowlers did it also. So it did swing. However, you need 150 kph behind that swing to beat the bat. And on top of that, most of the batsmen know how to bat against such bowling. In our days, we were lucky as the batsmen didn’t have a clue and they were still learning to play against such bowling. Now the batsmen know so you have to be very pacy or you have to be extremely smart to beat the bat.”

It is no secret that Pakistan’s recent fast bowling hopes have been centred around the tall pacer Mohammad Irfan. With his 7’1” height, he has the ability to deliver some unplayable deliveries and the prospect of this bowler helping Pakistan to glory in the upcoming 2015 World Cup has not escaped the attention of the Pakistan team management. He is being used sparingly in the run up to the ICC’s mega event, an approach which has the wholehearted backing of Pakistan’s Head Coach.

“Irfan is 7’ 1” and it is very easy to breakdown when you are that tall and with his structure. The weather may be better in Dubai in recent times but as you may recall, Irfan played against South Africa in brutal heat and you could see that it was affecting him. Remember that he is not a young player where you could say that, yes, lets carry on like that. The fact is that he is above thirty and it’s not easy for him. The World Cup is around the corner and he has that X factor that we need him to be as fit as he can be which is why we are extra careful in using him.”

Like any other professional, Waqar Younis knows well that his task is a tough one but he is aware that he is backed up by a solid team of professionals, some of them he has known and worked with in the past and his confidence in their abilities comes through clearly as he states “I have always felt that the guys who played cricket in the ‘90s should come forward and help Pakistan cricket come up and improve its standing. It’s great that Moin Khan is around with Mushtaq Ahmed, Ijaz Ahmed and Mohammad Akram as well. It’s good that these are young guys and they understand the demands of the modern game and can help the Pakistan team reach its full potential.”

Even after a passage of over twenty two years, the glorious World Cup campaign of 1992 remains fresh in many Pakistani minds and with the World Cup returning to the scene of one of the greatest triumphs in Pakistani cricket, Waqar and his team are clearly looking forward to this challenge. Whereas there recent one day international form may not reinforce that belief in many minds, Waqar Younis feels that it’s important that the team carries the belief of lifting this trophy into the tournament.

“We are all excited about this event as is probably everyone else in the cricket playing world. It’s the cricket world’s top event and everyone has their eyes on the trophy so why not us? We are trying to take this belief in the dressing room. We have the potential, we have the talent and the skills. It’s just about putting it all together and coping with the pressure.”

For Waqar Younis, personally, the 1992 World Cup would bring in painful memories of missing one of the biggest opportunities due to an unfortunate injury. Does he have any regrets about that missed opportunity? “No” comes the quick reply “That doesn’t bother me – All I want is Pakistan to win the World Cup and that’s all that matters.” 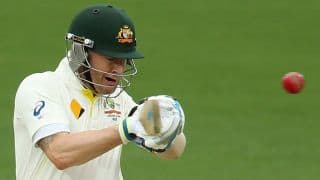