Sandeep Lamichhane, 17, ripped through the Kenyan top and middle-order to claim his first five-wicket haul in List A cricket.

Like Afghanistan, Nepal, too, are scripting a cricket fairytale. It’s perhaps too early to draw conclusions, but Nepal’s nail-biting final-ball 3-wicket win over Kenya in the 10th match of ICC World Cricket League Division Two at Windhoek certainly took them a step closer to the World Cup Qualifiers in Zimbabwe next month. Chasing 178, Nepal needed 6 off the final over. They got 4 off the first 3. Then the well-set Rohit Paudel was run out for 47. A dot followed, making the equation 2 off the final ball. Nehemiah Odhiambo had all the experience but that couldn’t stop Sompal Kami play one to the leg-side and sprint back for a second.

But before all that, it was Sandeep Lamichhane guile with the ball that had reduced Kenya to a paltry 177 for 8 in their 50 overs. The 17-year-old leg-spinner ripped through the Kenyan top and middle-order to claim his first five-wicket haul in List A cricket.

Here’s how it happened:

Just how good is @IamSandeep25 looking at #WCL2? Here’s all five wickets from his magnificent spell against Kenya, his 5/20 the best bowling figures for Nepal in List A matches! pic.twitter.com/8WiFUUeRei

Lamichhane was 16 when Michael Clarke had invited him to play at the Sydney-based Western Suburbs District Cricket Club. He also starred in the 2017 Asia Cup. In 2018 he became the first cricketer from Nepal to get an IPL contract. He was bought by Delhi Daredevils.

He tops the bowling charts of WCL Division 2 with 14 wickets from 4 matches at 6.92. Nepal need to beat Canada on Wednesday to advance to the World Cup qualifiers in Zimbabwe, next month. 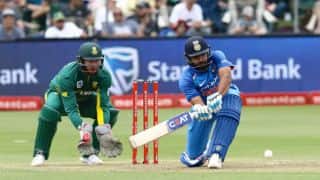