January 10, 1935. One of the weirdest Tests ever played came to an end at Barbados. Arunabha Sengupta looks back at the rain affected game which saw horrendous sticky wickets, curious batting orders and mind-boggling declarations.

It was possibly the weirdest Test ever played.

Neville Cardus had famously said that the elements were the presiding geniuses of the game. And never did the volatility that marks the interplay of rain, sun and wind dictate the course of the game as much as it did at Barbados during this Test.

Bridgetown was drenched as rain poured incessantly. As Jackie Grant flicked the coin upwards, the eyes of the skippers were pensive as they followed its flight all the way up and down. The toss was of paramount importance.

Grant was leading a side of major talents, vastly improved since the West Indians had visited Ole Blighty in the summer of 1933. England, in contrast, had erred in their patronising attitude towards the islands. Bob Wyatt had brought along a side that included some big names, but less than half of the 14-member touring party were regular members of the England side. As Wisden recorded, “it could scarcely be regarded as representative of the full strength of England”.

They had already been shocked to concede a 212-run first innings deficit in the tour opener against Barbados. However, in the second match, against the same opponents, the great Wally Hammond had struck an unbeaten 281. The English spirits had risen even as the clouds had closed in on the island of Barbados. Incessant rainfall had continued over the days and by the time the two captains walked out, the conditions were unplayable.

And it was Wyatt who smiled once the coin landed. Without hesitation, he put the hosts in. Ken Farnes charged in, and the ball shot up alarmingly from the drying wicket.

George Carew went for a duck, Clifford Roach for 9, Charlie Jones for 3 and the elegant Derek Sealy for another blob. Farnes had 4 for 15 and the Caribbean men were struggling at 20 for 4.

George Headley was dropped twice, and then showed his exceptional talent by stubbornly resisting in those unplayable conditions. When the pace bowlers were rested, England had two debutants ideally suited for the circumstances. Eric Hollies, who 14 years later would gain immortality by dismissing Don Bradman for a duck at The Oval, spun his leg breaks sharply, aided by uncertain bounce. And there was George Paine, the Warwickshire slow left-arm spinner, who would never play another series, but on that day did make them turn away from the batsmen disconcertingly.

The Grant brothers — Jackie and Rolph — were snared by Hollies. Leslie Hylton used the long handle effectively for a while, but was stumped trying to hit Paine out of the ground. And Headley’s innings — a great one under the circumstances — came to a sudden end after two hours of extraordinary application when he ran down the wicket to see Cyril Christiani refusing the single.

Paine quickly accounted for Puss Achong and Manny Martindale and the West Indians were all out for 102.

But, on that pudding of a wicket the Englishmen fared no better. Wyatt and Maurice Leyland boldly went in first and were dismissed by nasty deliveries from Martindale. Patsy Hendren did not survive long either. Both Martindale and Hylton bowled at a lively pace and the balls flew off the pitch.

It was soon 54 for 5, but Headley’s resistance was being mimicked by the corresponding great in the England side. Hammond batted with remarkable poise on the virtually unplayable wicket. It seemed that the deadly disease that had almost killed him during his first visit to the islands was a thing of distant past. He played late, watchful and when opportunity presented itself drives boomed off his broad blade. Jack Iddon settled down at the other end, and the day ended with England on 81 for 5. The match hung on a knife’s edge.

But rain fell all through the night. The next morning, the ground was littered with small puddles and pools of water. The players sat in the pavilion, morosely watching the efforts to make the outfield and the wicket suitable for play.Ultimately, hard work and some mercy of the weather gods allowed play to commence after tea.

And in the first over, Hylton dismissed Hammond and Errol Holmes without the addition of a run. Wyatt, face grave and mind hard at work, called his batsmen in. England had declared at 81 for 7, 21 runs in the arrears. The captain wanted his bowlers to have a go at the home batsmen when the conditions were at their worst.

Jackie Grant countered the move by reversing the batting order. Rolph Grant opened the innings with Hylton. However, Big Jim Smith, who had bowled seven fast and accurate overs in the first innings without success, now removed Grant for a duck.

Martindale was sent in at No. 3 and was trapped leg-before without scoring.

Whether Achong was linked to the term Chinaman or not has never been conclusively proven, but there was little doubt about the limited batting credentials of this unorthodox left-arm spinner of Chinese ancestry. Yet, in he walked at No. 4 and immediately Smith sent his stumps cartwheeling. The score was 4 for 3.

Wicketkeeper Christiani was in next and put his head down, playing with a dead bat. Hylton showed commendable application and carefully batted the day out. At stumps, West Indies were 33 for 3, 54 runs ahead.

That night the rain was heavy. When the players reached the ground, the pitch was submerged. Possibility of play looked bleak, but suddenly the sun made an unexpected appearance, in all its brightness and glory. The pitch dried fast and a strong breeze added to the vagaries of the conditions. When play began at half past three, it was perhaps the most difficult period for batsmen in this incredible match.

At 40, Smith pegged back the stumps of Christiani, and the first regular batsman walked out in the form of Roach. Seven runs later Hylton’s excellent resistance came to an end. This pace bowler, who later became the only cricketer to be executed for murder, found a ball shooting across the turf to trap him plumb.

Headley came out amidst hope and applause. But, four runs later, Farnes sent this great West Indian batsman back for a duck. Tea was taken with the hosts on 51 for 6.

The score has to be looked at in the proper context. Only four wickets were left, but since the batting order had been reversed the five who remained were all frontline batsmen. Roach, Carew, Jones, Sealy and Grant formed a handy lot.

Yet, Jackie Grant gambled. The conditions were worst for batting and he wanted his bowlers to use them to the hilt. He declared the innings. England were left with 73 runs for victory.

Hylton and Martindale charged in, the ball rising alarmingly yet again. And in a ploy to hit their way out of trouble, Wyatt sent in Farnes and Smith.

The ball remained dominant. Smith snicked Martindale at three. At seven, Hylton sent back Farnes. Errol Holmes, sent in with the same instructions, launched Hylton into the crowds with a classic slog before being sent back by Martindale.

The specialist batsmen now came in. Hendren counterattacked in his bold, impish manner that included a magnificent six off Hylton. But Leyland fell to the increasingly threatening Martindale to make it 29 for 4. The reassuring form of Hammond now came to the crease. Runs were added briskly.

At 44, another vital blow was struck as Martindale went through the defence of Hendren. And five runs later, Paine, who had been sent in ahead of the captain, was dismissed by the same bowler. The young local paceman was breathing fire, looking unplayable by the minute.

Whether Puss Achong was linked to the term chinaman or not has never been conclusively proven, but there was little doubt about the limited batting credentials of this unorthodox left-arm spinner of Chinese ancestry

However, at the other end, Hylton erred in line and length. The hit-or-miss tactics of the Englishmen seemed to have unsettled him. Wyatt came in and negotiated some hostile pace with exemplary defence. And at the other end, Hammond was majestic. At this critical period he mixed uncanny reflexes with excellent technique to play a short innings far more valuable than some of his double hundreds. The score progressed, mainly due to the efforts of the great Gloucestershire professional. Grant did not change the bowling, in the hope of just one more wicket. Ames and Iddon sat padded up and tense in the pavilion.

After 16 overs had been bowled, England were 4 runs away from victory. Martindale raced in to start his ninth over on the trot. And off the third ball, Hammond leaned forward and launched into a spectacular drive. The ball flashed over extra-cover and carried all the way over the fence. England had won by four wickets in spectacular fashion.

Hammond walked back with a rare smile, a precious unbeaten 29 under his belt. Martindale, with five for 22 in a losing cause, wiped the honest sweat off his exhausted brow. It had been the wildest Test in history.

If the clouds and rain had managed to cover the weaknesses in the England team at Barbados, no such respite was on offer at Trinidad. Martindale and Hylton were joined by the simmering talent of Leary Constantine, released from his Lancashire League commitments. Apart from five wickets in the game, the legendary all-rounder scored an electric 90 in the first innings. The hosts triumphed by 217 runs.

After a draw in Guyana, West Indian cricket scripted history in the fourth and final Test at Kingston. Headley batted over 8 hours for a magnificent unbeaten 270 to take the hosts to 535. Constantine and Martindale did the rest, restricting England to 271 in the first innings during which Martindale broke Wyatt’s jaw. The visitors were blasted out for 103 in the second.

There was rejoicing in the islands. The West Indies had beaten England in a series for the first time. 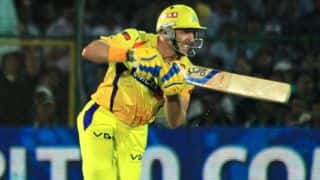 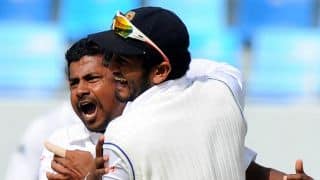