Twice in two days, West Indies had an opportunity to dictate proceedings in their ongoing first Test against India at Kolkata, but they squandered both opportunities. Their fatigue in the field when the Indians fought back was evident by the way they were fielding. Abhijit Banare elaborates on why West Indies will struggle to become a champion side despite having quality players. 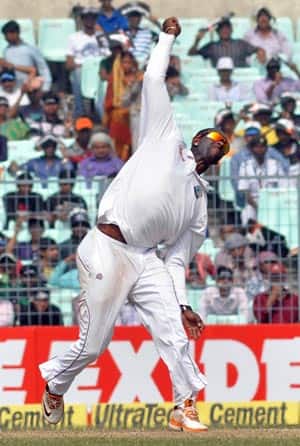 Twice in two days, West Indies had an opportunity to dictate proceedings in their ongoing first Test against India at Kolkata, but they squandered both opportunities. Their fatigue in the field when the Indians fought back was evident by the way they were fielding. Abhijit Banare elaborates on why West Indies will struggle to become a champion side despite having quality players.

Cricket has produced endless examples where a match has been won with mindgames even before the actual play has started. An extension of the same thought lies in how champion sides always look good to come out of a tough situation. And sides with less belief in themselves, however hard they try, fail to seize the opportunity. West Indies trapped themselves in the latter category, having let two potentially match-winning possibilities slip out of hand.

They defied an uneven pitch in the first session of the first day to put up a solid start before they squandered the opportunity by opening the floodgates with a needless run-out. And the closest they could have closed the game in their favour was before 11.00 am on Thursday when they floored the solid Indian batting. At 89 for five, on a track which had a lot to offer, West Indies will surely look back to and say there was a match-winning situation at hand and they don’t know when it slipped out.

Skipper Darren Sammy showed great leadership in defying conventional method to start with Shane Shillingford. Perhaps he knew what abilities, the tall spinner could offer. However, as the game progressed and West Indies got a hold of the proceedings, Sammy shut himself up from utilising a plan B to create an opportunity. And it was not surprising to see that the wait-and-watch policy reached to such a level that the drooping shoulders and hung-up appearance was evident in most of the players’ fielding. One of the reasons why their opponents are a champion One-Day International (ODI) side is because they will keep coming at you. Even during the second session of the second day, Mahendra Singh Dhoni released the pressure by hitting the boundaries and kept the score moving. By the time West Indies realised, Dhoni’s aggression had considerably reduced the deficit.

In a span of just 50-55 overs, West Indies lost their way to an extent that from winning the match they are staring at a possible defeat. Giving up on a situation in 50-55 overs is surely a concern. While Rohit Sharma and Ravichandran Ashwin were eager to push India’s score, the lack of aggressive mindset from their opponents reduced one concern from the batsmen’s mind as they settled in. Even if West Indies pick up early wickets on the third morning, the damage has already been done. On Indian wickets where vicious turn is on offer, working on a lead beyond 100 is equal to the wounds inflicted by follow-on. In fact, it was India who were facing such a situation.

By lacking the shrewd ability to press hard, West Indies have exposed their fallibilities that they can surely win a session in a Test match but not build on the momentum to win more sessions and turn them into match-winning situations.

One of the signs of feeling mentally exhausted is being dependent on the most successful trick that has worked. In crisis we all looked back to check what is the solution that last helped to crack this. For Darren Sammy, Shillingford was that solution. Time and again he ended up going back to the off-spinner. And the change of ends which was sans the footmarks for Shillingford didn’t help either. When you are up against a talent like Rohit Sharma who has realised his value, it takes pressure exerted from more than one bowler to make more inroads. These are signs of a team which is on the backfoot, like the time when India toured England in 2011 and depended on Rahul Dravid to deliver every single time.

The fact that Sammy has five bowlers — including himself — in the team, and 41 per cent of the overs were bowled by just one spinner, doesn’t show up well. Sammy’s lack of faith in Veerasammy Permaul was evident as well.

West Indies have no doubt, improved and turned out to be a much better side in recent years. However, the hunger to be a formidable side and seize winning moments will come when they maintain the intensity to keep coming hard at the opposition as a team.