Andrew Caddick, who took four wickets in five balls in the West Indies second innings, celebrates after helping England win the fourth Test match by an innings at Headingley in Leeds on August 18, 2000 © Getty Images

The most commonly heard reasons from captains for opting to bat first in a Test match is to either pile up runs upfront or avoid a situation batting fourth when the wicket is likely to deteriorate. West Indies skipper Jimmy Adams had the latter reason when he won the toss in the fourth Test at Headingley.

The record of the Yorkshire ground clearly suggested assistance to the pacers, which is further backed by the quality pacers that the county supplied to the national team over the years. Adams had thus a lot to cheer about, boasting of fast bowlers in his team like Curtly Ambrose, Courtney Walsh with support from Reon King and Nixon McLean. Expectedly, Ambrose and Walsh were deadly, but the Test was over inside two days — West Indies suffered an innings defeat.

Local boy Craig White had been recalled into the English side in this series to strengthen the bowling as well as chip in with the bat down the order. As every success story has a moment of hardship to relate, White too had a tragic tale to tell. Just three months prior to his selection, the 30-year-old suffered a blackout only to be found in a gutter the next morning. Countless examinations failed to reveal the cause. As White was quoted by BBC, “All the tests proved what the trouble wasn’t — but not what it was.” 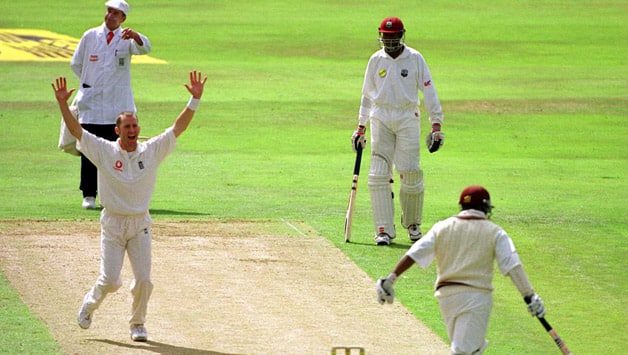 But now all that was in the past. On his debut appearance at his home ground, White rocked the West Indies on the first morning under blue skies with a 17-ball burst to claim three wickets. Wavell Hinds, Brian Lara and Adams — the pillars of the side were done in by White, dismissed in consecutive overs. Another Yorkshireman from Barnsley, Darren Gough, too threatened to further strangle the opposition. The packed Headingley spectators were thoroughly enjoying their local players dominating the proceedings as the pavilion route saw enough traffic with the frequent fall of wickets. White further dismissed McLean and Walsh to complete a five-for, while Gough struck thrice and Dominic Cork chipping in with two. The only substantial partnership was between Ramnaresh Sarwan (59*) and Ridley Jacobs (35) of 68 runs as West Indies were all out for 172 in just 48.4 overs.

England knew that Ambrose and Walsh would come menacingly at their batsmen. Ambrose with 398 wickets before the start of the Test began the proceedings and got to the 400-mark within quick time, removing Marcus Trescothick and an otherwise stubborn Mike Atherton in his successive overs. Skipper Nasser Hussain and Graham Thorpe, then stayed put against the Ambrose-Walsh duo, before breathing some fresh air seeing King looking out of sorts and an ineffective McLean. With a small total in hand, Adams had little choice but to ask his workhorse to chip in and Walsh gave a twisted pinch to England with two quick wickets of Hussain and Thorpe. He further hammered the English confidence towards the end of first evening sending Alec Stewart back.

The pacers had lived up to the expectations. The capacity crowd went back with bitter-sweet moments, having witnessed 15 dismissals — including five of the home team. Yorkshireman Michael Vaughan and night-watchman Andrew Caddick found themselves at the crease when play ended on Day One. Vaughan would have shadow practiced all night driving pitched up deliveries from Walsh and Ambrose and fending off the shorter ones.

What unfolded on Day Two was quite sensational. Caddick, tried to see off few deliveries before nudging one into Jacobs behind the wickets. England were 124 for six — still 48 behind. England were soon into survival mode, adding bits and pieces. Vaughan along with Graeme Hick then presented stubborn resistance. Hick and Vaughan added 98 for the seventh-wicket partnership, thanks to some easy pickings through McLean and King. It was finally the left-arm spin of Adams which enticed Hick to step out of the crease and end up getting stumped. Vaughan however kept accumulating and scored a gutsy 76 (his highest score then) as England managed 272 — a sizeable 100-run lead under testing conditions.

All over for West Indies in little over two hours

Openers Sherwin Campbell and Adrian Griffith came out to bat with partial cloud still hovering over the skies. Gough, in good form throughout the series, drew Griffith forward and bowled him through the gate in the third over of the innings. Gough then trapped Hinds leg-before for a duck to grab two wickets in successive balls. He then delivered the biggest blow for the West Indies by having Lara out leg-before in his fifth over. West Indies were now 11 for three.

After tea, Campbell became Gough’s fourth wicket with the score on 21. Sarwan fought alongside  Adams for around 10 overs before the West Indies’ captain was bowled by Cork.

With five down for 49, West Indies were heading for a crushing defeat. It was now time for Caddick to join the party. He got his first victim of the innings when a straight delivery trapped Ridley Jacobs right in front of the stumps. 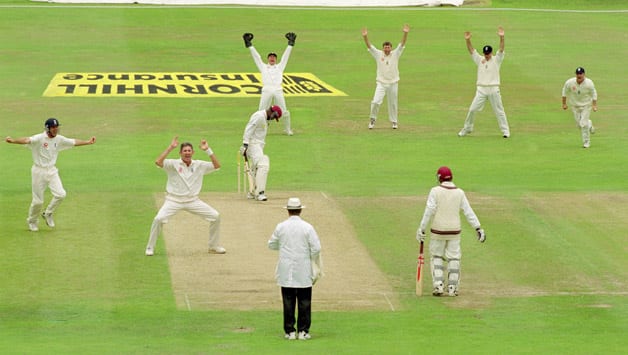 The audience’s enthusiasm was further extended when McLean’s stumps were all over the place on the third ball of the same over. West Indies’s defeat was imminent, only the margin was to be decided. Caddick now ran in and pitched exactly at the same spot as the previous one and ended up getting the same result — this time Ambrose losing his wicket. West Indies were now 52 for eight.

It wouldn’t be an exaggeration to say that the England team and Caddick in particular were bemused by the proceedings post tea.

Now with two left-handers bowled in consecutive deliveries, Caddick was on a hat-trick and the spectators vociferously cheered him as skipper Hussain set an arc behind the wicket — five slips and two gullies. Caddick rolled in, pitched it up at a good length and it moved away from the batsman. King had no idea of it as he missed the ball by a yawning margin trying to defend it. The pumped up spectators held their hands on their head in exasperation. However, Caddick laughed all the way soon as he pitched the ball further up and bowled King. It was a crazy atmosphere all around as the bowler had picked up four wickets in five balls to bring England at the doorstep of victory inside two days. The formalities were completed when Walsh’s stumps were shattered by Caddick two overs later.

Such was the disbelief that Mark Nicholas’ excitement was matched with a submissive disappointment in Richie Benaud’s voice delivering his trademark line, “It’s all over. Andrew Caddick five wickets…”

It was a neat scorecard with each bowler hunting marked territories; Gough picking the top four, Cork placing himself in the middle followed by five in-a-row by Caddick.

Caddick recalled the moment during an interview for the official English and Wales Cricket Board (ECB) website in 2012 by crediting the tactic of running against the slope. “I always preferred running up a gradient because it helped me set and I could attack the crease. Running down the hill at Lord’s and running down the hill at Headingley, I tended to run away, I tended to lose a bit of composure and it didn’t really come out right,” Caddick was quoted as saying.

A few weeks earlier too, Caddick had plotted the downfall of the Windies, when they were bowled out for a paltry 54 and he had figures of five for 16 in the second Test.

“The year 2000, for Test cricket, I think was a historic moment for England. The West Indies were still a very competitive side and I think England as a team were starting to gel very well for the next two, three years. England gelled very well as a side and subsequently did very well under the Nasser Hussain’s captaincy,” he added.

England eventually went on to win the fifth Test at The Oval to complete a 3-1 win, their first at home since Duncan Fletcher took over.

If West Indies till the 1980’s where a force to reckon with, the team in the late 1990s was an iconic symbol of inconsistency. While they started the series with a thumping innings victory and also had an innings total of over 400 in one more Test, at the same time they were thwarting with innings of 54 and 61. Go ahead and Google ‘West indies all out for’ and chances are that you might have more than these two options to choose from, which backs the above mentioned thought.

While English fans were over the top, only a selected few individuals were boggled at an unexpected situation. The ticket prices of Lord’s and Leeds Test were to be refunded. Not one but a revenue worth packed stadium was to be returned as the matches had ended well in advance.

It was also a phase of ridicule for England who were criticised for their poor performances. Under Hussain, they were slowly transforming into a potent force. The Wisden Trophy 2000 brought England back into the fore and West Indies sunk further.

Man of the Match: Michael Vaughan

Virender Sehwag turned down offer to play for Essex: Report